The Bookman's Tale:  fiction and then again not 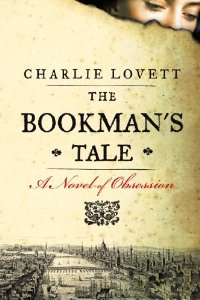 Charlie Lovett's The Bookman's Tale goes on sale May 28th

When one thinks about book theft, it may seem far-fetched, but not to the experienced bibliophile. To many, books are as powerful as a narcotic. To the larger, uninitiated community, such material may appear unimportant and not valuable. When one sees something important, the question becomes, does the person with knowledge have an obligation to educate the person that doesn’t? Books have always presented a moral dilemma. Those that know can reach across, and acquire something for nothing, or even steal something they know to have extraordinary value. Where is the line? Charlie Lovett's The Bookman's Tale illustrates just how hazy that line can get as both villains and heroes are guilty of theft in this tale of greed, love, old books, and the literary world's greatest mystery.

The Bookman's Tale is two stories that eventually become one in resolution. The timelines at first are juxtaposed, one driven by greed, the other by love, but with a common denominator of books. Those who love old books and tales about them will find this story compelling.


One story is of a manuscript play said to have been the inspiration for a work by Shakespeare that, even in his day, was thought important enough to collect by the greatest English book and manuscript collector of the era, Sir Robert Cotton.  He did not keep the copy for it was stolen from him and would through generations be lost and found again.  As with so many books that once were prized, subsequent generations with less information and less interest see their prizes slip away into the hands of the always keen bookseller who, because it is apparently in their nature, offer little or nothing for what gems they detect, in fact just enough to pry them away from gullible sellers.


The second story begins in 1995, with a heart-broken American bookseller in England to find peace from the disaster of a deeply held love who has died.  Here, in pursuing his interest in rare book selling, he chances upon an image he believes to be of his now deceased wife.  That thread then securely stitched, he then by luck, happenstance, and perhaps divine intervention, begins to piece together the story of a long lost book and its potentially important place in literary history.  In so doing, he details enough misdeeds to fill out a Republican Party platform.


The story is artfully told and contains enough facts and references to make the story always shimmer with possibilities. These possibilities carry the reader forth breathlessly asserting, "this can not be true," but plunging on because the whiff of possibility demands its hearing.


Those who love books and their stories are going to enjoy this tale.  I had no time to set aside for it, but once begun, it laughed at the thought I would put it down. I could not and suspect neither will you.


My copy is a reviewer’s copy. Regular publication begins on May 28th. You can pre-order from the author and sundry sellers including Amazon.  Note the title has been used before.  The book I’m writing about is written by Charlie Lovett.  In 2009 Ronald Blythe issued a book under the same title, as did Berry Fleming in 1991.


Here is a link to Amazon.


Here is a link to the author's site.