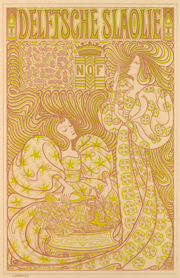 
American highlights that span the 20th century are Clarence Coles Phillips’s World War I conservation poster Light Consumes Coal, circa 1918 [estimated $4,000 to $6,000]; a group of three of Leo Lionni’s Keep ‘em Rolling! Posters from WWII [estimated $2,500 to $3,500 for the set]; Ben Shahn’s campaign poster for Franklin Roosevelt, Our Friend, New York, 1944 [estimated $4,000 to $6,000]; group lots of mid-century cocktail advertisements from a Dining Guide series by Think America Institute; psychedelic music posters; and Paul Rand’s famous poster for IBM, converting their logo into an image of a eye, a bumble bee and a stylized letter M, 1982 [estimated $3,000 to $4,000].


Swann Galleries achieves a high percentage of sold lots – suggesting that their estimates tend to be low enough to let the market determine the outcome.  While the past is not prologue experience is useful and suggests an appealing, competitive event – one well worth a closer look.

Here are links to the catalogues both on AE and Swann Galleries' website.