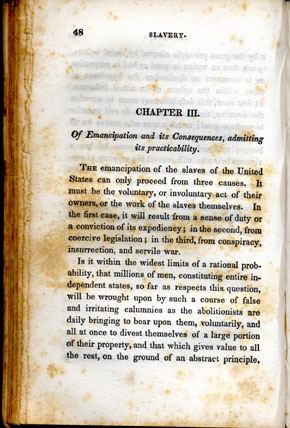 SLAVERY IN THE UNITED STATES
By J. K. Paulding
Published in New York in 1836

Of Emancipation and its Consequences, admitting its practicability

THE emancipation of the slaves of the United States can only proceed from three causes. It must be the voluntary, or involuntary act of their owners, or the work of the slaves themselves. In the first case, it will result from a sense of duty or a conviction of its expediency; in the second, from coercive legislation; in the third, from conspiracy, insurrection, and servile war.

Is it within the widest limits of a rational probability, that millions of men, constituting entire independent states, so far as respects this question, will be wrought upon by such a course of false and irritating calumnies as the abolitionists are daily bringing to bear upon them, voluntarily, and all at once to divest themselves of a large portion of their property, and that which gives value to all the rest, on the ground of an abstract principle, which they never acknowledged? Does the history of mankind present a single instance of such a miracle being worked by such means and such instruments? There is no such example, nor will there ever be until human nature undergoes a radical and complete revolution.

The emancipation of the slaves in the middle states was gradual and progressive; they possessed comparatively few, and their services were not indispensably necessary to domestic offices, or the cultivation of the land. The sacrifice was nothing compared with that demanded of the southern states. It was tacitly assented to, simply because it was not thought worth while to organize an opposition. Few possessed slaves; and these few were overawed by the many. By the former it was submitted to, rather than approved.

It is believed that slavery has been abolished in one, perhaps more, of the states of South America. But this was a revolutionary act. A very large portion of the owners of slaves were of the class which opposed the establishment of independence, whose persons were exiled and outlawed, whose lives forfeited, and whose property was confiscated. The sacrifice was demanded of the enemies of the state, of proscribed exiles, not fellow-citizens and brothers. It was an act of policy or vengeance rather than of humanity.

The late conduct of the British authorities in relation to the slaves of the colonies, which is held up by themselves and their followers in this country as an object of imitation, belongs to that species of philanthropy which is exercised solely at the expense of others. The people of England gave away nothing; they merely submitted to a small addition to a debt which will never be paid. The government of England gave nothing but the money of the people, of which it has never been at all chary. Neither Sir Robert Peel, Mr. Buxton, nor, in all probability, a single one of the noble lords and honourable gentlemen who voted for emancipating the slaves of the British colonies, sacrificed a single comfort or luxury at the shrine of philanthropy; and as to Mr. O'Connell, we have not heard that he relinquished a penny of the "tribute of gratitude," amounting to some 20,000 [pounds] sterling a year, paid by his suffering but generous countrymen to keep his patriotism from falling a victim to ministerial seduction, as that of so many Irish "liberators" has done before him. It has been hinted to us by persons well acquainted with the state of parties in England, that the members of parliament constituting what is called the "evangelicals" hold the balance of power between the "reformers" and "conservatives," and hence probably arises the zeal of the liberator in behalf of the slaves of the United States, who are the favourite, if not exclusive objects of evangelical philanthropy. It is also whispered that the piety as well as humanity of more than one of the most stanch ministerial advocates of universal emancipation, is somewhat political. In such a contest, the great struggle generally is which party shall make the most noise, and all experience demonstrates that the victory is nine times in ten achieved by that which is least sincere.

Be this as it may, on pretence of establishing the rights of one colour, the government of England infringed grossly upon the established rights of another, and committed a robbery under cover of humanity. It outraged its own laws and constitution by an invasion of property guarantied by both, and attempted to cheat the world of its admiration, by an unwarrantable exercise of power over those who were unable to resist. To cover its injustice, it only robbed them of two thirds of their property, and paid for the remainder according to its own estimate, without consulting those whom it plundered under the benignest auspices of philanthropy. The act has no affinity with benevolence, because it is founded in gross injustice, and is equally devoid of disinterestedness as magnanimity, since it was performed at the expense of the colonies, in fact, and was a triumph over weakness. It is still, however, liable to the reproaches of the abolitionists, for it falls far short of their own avowed principles. It was not instantaneous, but prospective emancipation; nor did it apparently contemplate amalgamation, as one of its direct and immediate consequences.