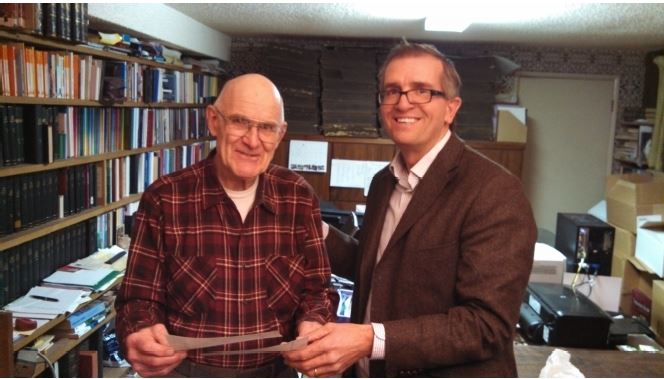 Michael Vinson Americana has acquired the core of what Peter Crawley, author of Descriptive Bibliography of the Mormon Church, called “the finest and most important Mormon collection in private hands.” Material related to the founding and early days of the Church of Jesus Christ of Latter Day Saints (commonly known as the Mormon Church) is highly collectible. The first edition of the Book of Mormon is a prized and highly valuable book (prices often reaching into six figures), despite not being particularly rare, having been printed in a run of 5,000 copies.

The church was founded in the 1820s by its prophet, Joseph Smith, near the town of Palmyra in upstate New York. In 1830, he published the Book of Mormon, based on writings contained on gold tablets to which he said he had been directed by an angel. Soon thereafter, the church began a series of moves, Smith and his followers finding themselves unwelcome wherever they went. The first move was to Kirtland, Ohio, followed by a move farther west to Missouri. There, the Governor virtually invited its citizens to attack the church's followers. Smith next brought the church to Nauvoo, Illinois, but the welcome there was no better. With an internal split complicating matters, Smith was hauled off to jail in nearby Carthage, Illinois, but before a trial for “treason” to the state of Illinois could begin, a mob attacked the jail and killed Smith and his brother Hyrum.


The Mormon Church found itself in disarray, and factions split off at the time. However, a strong leader emerged in Brigham Young, and so began its pioneer era and the church as it is known today. Young led the flock on a long, cross-country journey on foot, where he declared the valley of the Great Salt Lake to be the place they would settle. The area was mostly uninhabited, and Young felt this being an inhospitable location, they would finally be left alone. It wasn't quite that easy, and the church would find itself in battles with the federal government for several decades. However, with the renunciation of the practice of polygamy in 1890, the government in Washington agreed to grant statehood to Utah, and the church finally achieved the acceptance needed to live in peace with its neighbors.


Much of the important material relating to these early, difficult times was collected over most of a lifetime by Barnard Silver, of Salt Lake City. Mr. Silver began his collection as a young man in the 1950s while working for bookseller Fred Rosenstock of Denver. A retired engineer, Silver has long been active in the Mormon Church. He has traveled much of the world and served as a mission president in Africa. While he also collected many foreign editions of the Book of Mormon, the part of his collection sold to Michael Vinson includes the highly collectible early works. While the sales price for the collection was not given, Mr. Vinson described it as “in the high six figures.” Silver plans to invest the proceeds in a venture known as Life Energy Foods.


These are a few of the items found in this collection, some so rare that you may not see another copy come to market for a very long time.


Brief History of the Church of Christ of Latter Day Saints, by John Corrill, published in St. Louis in 1839. Corrill joined the church in Kirtland in 1831, but spent most of the coming years in Missouri. He was elected to the state legislature primarily by Mormons, and defended them against state action, but in time questioned some church doctrines and split with Joseph Smith. He left the church in 1839, but his account provides much information about the problems the church faced in Kirtland and the difficulties that arose in Missouri.


Facts Relative to the Expulsion of the Mormons or Latter Day Saints from the State of Missouri, under the “Exterminating Order,” by John P. Greene, published in 1839. This order was issued by Missouri's governor in 1838. It claimed, “The Mormons must be treated as enemies, and must be exterminated or driven from the state if necessary for the public peace - their outrages are beyond all description.” While few Mormons were actually “exterminated” by the order, most were driven across the border to Illinois. Greene was an early convert to the Mormon Church whose wife was from the same family as Brigham Young. His book was aimed at bringing attention to the injustices done to Mormons, primarily targeted to non-Mormons who might not approve of the faith but believed in freedom and fairness towards others.


General Smith’s Views of the Powers and Policies of the Government of the United States, printed in Nauvoo in 1844. This rare pamphlet came about after Joseph Smith unsuccessfully sought protection for his followers from the federal government. He had hoped other political leaders would act to protect them, but after being repeatedly rejected, he decided to run for President himself. While a primary element of his campaign was a call for strong federal action to protect persecuted minorities, he developed an entire platform for government, much not related to the Mormon faith in particular. Among his proposals was for an end to slavery by 1850, with compensation to slaveholders paid from the sale of western lands. His presidential campaign came to an end when Joseph Smith was murdered.


An authentic account of the massacre of Joseph Smith, the Mormon prophet, and Hyrum Smith, his brother, a less than objective account by Illinois lawyer and newspaperman George T.M. Davis. Davis also left upstate New York in the early 1830s, heading to southern Illinois, but his emigration was unrelated to the Mormons. They just ended up near each other after the Mormons were forced out of Missouri. Davis' account is claimed to be an objective look at Smith and his faith, but in reality is a virulently anti-Mormon polemic, aimed particularly at Smith, whom he called a fraud and every name in the book. This very rare book was published in 1844, shortly after Smith was killed.


Those interested in learning more about the collection, and obtaining a catalogue, which is expected to be available shortly, can visit the website of Michael Vinson Americana at www.michaelvinson.com.