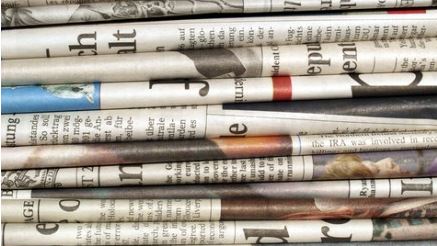 Do you still believe in newspapers? Many have written them off, consigned them to virtual extinction over the next decade or so. However, one person who does still believe in newspapers is America's most successful investor. Warren Buffet has put his money where his mouth is. Well, let's not get too carried away. We'll say he sort of believes and has sort of put his money there. It is a somewhat tepid endorsement, but a welcome one nonetheless. What was once the major if not only way to deliver current news needs all the friends it can get.

Mr. Buffet devoted several pages of his annual letter to shareholders to newspapers. Even he was aware that this might seem an odd investment, beginning the section with the ironic heading, “We Buy Some Newspapers. . . Newspapers?” He goes on to write, “During the past fifteen months, we acquired 28 daily newspapers at a cost of $344 million. This may puzzle you for two reasons. First, I have long told you in these letters and at our annual meetings that the circulation, advertising and profits of the newspaper industry overall are certain to decline. That prediction still holds.”


Circulation, advertising, and most of all, profits falling doesn't sound like the basis for an investment. Not depressed enough? Buffet goes on to write about how “newspapers were the primary source for an incredible variety of news, a fact that made them indispensable to a very high percentage of the population.” International, national and local news, sports and stock quotes all arrived first through your newspaper. Additionally, the advertising was a form of “news,” providing job openings, movie listings, and supermarket specials to readers. That made the local newspaper “indispensable to advertisers.” In communities with just one newspaper, and most cities saw the field condense to one, “its profits were certain to be extraordinary.”


“Now the world has changed,” Mr. Buffet continues. Stock and sports news is out of date before “the presses begin to roll.” The internet has replaced classified advertising, national news flows quickly from the television set. “In one area of interest after another, newspapers have therefore lost their 'primacy.' And, as their audiences have fallen, so has advertising.” Buffet has really made a strong case for newspapers. Why on earth would anyone invest $344 million in such a dying business?


Here is Buffet's answer: “Newspapers continue to reign supreme, however, in the delivery of local news. If you want to know what’s going on in your town – whether the news is about the mayor or taxes or high school football – there is no substitute for a local newspaper that is doing its job... Wherever there is a pervasive sense of community, a paper that serves the special informational needs of that community will remain indispensable to a significant portion of its residents.”


Still, Mr. Buffet acknowledges that local newspapers face difficulties and uncertainties. They need an internet presence, and have traditionally offered their online content for free. “How could this lead to anything other than a sharp and steady drop in sales of the printed product?” he asks. He notes that some newspapers have begun charging for web content, and said these have seen their circulation hold up better than most. Charging, however, is only a relatively recent phenomenon and he remains uncertain as to whether it will resolve the issue of subscribers moving from a paid newspaper to a free website. Unstated is the issue that charging for online content may be difficult because people are used to web content being free, and TV stations and others, used to providing free content, compete online for local news. “Whatever works best – and the answer is not yet clear – will be copied widely,” he adds uncertainly.


Buffet, and his company, Berkshire Hathaway, have mostly limited themselves to smaller market daily newspapers. His largest are in Omaha and Buffalo, but he has owned them for a long time. Were it not for his own beginnings in the newspaper business and a personal fondness, it is questionable whether he would be invested at all. When he purchased a group of newspapers a year ago, he deliberately left out the largest group in the chain, the Tampa daily. The risk appears lower when staying out of the large cities.


And then there is the point about that $344 million invested. To you and I, that sounds like a lot of money. For Mr. Buffet, who is personally worth over $50 billion, it is not. Berkshire Hathaway maintains a market capitalization of over $250 billion. To this company, its investment in newspapers is barely more than one-tenth of one percent of its net worth. Recently, the company announced a $23.6 billion offer to purchase H.J. Heinz Co. That's $23 billion for ketchup and pickles versus $343 million for newspapers. Mr. Buffet may be toying with a business he loves more than making a serious investment. The space in his letter devoted to newspapers far outweighs the size of his investment. Nonetheless, we will take anything positive about print media these days, especially when it comes from a man with such a sterling reputation.