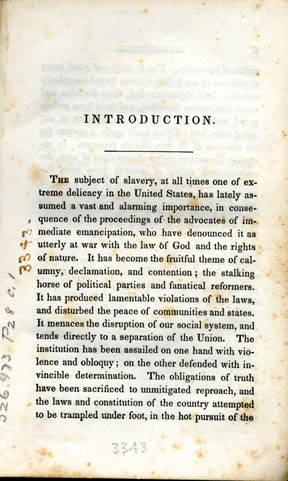 SLAVERY IN THE UNITED STATES
By J. K. Paulding
Published in New York in 1836
INTRODUCTION.
The subject of slavery, at all times one of extreme delicacy in the United States has lately assumed a vast and alarming importance, in consequence of the proceedings of the advocates of im­mediate emancipation, who have denounced it as utterly at war with the law of God and the rights of nature. It has become the fruitful theme of cal­umny, declamation, and contention; the stalking horse of political parties and fanatical reformers. It has produced lamentable violations of the laws, and disturbed the peace of communities and states. It menaces the disruption of our social system, and tends directly to a separation of the Union. The institution has been assailed on one hand with vio­lence and obloquy; on the other defended with in­vincible determination. The obligations of truth have been sacrificed to unmitigated reproach, and the laws and constitution of the country attempted to be trampled under foot, in the hot pursuit of the rights of humanity. The feelings and good name of millions of our fellow-citizens have been grossly assailed, their rights invaded, their firesides and social institutions disturbed, and their lives endan­gered without any regard to the dictates of our moral code, and religion itself made a pretext for the violation of its own benign precepts. In as­serting the natural rights of one class of men, the constitutional rights of another have been de­nounced as violations of the law of God; and, as if it were impossible to be sincere without becom­ing mad, a ferocious, unrelenting, unbrotherly war­fare has been, still is, waging against a large por­tion of the good citizens of the United States, which, if continued, must inevitably separate this prosperous and happy Union into discordant and conflicting elements, that, instead of co-operating in the one great end of human happiness, will be pro­ductive only of contention and ruin.

In this state of things it is thought that a calm, dispassionate consideration of the subject, on the broad general ground of its influence on the happi­ness of all parties concerned, might not be without its uses at the present moment. The question is pregnant with consequences of deeper interest than any that can occupy the attention of a citizen of the United States, for it involves the peace and in­tegrity of the Union, the condition of millions living, millions yet unborn. It is a question concerning rights and duties of the greatest magnitude, the decision of which must vitally affect the present age, as well as long ages to come. In short, it is a case in which nations are called to the bar, and the two great races of mankind are parties to the issue.

To enter on such a subject with reference to present political contests, or with party views, would disgrace any man, high or low. The suc­cess of any party, however weighty might be its consequences; the triumph of any system of policy however salutary; the elevation of one man or the depression of another—all these are as nothing compared with the final disposition which may be made of this agitating question. It is to decide whether THE UNION SHALL LAST ANY LONGER; that union which all good citizens believe to be the great palladium of their present happiness, and that of their posterity. To this party the writer professes allegiance, and to no other. His great principle, and one that it will be his endeavour to sustain in the following work, is, That no beneficial consequences to any class of mankind, or to the whole universe, can counterbalance the evils that will re­sult to the people of the United States from the dis­solution of the Union, and that, therefore, no project ought ever to be tolerated by them which places it in jeopardy. Whether this principle accords with the nice metaphysical subtilties or abstract dogmas of fanaticism, he neither knows nor cares.

Hitherto, almost all that has appeared on the subject has been on one side. The horrors of sla­very have been depicted in such glowing colours as to blind us to the consequences that may, and assuredly will result from attempting to get rid of it in the summary manner demanded by the advo­cates of immediate abolition, who, one might al­most be tempted to believe, consider it the only evil existing in the world. Regard to the honour of our country; justice to a great body of as upright, honourable, and humane citizens as any nation can boast; respect to the laws of the land, and rev­erence for the constitution, seem to demand that the reverse of the picture should be seen; that the mischiefs to be remedied, the cost of the remedy, and the good to be gained by its application, should be calmly considered, in order that all may, if they please, see for themselves and decide for them­selves, whether, in attempting to get rid of one evil, we may not inflict others of far greater magnitude; whether, in short, by applying rash and unskilful remedies, we may not kill the patient.

It will be perceived, in the course of the follow­ing discussion, that the writer does not consider slavery, as it exists in the United States, an evil of such surpassing enormity as to demand the sacri­fice of the harmony and consequent union of the states, followed by civil contention and servile war, to its removal. If the question were now for the first time to be decided, whether it should be per­mitted to ingraft itself on the institutions of the country, he would assuredly oppose it with a zeal at least equal to that with which he is about to combat the unlawful interference of the abolition­ists. But inasmuch as it is now deeply, rooted in our land, and inseparably intertwined with the in­terests, the habits, the domestic policy, and social relations of a large portion of the people of this Union; inasmuch as it is identified with the con­stitutional rights, and the value of the property of millions of free citizens who will not be persuaded, and cannot be controlled; and, above all, inasmuch as the treatment it may receive must and will deeply affect their peace, safety, and happiness, he is for leaving it to the humanity and discretion of those whom alone it concerns. If it be an evil, let those who cherish bear it. It is their business, not ours, since no duty renders it obligatory on us to go crusading about the world redressing wrongs, real or imaginary, which we had no hand in inflicting. If it reflects dishonour, none of it can fall to our share, since the institution of slavery is guarded by constitutional barriers which can­not be overleaped or broken down, and we have done our part by abolishing it wherever it was within our jurisdiction. If it be a crime to have inherited the property of slaves; if it be a crime to decline divesting themselves of it in a manner which all rational reflecting men believe will be equally pernicious to the master and the slave; if it be a crime to resent, resist, or counteract by every means in their power, any interference with a subject involving all that is dear to men, then let them meet the consequences; but let not us, their kindred, neighbours, and countrymen, become in­struments to scatter the firebrands of fanaticism among them, and lend a helping hand to insurrec­tion and massacre.

Let us not forget that in our furious zeal to give freedom to the blacks, we are laying the axe to the root of the fairest plant of freedom that adorns the New or the Old World; that in our ardour to bring about a questionable good, we are provoking vast and alarming evils; and that there is no precept of religion or morality more inflexible in its ap­plication than that which forbids doing evil that good may ensue. Where the evil is immediate and morally certain, on every ground of reason and experience, and the good remote, contingent, and hypothetical, it is the part of a wise and good man to shrink from thus arrogating to himself the attributes of Omniscience, and pretending to look into futurity. When mankind are gifted with a prophetic inspiration directly derived from Heaven; or when they acquire the prerogative of planning and controlling the economy of the universe, then, and not till then, should they dare to do evil in the presumptuous anticipation that the miseries they may inflict on the living, will be repaid by the hap­piness of those yet unborn.