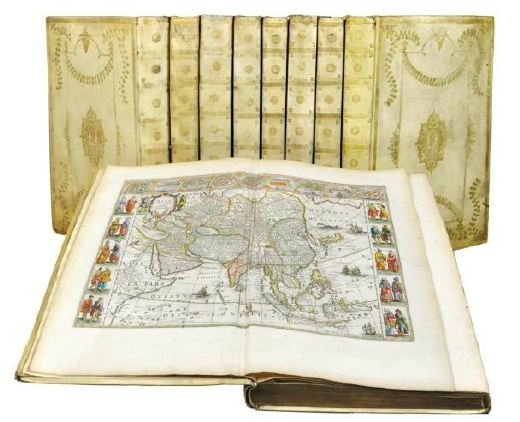 Shapero Rare Books of London has revealed a few of the items they will be bringing to the annual TEFAF show in the Netherlands this year. TEFAF is an arts and antiques show, but Shapero Rare Books has found a welcome place there for over 20 years. It is an example of a bookseller expanding its market beyond the confines of the regular book trade. Such expansion was likely a bonus for a bookseller 20 years ago. Today, many may find it a necessity to move beyond the walls of the traditional book market if they are to thrive.

TEFAF describes itself as an “art fair, setting the standard for excellence in the art market.” It says it is presenting items from 260 of the “world's leading galleries.” It isn't until the end of a statement about offering various types of art along with jewelry and design that it finally mentions “works on paper.” This is clearly not a setting in which to display text. So, what would a bookseller offer in a place like this? Well, let's take a look at some of the items Shapero has announced they will display at the show.


Joannes Blaeu's world atlas published 1662-65. It is modestly known as “the greatest and finest atlas ever published.” The Dutch were the finest mapmakers of the 16th-17th centuries, and this was at their high point. It contains 600 hand-colored maps in nine volumes. This may not be a piece you hang on the wall like a painting, but is is certainly a very visual object.


A photo album of Tsarist palaces. This contains over 180 photographic views plus two watercolors by the noted Russian artists of the time, Sverchkov and Frentz. The photographs are from the 1860s, and the spectacular binding indicates this was once owned by someone of significance.


A manuscript album in a presentation binding containing 95 watercolor drawings of Russian artillery. It is likely to have been presented to Emperor Paul I and later belonged to Tsar Alexander II.


While what Shapero is offering is not artworks in the traditional sense of hanging a painting on the wall, they are all very visual objects. They are art as much as they are books, in some cases maybe more so. There is certainly a market for items that are primarily text, but the market for visual objects today is even broader. Shapero is tapping into this market by attending the TEFAF fair.


Along with Shapero Rare Books, several other booksellers will be attending this year's edition of the exhibition, including Daniel Crouch Rare Books of London and the Antiquariatt Forum of the Netherlands. The fair will take place in Maastricht, the Netherlands, from March 15-24. There will be an incredible selection of works of art on display, with some of them coming in book form. Bibliophiles are welcome.