A Map, A Mystery 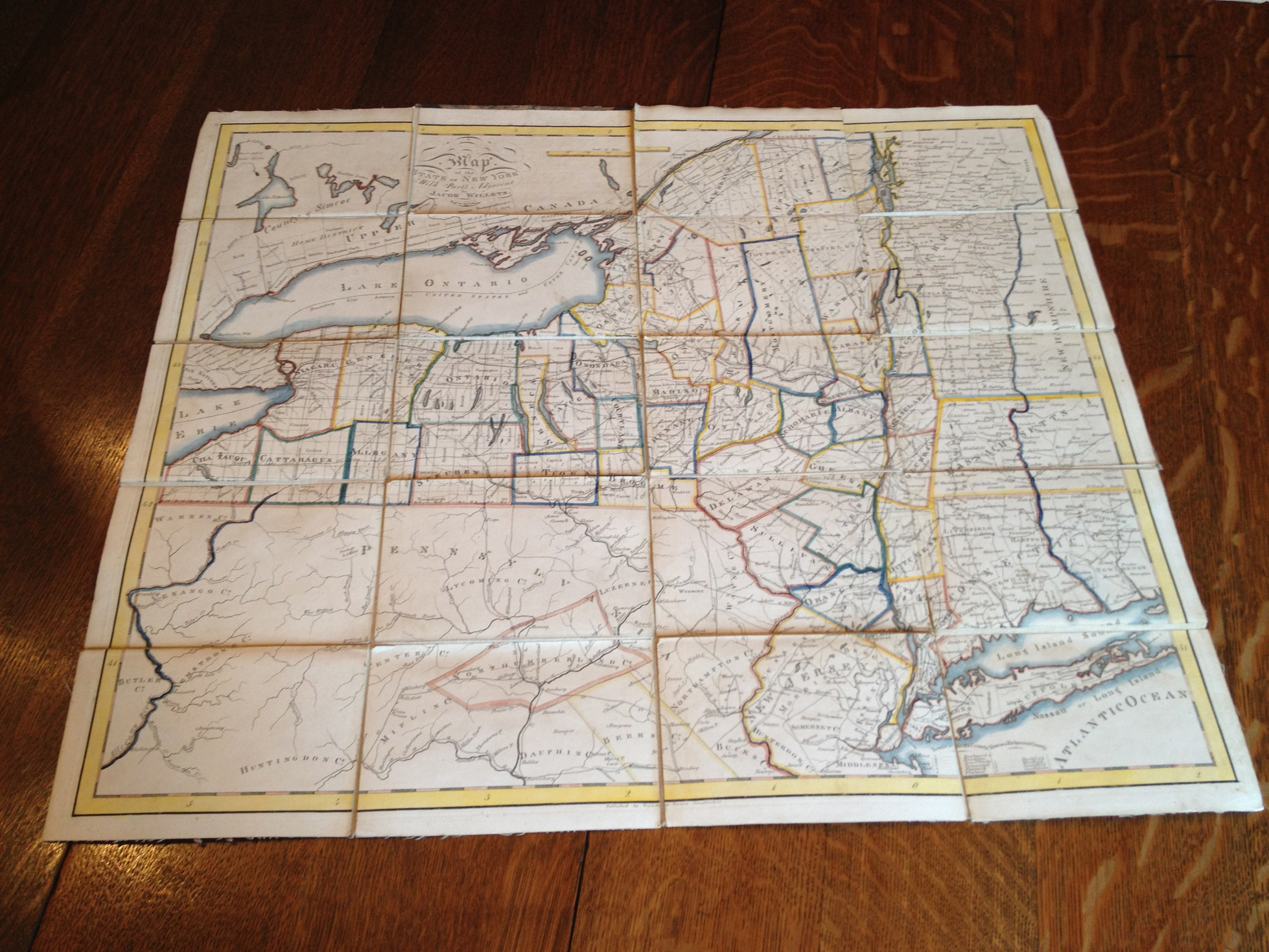 Map of the State of New York by Jacob Willets

Map of the State of New York by Jacob Willets, engraved by James D. Stout

Paraclete Potter was a prolific Poughkeepsie printer but he was not artistic.  His printings of the Poughkeepsie Journal between 1804 and 1837 are priceless for the unvarnished story of life they portray.  He also published books, an indeterminate number but probably altogether about 50.  Few if any are anything more than workmanlike.  He labored to be effective but labored under the constraints of poor equipment, poor paper, poor bindings and a poor community.  Money would have been scarce.  Nevertheless he left an impressive mark.


The weekly Poughkeepsie Journal, founded in 1796 with which he became associated in 1804 and its outright publisher for 30 years beginning in 1806, would week by week tell the story of a river-front community on the Hudson emerging as the Hudson River itself emerged, for its limited engagement, as the Broadway of America.  This was not to last but for most of the Hudson’s ascendant period [1800 to 1840] Paraclete Potter was recording its story.  He would, like his city, fail financially in the mid-1830s, they recover and he relocate to Wisconsin in 1837 but leave behind a stellar account of daily life.  His bones are probably sitting beneath a forgotten stone but his spirit is alive in the many examples of his printing that survive.


The Journal, his principal contribution, was not alone in capturing the history of Poughkeepsie and Dutchess County in this era.  No less than 7 other newspapers vied for commercial viability in Poughkeepsie between 1801 and 1840 and they are all useful for understanding life in this period.  The Journal nevertheless was unique, the only paper to survive the entire period.   Not satisfied to publish only his newspaper he would also publish books, most of them reprints in canted forms and awkward bindings.  What he hadn’t printed/published prior to 1815, as far as I can find, are large maps.

In that year he published a beautiful example, his Map of the State of New York by Jacob Willets and engraved by James D. Stout.  It is to my inexperienced eye a substantial achievement, an exceptional printing, and particularly unusual given it is well beyond anything he had done before or would do later.  He would, four years hence publish a series of maps for use in schools that are consistent with his printing and binding capabilities as expressed in the other things he published.  He was, in short, a C printer, his 1815 map an A work.


So the question comes to mind.  Did he really publish it?   Lauren Hewes, Andrew W. Mellon Curator of Graphic Arts at the American Antiquarian Society, suggested the engraver or the map’s author may have seen to the printing and Mr. Potter simply born the expense and thereby gained the publisher’s credit.


The Potter family were high achievers.  Paraclete’s father twice served in the New York State Assembly and his two brothers, Alonzo and Horatio, become Episcopal Bishops.  Perhaps the underwriting of a beautiful map, in such a family, was simply the expected thing to do.

Whatever it is it is a remarkable survival.


And I am left to wonder.  Is there more to the back-story?  If you have some ideas please contact me.