Slavery in the United States<br>Chapter 1 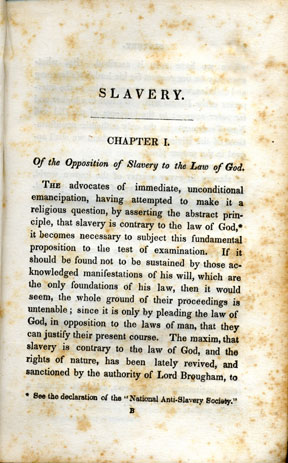 SLAVERY IN THE UNITED STATES
By J. K. Paulding
Published in New York in 1836
CHAPTER I.
Of the Opposition of Slavery to the Law of God
5,296 words

THE advocates of immediate, unconditional emancipation, having attempted to make it a religious question, by asserting the abstract principle, that slavery is contrary to the law of God,* (See the declaration of the “National Anti-Slavery Society.”) it becomes necessary to subject this fundamental proposition to the test of examination. If it should be found not to be sustained by those acknowledged manifestations of his will, which are the only foundations of his law, then it would seem, the whole ground of their proceedings is untenable; since it is only by pleading the law of God, in opposition to the laws of man, that they can justify their present course. The maxim, that slavery is contrary to the law of God, and the rights of nature, has been lately revived, and sanctioned by the authority of Lord Brougham, to whom we have seen it ascribed. But whatever may be our respect for his lordship's learning and abilities, we cannot recognize him as the interpreter of the Divine will. We look to a higher and far purer source: to the precepts of the Old and New Testaments, as the only authentic manifestations of the Divine law, and to them we shall appeal in the proper place.

It is presumed that none will deny the existence of slavery in every quarter of the known world, at the period when the law of God was promulgated from the judgment seat on Mount Sinai. That it was hereditary bondage will appear from the passages that will be presently cited. It is frequently alluded to; frequently recognized as a part of the social system of the nation to which the Scriptures were addressed, and never denounced as a crime or a curse by name or by description.

A reference to the Old Testament will show that the abolitionists can derive from it no authority to sustain their position that slavery is contrary to the law of God. The only text they have been able to bring to bear directly upon the subject, is that which denounces the penalty of death to the "man-stealer;" while, on the contrary, slavery is made the subject of express regulation in the social institutions of the Jews, and this without a single expression of disapprobation on the part of the divine Lawgiver. It is evident, therefore, that the denunciation of death to the man-stealer is not applicable to those who hold slaves by capture in war, by purchase, or by inheritance. Its object was unquestionably the same with that of the law of the southern states, which inflicts a heavy punishment on those who steal or entice away slaves from their rightful owners. It was a law for the security of this species of property.

There is, however, one other passage in the Old Testament which the abolitionists have cited in support of their position that slavery is contrary to the law of God. It is found in the fifty-eighth chapter of Isaiah, and is as follows :— "Is not this the test that I have chosen to let the oppressed go free, and that ye break every yoke?"

One of the great sources of those differences in the interpretation of the Scriptures, which have confounded mankind, and produced endless controversies of the sword and the pen, is the custom of explaining isolated texts, without any attention to their connection with what precedes, or what follows, and without the least regard to the circumstances which gave rise to the precept.

The book of Isaiah is a prophetic vision,* (Isaiah is considered by commentators as the most difficult of all the prophets to comprehend.) having a single reference to the abuses, corruptions, and oppressions which had crept into Israel, most especially its idolatries; and to the coming of Christ. It is thus ushered in :—

"The dream of Isaiah the son of Amoz, which he saw concerning Judah and Jerusalem, in the days of Uzziah, Jotham, and Hezekiah, kings of Israel." It begins by detailing the backslidings of the people.
"Thy princes are rebellious, and companions of thieves. Every one loveth gifts, and followeth after rewards: they judge not the fatherless, nor doth the cause of the widow come unto them.
" The land is full of idols; they worship the work of their own hands, and that which their own fingers have made."

Such are the principal evils of which he complains, and which he predicts will be cured by the mission of Christ, which all the authorities we have seen agree in saying was exclusively devoted to the reformation of ecclesiastical abuses and the corruptions of the church. The government of the Jews was in effect a hierarchy, and the abuses he enumerated may be traced in a great degree to this source. The captions of the different chapters run as follows :—