Detailed Report Looks at Library Usage in the Digital Age 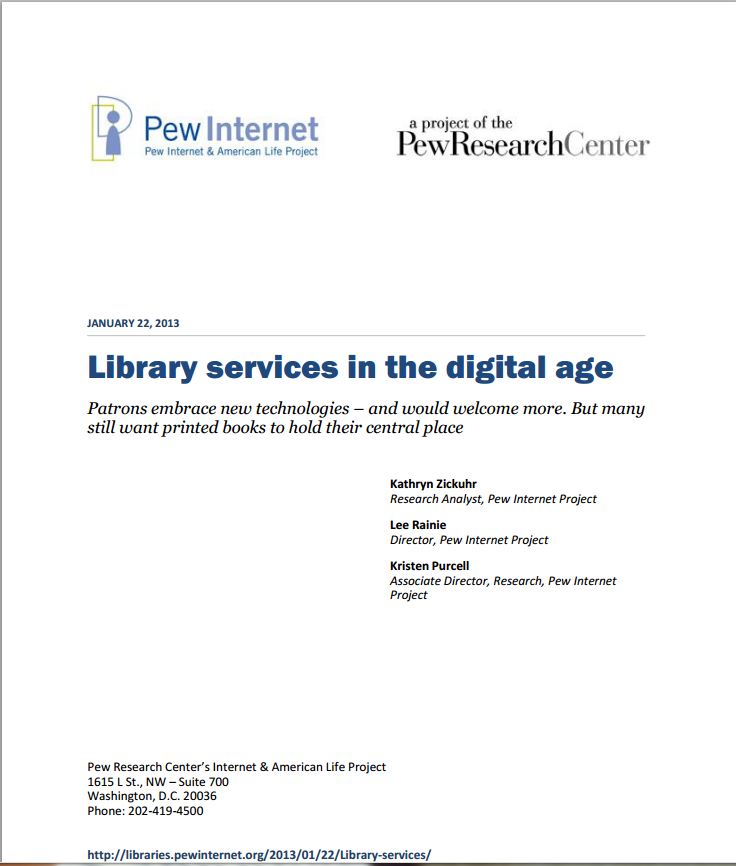 The Pew Research Center has released a report on Library Services in the Digital Age. What we see is a popular, even beloved institution grappling with a world that is changing at speeds unimaginable in the past. Libraries are forced to deal with people who want traditional services yet new ones too, while they have to provide all of this within tight, often declining budgets, and limited space. What we want and what we want to pay for aren't always the same.

We find that traditional services, borrowing books and access to reference librarians, are considered “very important” by 80% of the American public age 16 and over. The more recent services of free access to computers and the internet scored almost as high at 77%. However, a host of new services would also be welcome, including online help from librarians, places to try out new technology, community based kiosks similar to “Redbox” where people can check out books, music and movies, and apps based access to library materials. Large majorities indicated they would be either very likely or somewhat likely to use these services. When library staff were asked about new offerings desired by their patrons, they cited classes on borrowing electronic books, classes on how to use hand-held reading devices, and online research assistance from librarians.


Asked about public priorities for libraries, 85% said libraries “definitely” should coordinate more closely with schools, 82% said they should offer more literacy programs for young children, 59% said they should have more comfortable spaces for reading, working and relaxing (sleeping in the library?), and 53% favored a greater selection of e-books. This question was not asked, but a majority probably would have voted for free milk and cookies if the option were offered. Librarians have their work cut out for them.


The 53% favoring a greater selection of e-books was interesting. A Pew survey the previous month indicated only 5% of the public borrows e-books from libraries. This gap between 5% and 53% could reflect libraries not offering the desired titles, though it also may reflect inertia and force of habit. People don't seem to quite be in the hang of borrowing electronic books from their library yet.


While library users want more technology and other services provided, they were not so keen on removing books to make more space for them. The margin was 36%-20% against moving books and stacks out of public locations to free up space for other activities, with most others saying “maybe.”


While all of these wants may make for a challenging environment for librarians, the good news is that libraries are still appreciated, even by people who rarely if ever visit them. An astounding 91% of Americans say libraries are important to their communities, and 76% say they are important for themselves or their families. However, only 53% actually visited a library in the last year. Only 22% said they knew all or most of the services libraries now offer.


Traditional activities topped the list of what recent library users did. Borrowing print books and browsing the shelves for books or media topped the list at 73%. Next, 54% said they researched topics of interest, 50% came to seek help from a librarian, 49% to read, study or watch/listen to media, 46% to use a research database.


Interestingly, the number of recent library users who said their use of the library increased vs. decreased in the past five years was a close split, 26% saying it increased, 22% that it decreased. These numbers may tilt a bit favorably to library usage since it wouldn't include former “recent users” who dropped out of that category in the past year. Of those whose usage increased, the largest reason was bringing children or grandchildren to the library, cited by 26%. To do research was 14%, to borrow books 12%, being a student 10%. Among those whose use declined, there was a major concentration of 40% who said they can do research or get books online outside of the library. That is an issue librarians need to consider. One of the major ways libraries have reinvented themselves as interest in traditional print books for research or reading has declined has been to provide free access to the internet. As such access has become available to an increasing percent of the population from home, the need to obtain such access at a library can be expected to decline. Another reinvention may be in order. A second major factor for decreasing use is the other side of the major reasons for increasing use – 16% cite that their children have grown or they are no longer a student.


Interest in new services is stronger among minorities than others. Various suggested new services generally elicited about double the interest among blacks and Hispanics as among whites. Current usage is similar between blacks and whites though Hispanics use the library at a lower rate. Women are also more likely to visit a library than men.


Details on this interesting study may be found at the following link: libraries.pewinternet.org/2013/01/22/library-services.