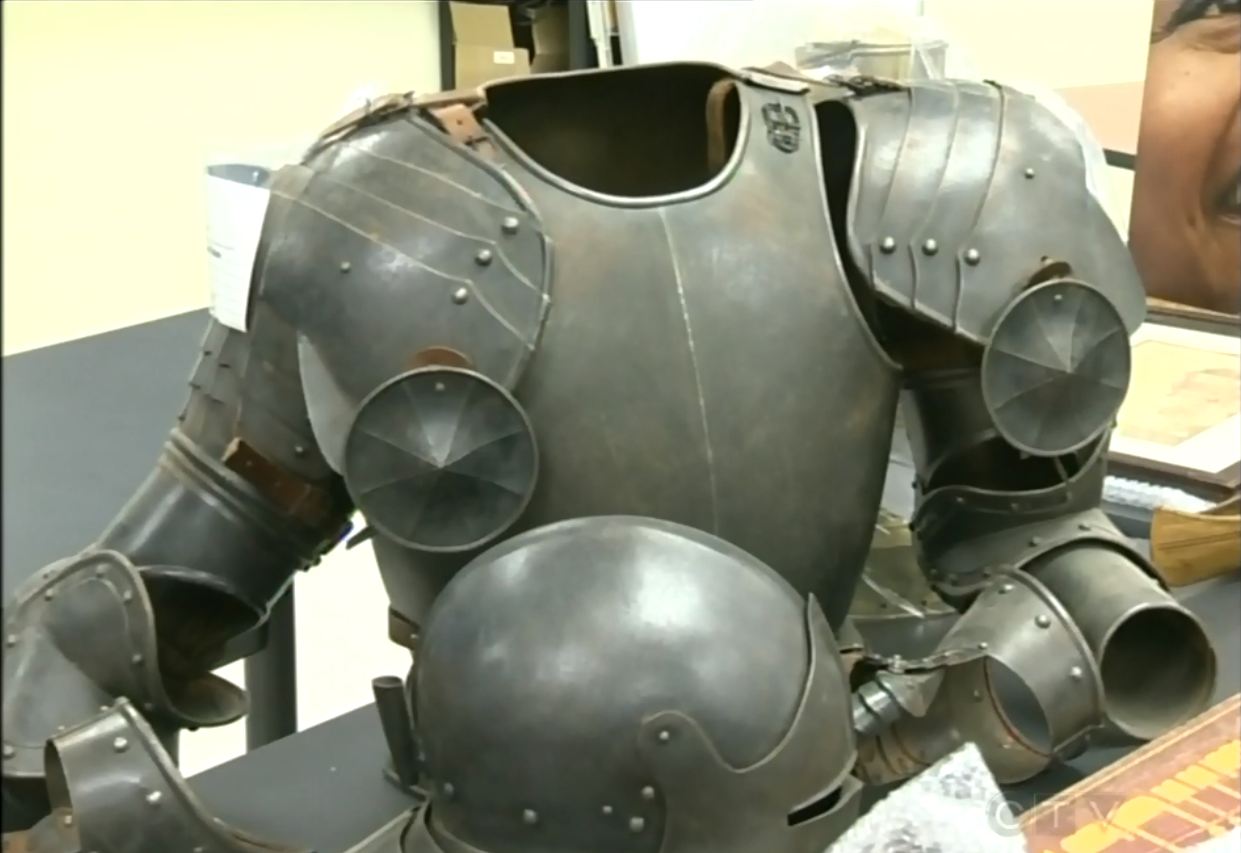 This suit of armor was among the 1,000+ artifacts recovered.

The Royal Canadian Mounted Police are looking for help in locating the owners of over 1,000 stolen artifacts, ranging from books, documents, manuscripts, drawings, photographs, and paintings, to more esoteric items, such as a suit of armor, a World War I era gas mask, a desktop model canoe, and a ship's door. Tools, tins, glassware, and “you name it,” according to the officer seeking the victims, are other items they have recovered. They were all discovered in the home of a man from Fall River, near Halifax, Nova Scotia. Fifty-one year old John Mark Tillmann was already very well-known to police when they searched his home. They have been interacting with him for the past 30 years, interactions that appear to have had little effect on his antisocial behavior.

Halifax police had seized a letter from Tillmann written by General James Wolfe in a traffic stop during July of 2012. It took some time, but they traced the letter back to the collection of the Dalhousie University Archives. As a result, a search warrant was issued and a search made on January 18. It was then that the enormous trove of missing items was discovered.


Most of the material is believed to have come from universities, museums, and private collections around Nova Scotia and Atlantic Canada. While some of the items had been reported as stolen, most had not. That is why police are seeking help in identifying the owners of many of these artifacts. The timing of the thefts is uncertain as well, though it is believed to have occurred over many years. The police have already located a dozen institutions with missing items found in this collection. Others with missing artifacts that may be among this group are urged to contact the RCMP with a description, and if possible, a photograph of those items. The contact to relay this information is Darryl Morgan, email darryl.morgan@rcmp-grc.gc.ca


Among the notable items recovered was the previously mentioned letter from General James Wolfe, written shortly before the siege of Louisbourg in 1758. Wolfe commanded British troops in this critical battle for the French fort at the mouth of the St. Lawrence River during the French and Indian War. The victory was essential to the British as it freed them to attack the French in Canada by way of the St. Lawrence. The following year, Wolfe would again be leading an attack that drove the French from Quebec, though he lost his life in the process.


From the field of print, a copy of one of the most collectible of books around was recovered – a first edition of On the Origin of Species by Charles Darwin. A copy of John Elliott Woodford's painting of Province House, stolen from Province House in 1999, was also found. The possessor seems to have been more of a collector than a “businessman” selling off acquired material. How Tillmann came into possession of these goods is as yet unclear. He has not been charged with theft, but with possession of stolen property.


Criminal charges are nothing new for Mr. Tillmann. One wonders if there have been any charges in Nova Scotia the past few years for which he was not a suspect. He has some 15+ convictions on his record dating back to 1983, and countless other accusations. He spent two years in prison following a 2009 conviction for assaulting, threatening and extorting a former girlfriend. According to her testimony reported in the Halifax Chronicle Herald at the time, “Mr. Tillmann threatened to smash her face into powder and injure her toes.” She also reported he threatened “I’ll come after you asymmetrically.” I'm not sure what that means, perhaps something related to the bizarre face and toes threat.


Mr. Tillmann was later charged with attempted murder, assault, and failure to provide adequate care for his elderly mother. Yet another charge stated that he threatened violence on his sister if she attempted to contact their mother. These charges were dropped after his mother died (of natural causes) at age 82. More recently, he did receive a six-month conditional sentence for issuing a forged check to a body shop. He was ordered to provide community service, and undoubtedly the community will be delighted to receive his help. The conditional sentence was almost withdrawn after Tillmann was charged with stealing water jugs from a store, but the prosecutor relented after the store declined to press charges.


The gentleman currently is scheduled for trial on a series of other charges issued late last year. He was facing 14 claims relating to contacts with another ex-girlfriend, including assaults and threats, even one that he threatened to kill her dog. It is no wonder he has trouble maintaining relationships. Tillmann was out on bond from these charges at the time of his most recent arrest. This time he has not received bond. He will return to court for a bail hearing on February 27.


Commenting on the case, Sgt. Colin MacLean of the Halifax District of the Royal Canadian Mounted Police said, “This is one of the most unique files that I have investigated in my career. The items that we have seized are vast in number and will take investigators in many different paths. One of the biggest challenges ahead will be determining ownership.” If you can help, you are urged to contact the police.


A few of the recovered items can be seen on the following web page of the RCMP: www.rcmp-grc.gc.ca/ns/features-envedette/PublicAssistance-L'aideDuPublic-eng.htm.


Our thanks to the folks at Gallery 18 in New London, Prince Edward Island, for providing a copy of the RCMP's notice seeking help from those who may be able to identify any of these items.