A New Catalogue/Bibliography of the Christmas Cards of Tasha Tudor 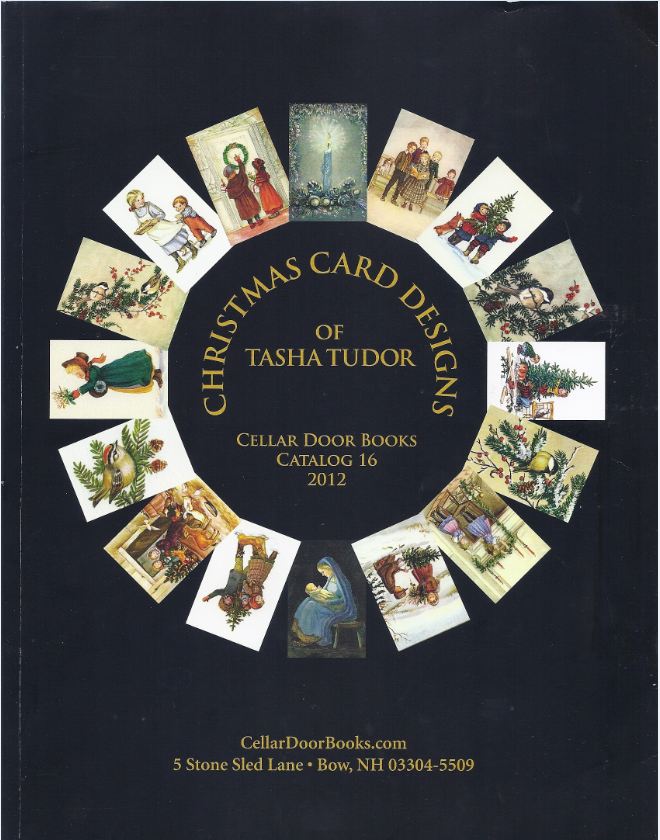 Tasha Tudor is one of a select group of twentieth century children's authors and illustrators, like Dr. Seuss and Maurice Sendak, to achieve widespread familiarity with generations of young people. Her work was not filled with the fanciful creations of those writer/illustrators, but was a throwback to a simpler time. She lived the life she depicted, a 19th century world unspoiled by the technical gadgetry and the fast pace of today's life. A traditional and old-fashioned lifestyle was what she created and how she lived, mostly on New England farms. It must have been a healthy lifestyle as Ms. Tudor lived to be 92. According to her New York Times obituary, she once told a Virginia newspaperman she planned to go straight back to the 1830s when she died. Daniel Webster must have been waiting to greet her.

Ms. Tudor was born Starling Burgess, but in time changed both names, her first to a nickname provided by her father, her last to her mother's last name. Her mother was a portrait artist. From her, Ms. Tudor learned her trade. She was both an illustrator of others' books, and the writer/illustrator of her own. Combined, she illustrated nearly 100 titles over the course of her long life.


Tasha Tudor married Thomas McCready in 1938 (they divorced in 1961). McCready encouraged her to seek a publisher, which resulted in her first book, Pumpkin Moonshine, published in 1938. She would continue to publish until her final work, Corgiville Christmas, was released in 2003. She died in 2008.


All of this is simply by way of introduction. This article pertains to a catalogue of Ms. Tudor's work, but there are no books in it. Then again, this isn't quite a typical catalogue, which is why it is not reviewed in our catalogue section. We are getting ahead of ourselves. Ms. Tudor was primarily an artist, and she applied her skills to more than books. She illustrated cards, calendars, valentines, and other items. She provided illustrations for various types of greeting cards, but the great majority were Christmas cards. Most likely you have received Christmas cards adorned with her illustrations over the years, even if you didn't know it. They depict traditional Christmas scenes, snow-covered New England hills, wreaths, children, all of those things associated with Christmases long ago. It was an idyllic world to which we would love to return, even if we never really lived in such a place to begin with.


Cellar Door Books, of a place Ms. Tudor would have appreciated – Bow, New Hampshire – has released a catalogue of her cards. It is titled Christmas Card Designs of Tasha Tudor, though it does include a few general interest cards as well. It is a truly wonderful catalogue, a must-have for those who love and collect Ms. Tudor's work. And, while this is officially a catalogue, with much of what is found offered for sale, it really is something more. This is effectively a bibliography of Tasha Tudor's card work. Cellar Door has gone to great lengths to be thorough, providing images wherever possible, even for cards they do not have available, and describing, though leaving the image space blank, where they cannot locate one. In other words, this is even more a guide to the cards of Tasha Tudor than a sales catalogue. It is likely the best such guide and bibliography you will ever find. The prices at which her cards are offered provide an estimate to their values.


This thoroughly illustrated catalogue cum bibliography is available directly from Cellar Door Books. It contains 288 pages, mainly of images. It is available in both soft cover ($44.95) and hard cover ($74.95). If you are a Tasha Tudor collector, especially of her cards, but even if of her books, you will definitely want to have a copy. It is filled with illustrations she drew, many of which you will not likely have an opportunity to see elsewhere. The Christmas Card Designs of Tasha Tudor can be ordered directly from the Cellar Door Books website, or you may contact them by phone. The phone number is 800-818-8419, and the website is found at www.cellardoorbooks.com.