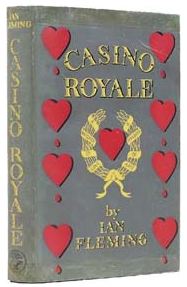 The first of the highly collectible James Bond books.

AbeBooks recently released their list of the top prices paid on their site in 2012. AbeBooks is the largest of the old and used book listing sites, their total sales not revealed, but clearly in the many millions annually. Well over 100 million books are listed on the AbeBooks sites around the world.

Most of the books listed on Abe are inexpensive, undoubtedly meant as reading copies. However, the site also offers a rare book room, and over the years, the prices achieved on these collectible works has been steadily moving up. The top priced items are probably at a level no one would have expected when Abe first burst on the scene in the 1990s. While the top priced item was a little below last year's chart topping $51,739, by the time you get to #10, the price was over 50% higher than last year's tenth highest price. That is a sign that the amount of money people are willing to pay through an online listing site is continuing to move up.


What is perhaps most noticeable about this list is that although Abe is a North American site, the list is dominated by European titles. Perhaps Europeans are a bit more willing to buy high-priced books online. Here are the top 10 highest prices paid for books on the AbeBooks website in 2012.


10. Les Ruines de les Plus Beaux Monuments de la Grece, by Julien David LeRoy. This is a 1770 second edition of the French architect and archeologist's book about the ancient ruins and monuments of Greece. $23,530.

5-7. Where the Wild Things Are, a first edition of Maurice Sendak's most popular of his many favorite children's books. $25,000.