Printed Books Still the Most Popular, but E-Books Are Gaining Rapidly 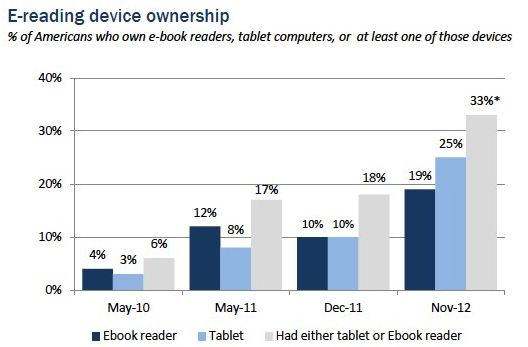 There is good news and bad news for those who believe that traditional print is the best form for reading books. A recent report from Pew Research revealed that print is still the most popular format for book readers, by a rate of almost 3-1. On the other hand, the popularity of electronic books is growing rapidly, while the number of print readers slowly declines. It may well be an inexorable change, but there is still a long road before printed books go the way of the horse and buggy. Perhaps they never will.

According to Pew, as of November 2012, 67% of Americans age 16 and over read a printed book during the previous 12 months. The number who read an e-book during that period was 23%. Printed books won this contest by a landslide.


Not so fast. The trend is not print's friend. At the end of 2011, the number of people who had read a printed book in the previous year was 72%. That's a decline of 5%. The number who read an e-book during that period was 16%. E-book reading increased by 7%, while the one year swing was 12%. At that rate, e-book reading will overtake printed book reading in four years.


What is even more dramatic is the increase in the number of e-book reading devices. These take two forms. First there is the standard e-book reader, designed especially for books. These include the dominant Kindle from Amazon, and the strong runner-up, Barnes & Noble's Nook. The second type is the tablet computer, such as Apple's iPad and Amazon's Kindle Fire. As of May 2010, 6% of the population owned at least one of these types. By the end of 2011, the number had risen to 18%. Over the past year, another 15% of the population picked up one of these readers, so that's 33%, or one-third of the population that now possesses an electronic reading device. With the addition of the smaller iPad mini, and several other manufacturers trying to muscle in on Apple with tablet computers of their own, this number can be expected to continue its sharp growth.


Indeed, it may be the tablet computer, which many people buy for more convenient access to the internet, but which also serves as an e-reader, that pushes the transition faster. Two and one-half years ago, according to Pew, 3% of the population owned a tablet computer. A year ago, the number was 10%. Today it is 25%. People who may have been reluctant to pay the money for a dedicated e-book reader can now read electronic books because their tablet computer serves as an e-book reader too. In fact, the percentage of the population owning a tablet computer now exceeds the percentage owning an e-reader, 25% - 19%.


Libraries are starting to get in the act, but far more slowly. Despite the fact that one can commonly borrow an e-book for free from a local library, and may be able to do so from home without darkening the institution's door, most people buy their electronic books. The percentage of library users who borrowed an e-book last year was just 5%, though that is up from 3% the previous year. The number of borrowers is surprisingly small considering 31% of the population now says it is aware that libraries loan e-books.


Overall, the survey found 75% of Americans age 16 and over read a book last year (or listened to an audio book). That was down slightly from last year's 78%. For women, it was 81%, versus 70% for men. The youngest group read the most, the oldest the least. Readership increased with income and amount of education. City folk read a little more than country folk, but used e-readers a lot more. Book readers read an average of 15 books during the year, but that number was inflated by the heaviest readers. The median, or number at which 50% read more and 50% read fewer, was 6 books during the past year.