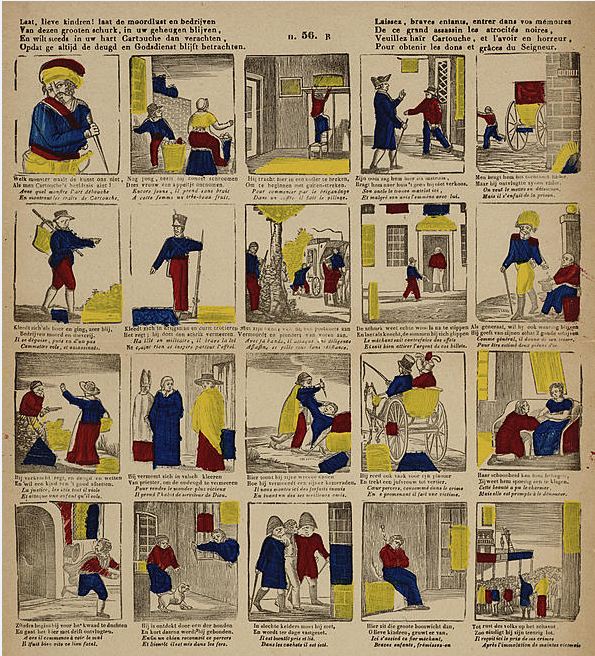 An early (1840) Dutch cartoon on the notorious life of Cartouche.

“Larrons”, robbers and thieves, have always been a vulgar subject, dedicated to the masses. Thus the Histoire Générale des Larrons, by De Calvi (1639), for example, was printed in Rouen – a city known for its low quality and cheaper printings. These books are almost always in bad condition, because they have been read over and over. In the field of books, peddling saw the light as soon as the 16th century. Wealthy people living in the countryside could thus buy books. In the 18th century, though, cheaper books entered the households of farmers where many families would gather in front of the fireplace to hear the only man in the village who could read. “Peddlers sold religious books but also teaching books, school books (...). You could also buy some books about magic like the Fantastic Explanation of Dreams, The Great Albert, the Little Albert, The Mirror of Astrology, The Art of Chiromancy etc.” reads the Larousse encyclopedia.


At the turn of the 19th century, topics evolved and the “Bibliothèque bleue”, or “the Blue Library”, specializing in this type of publication, became very fashionable. These books were cheap (4 sous), because they aimed at conquering this specific audience. The topics are rarely captivating: a lot of humourous works (The Malice of Women, The Misery of Husbands, The Description of Six Forms of Farts etc.), some chivalry novels (The Conquests of Charlemagne, Robert the Devil, etc.) and, of course, crime stories such as the lives of Cartouche or Mandrin - another notorious villain of the 18th century. A peculiar peddling book is even entitled Dialogue between Cartouche and Mandrin... The two robbers meet and quarrel in hell and Proserpine takes the wheels upon which each man suffered death to make herself a cabriolet. “Ever since, Proserpine is riding her cabriolet, as crazily as the French do on the Boulevards”, concludes this enigmatic 11-page text which appears to be a pamphlet against bad drivers. Of course, some noble spirits, mainly clergymen and teachers, rose against this vile literature that was misleading the youth and the series “literature for the youth” was launched as a sane reaction to peddling books, and saved many souls from damnation. But in the middle of the 19th century, serialized novels published in newspapers put an end to this form of literature. It is said, nevertheless, that the last peddlers worked until around 1930.


Peddling books have a fan club, nowadays. In my opinion, most of these works are just hard to digest – or rather untasty. But some masterpieces have surfaced over the years, and the Life of Cartouche... is one of them, if you ask me. For some reason, the adventures of this villain fascinate me. He was no ordinary robber and excellency exists in every field, evil included. I’ve since come across another copy of the Life of Cartouche... it was bound in half-morocco ; a mark of respect, I guess. Cartouche, fond of luxury as he was, would have appreciated. I‘ll stick to my raw copy, though – when I open it up, it smells of the spirit of adventure, the sweat of horses and the powder of gunshots. An ugly book, for an ugly life - that means beauty to me.