The Making of a Cape Cod Library 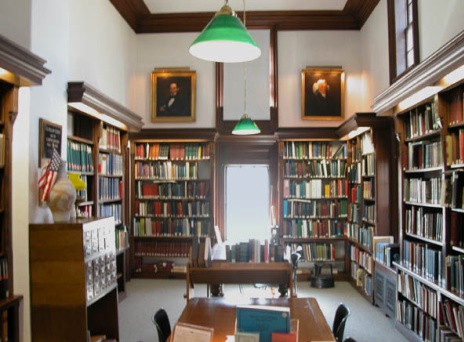 Sturgis is not the largest library on Cape Cod, but it is highly interesting for its size.

Viewing a library for the first time is like having a ticket to the invisible world of the mind of its founder. Sometimes I feel like we should have special permission to do this, since libraries provide an unwitting opening into people, revealing things that might otherwise be hidden from public view.

Even a public library, despite years of acquisitions and de-accessions and the layering of librarians unrelated to each other, each with widely divergent missions and interests, can give great insight into the thinking of its founders. If we accept that we each construct our own reality from the sensory input we receive — and if we accept that this reality is valid — then our own particular mental mix of fact, fantasy and connected knowledge generates a legitimate response to the library’s collection and, in a sense, interacts with the collection itself to create a more tightly-woven reality.

Strange words, a sort of a philological mysticism, but I have to admit a strong affinity with Sturgis Library in the Town of Barnstable on Cape Cod because I’ve had the time to study its earliest acquisitions, some of which I’ve purchased as discards at the library sales that run throughout the year. Sturgis is not the largest library on Cape Cod, but it is nevertheless extraordinarily interesting despite its size, particularly for its special collections in New England genealogy, maritime affairs, and Cape Cod history, as well as a fascinating smattering of nineteenth-century literature, history and philosophy which has survived more or less intact from its inception.

What I’ve found there of particular interest is the combination of its ambiance — it is housed in the oldest library building in the United States, originally built in 1644 for the Reverend John Lothrop — and its ineluctable “intentional nature," the brainchild of Lothrop’s direct descendant, William Sturgis, a risk-taking clipper-ship owner who prospered in the mid-nineteenth century through trading in the Far East and the Pacific Northwest.

Sturgis purchased his family homestead on the Old King’s Highway and then willed it, along with $15,000 (a small fortune in 1863) and his own books, to found a free public library. This was a singular act of personal risk in community investment, even more so given that whatever “profits” to be made would accrue beyond Sturgis’s own lifetime. So for me, the heart of this library is not the main entrance-way or the main desk, but the homestead itself — the original 17th-century building, with its pumpkin-colored wide-board floors and long pine table which was related to the strength and resourcefulness of the library’s founder — the center of many a gathering, as well as Reverend Lothrop’s sermons... a center not just of the mind, but of the spirit. Reverend Lothrop’s Bible is still resident in this room, protected within a glass-covered case.

It is interesting to me that Sturgis did not cause a new building, more appropriate for the library, to be built, as he could readily have done. Instead, this homestead was purchased intentionally for the library. I would like to think that the values and knowledge that Sturgis found through that place, and through his family, were willed, to the community, along with the financial resources to make the library itself happen.