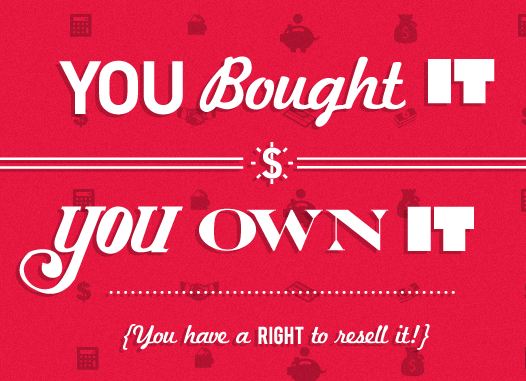 Motto of the Owners' Rights Initiative.

Most of us have probably sold an old book at a yard sale, on eBay, given it to a library, or some such thing. We probably never gave it a second thought. Maybe we need to. Maybe we are criminals, violating copyright law. A case has come before the Supreme Court that could turn some of our assumptions upside down, at least as pertains to books produced overseas. Take that, Gutenberg! You better read Johannes' copyright notice before you sell your copy of his bible.

This issue arose from the brainchild of Supap Kirtsaeng, a student from Thailand attending college in America. He noticed textbooks are very expensive in America, and he was not a wealthy young man. However, he recalled that textbooks were much cheaper in Thailand, so he wrote to his family and asked them to see if they could find cheaper versions of the school books he needed back home. Indeed they could. American book publishers frequently print identical or very similar editions of the books they publish in America and sell them for much lower prices overseas.


Mr. Kirtsaeng saw the light. Not only was he struggling with the high cost of books, but so were his fellow students. So, he asked his family to send him a whole bunch of books from Thailand. He began selling them in America, posting the books on eBay. He could sell them to American students for a lot less than they could buy them at the student bookstore, while still making a tidy profit for himself. Mr. Kirtsaeng was happy. Students were happy. John Wiley and Sons (publishers) was not. They sued Mr. Kirtsaeng.


Here is what Wiley prints in their overseas editions: “This book is authorized for sale in Europe, Asia, Africa and the Middle East only [and] may not be exported. Exportation from or importation of this book to another region without the Publisher’s authorization is illegal and is a violation of the Publisher’s rights. The Publisher may take legal action to enforce its rights. The Publisher may recover damages and costs, including but not limited to lost profits and attorney’s fees, in the event legal action is required.” Wiley sued and won. Mr. Kirtsaeng was ordered to pay $600,000. Evidently, he sold a lot of books, though perhaps not enough to cover a judgment of this magnitude. Reportedly, he is back in Thailand.


Now, this case has made its way up to the Supreme Court, and there are many parties looking to overturn the verdict. The consequences are wide-ranging. One such group is called the “Owners' Rights Initiative,” and its motto is “if you bought it, you own it.” Among its members are the American Library Association, the American Association of Law Libraries, eBay, Goodwill Industries, and Powell's Books, the large Oregon used books retailer. There are also many technology vendors, as the same issue arises with high-tech gadgets purchased overseas.


In the 1990s, a section was added to the copyright law which states, “importation into the United States, without the authority of the owner of the copyright under this title, of copies . . . that have been acquired outside the United States is an infringement of the exclusive right to distribute copies.” However, this must be understood in conjunction with the earlier rule which states, “the owner of a particular copy . . . lawfully made under this title . . . is entitled, without the authority of the copyright owner, to sell or otherwise dispose of the possession of that copy.” We will not get into the esoterica of the legal arguments here, but focus on the consequences, which could be substantial. In terms of the technical legal argument, Wiley is arguing that the “first sale doctrine” applies only to books “ lawfully made under this title,” and only books published in the U.S., they say, are governed by (“lawfully made” under) U.S. copyright law.


The Owners' Right Initiative describes the potential consequences this way: “If the Court rules in favor of Wiley, libraries may be unable to lend books, individuals could be restricted from donating items to charities, and businesses and consumers could be prevented from selling a variety of products, from electronics, to books, to jewelry, to used cars.” Could selling your used Mercedes or Toyota be a copyright violation? It's not likely a car company would place such a restriction, but book publishers certainly might and do. And, it is important to note that the limitation, if upheld, could apply to libraries lending books, and even people giving away old copies, which is why the American Library Association and Goodwill have joined in this protest.


An amicus brief filed with the court by four booksellers, Powell's Books, Strand Book Store, Half Price Books, and Harvard Book Store, points out, “the interpretation Wiley advances would have made pirates even out of our Founding Fathers. In the 1730s and 40s, Benjamin Franklin operated a book store on Main Street in Philadelphia stocked primarily with books imported from British dealers. If Franklin opened his bookstore today, on Wiley's view, virtually every sale he made would be an infringement of copyright, since each such sale would constitute distribution of books manufactured abroad.” They also note that the library at the University of Virginia would not have been able to lend the books Thomas Jefferson purchased for them without permission from each publisher. Surely, they conclude, Congress did not intend to ban this critical process in the distribution of knowledge through the copyright law.