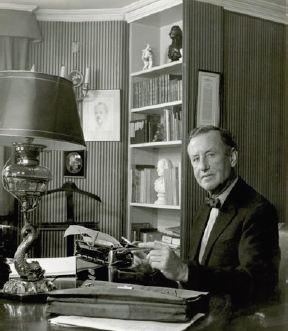 He will never be confused with Shakespeare. “Serious” literature was not the calling card of Ian Fleming. Excitement and intrigue? That is another story. While a few other books emerged from his pen, it is his tales of British spy James Bond that will forever be linked to Ian Fleming. The fictional British Secret Service Agent lived a dangerous yet charmed life, somehow surviving all odds to conquer the villain, and, in another sense, conquer the girl. Kudos, Bond, James Bond.

Ian Fleming didn't even begin writing novels until almost the last decade of his life, and he was not an overnight success. Nonetheless, he is one of the most collectible of writers to come along since the middle of the 20th century. His popularity far outpaces his brief career.


Fleming's career as a novelist began in 1952 with the publication of the first Bond book, Casino Royale. From then on, he produced one new Bond novel every year. His life would be over just 12 years and 12 books later with his death in 1964. Casino Royale quickly went through three editions in his home country of England, but it took awhile for him to find an American publisher. Even then, the book was not an immediate success. However, Fleming kept on churning out Bond books and somewhere along the way, his spy adventures caught readers' eyes. One who put a Fleming novel on his reading list was President John Kennedy, and if ever there was an imprimatur of cool in the early 1960s, it was being associated with Kennedy. Fleming's popularity grew. Finally, it would be the conversion of his books to film that would really make Bond (and Sean Connery) household names. Dr. No was the first of his novels to become a full length movie, and while more popular film adaptations of his work would come after his death, this one would launch the Bond character into the stratosphere of popularity.


Sadly for Fleming, he never had much opportunity to enjoy his great success. Before his first movie hit the screens, he suffered a heart attack, which slowed him down, and a second heart attack three years later in 1964 finished him off. Two more Bond books were published after his death, and the success of the films based on his work skyrocketed after he departed, continuing for decades as new actors came in to reprise the lead roll.


Oh... in his final years Fleming added a children's book to his repertoire, and it, too, became a very popular film – Chitty Chitty Bang Bang.


Twelve novels, two Bond short story collections, two nonfiction works and a children's book, plus a few miscellaneous items may not sound like the basis of a huge bibliography, but Bond never did play by the rules. The Queen Anne Press has just launched a 750-page bibliography of the work of Ian Fleming. It is written by Jon Gilbert, renown expert on the works of Fleming, who has worked at Adrian Harrington Ltd. since 1990. Gilbert explains, “Ian Fleming is best known as the creator of James Bond, an icon of 20th century popular culture, but he was also a journalist, publisher, travel writer, motor enthusiast, card player, accomplished golfer and noted bibliophile. Much has been written about Fleming and his legendary creation, but until now there has been no serious bibliographical account of his published work.”


Gilbert's research took him to the archives of Jonathan Cape Publishing (his first and regular British publisher), Macmillan and Penguin Books. He also went through collections at the British Library and various other locations, as well as interviewing family and friends of Fleming. The result is that this goes beyond being just a bibliography but is an insight into the writer's career. According to his nephew, Fergus Fleming, “The result of four years’ intensive research, Jon’s book is a welcome reminder of just how important Ian Fleming’s works are and how deeply they have influenced so many people.”


Now, you might wonder why such a comprehensive bibliography of a relatively recent writer whose books sold in large numbers is necessary. This does not sound like a formula for collectibility. Guess again. Fleming has become one of the most collectible of modern writers. A look at the AE Database of auction records reveals that 170 Fleming items, mostly books, have sold for over $5,000 since 1989. Just over half of these – 87 – sold for over $10,000. Last year, Fleming entered AE's Top 500 auction prices with a copy of Goldfinger, which sold for $68,500. The highest price paid at auction for a Fleming work came in 2004 when a copy of Moonraker inscribed to Raymond Chandler went for $102,000. Naturally, none of these figures includes books sold privately by dealers. The prices Fleming commands explains why anyone who collects or deals in books by him needs an extensive bibliography of his work.


Ian Fleming: The Bibliography is available from Adrian Harrington Ltd., email rare@harringtonbooks.co.uk, or through the Queen Anne Press website www.queenannepress.com. There is both a standard and limited edition vellum bound version available.