What May Be the Largest Book Theft in Decades Unravels 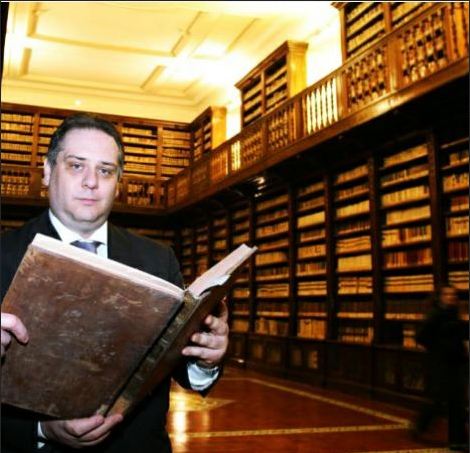 It's the story that keeps getting worse. A massive book heist in Italy apparently has ensnared thousands of books, millions of dollars, and made some important people look very foolish, and others look like criminals. Some believe this to be the largest book theft in decades.

Last spring, an Italian historian, Tomaso Montanari, walked into the Girolamini Library in Naples, a Church related institution generally not open to the public. He was amazed by what he saw. “Shocked” might be the better word. Rare old books were strewn all over the place, some on the floor with the empty Coke cans. The shelves were a mess. He was incensed. Worse yet, a couple of old librarians whispered to him about strange comings and goings in the night. He went to authorities, who apparently were unconcerned.


Still upset by what he had seen, Montanari wrote an article for a newspaper. It resulted in 2,000 academics signing a petition to remove the library's director, Massimo De Caro.


Massimo De Caro, it turns out, is not your typical librarian. I've never heard the expression “from Hell” used with a librarian before, but Massimo De Caro was surely the librarian from Hell. He came to the Girolamini Library last year as a result of political connections he had with various government agencies, notably the cultural ministry. He had an impressive resume, filled with falsehoods, but apparently no one checked very carefully. Connections matter more. He claimed to be a descendant of some princes, which he was not. He claimed to be a graduate of Siena University. He was not. He said he lectured as a professor at Verona University. False again. What he did come to the library with was a long history of shady dealings. These deals stretched from Argentina to Russia, with the common thread being the aforementioned word, “shady.”


Perhaps if Mr. De Caro had tidied the place up a bit more, his alleged deeds would not have been discovered. He is charged with taking various steps to hide the activities, such as altering card records of books to make them “disappear,” and replacing some with very good facsimiles. Meanwhile, he apparently kept taking large numbers out at night without ever swiping his library card. When last we reported on this story in July, the estimate was 1,500. It has now risen to 4,000. Four thousand is a lot of books, especially when you are taking antiquarian ones of significant value. Estimates have now risen from a million to several million dollars worth. Mr. De Caro could have started his own rare book library if he wasn't so busy selling them as fast he could.


What makes this story even more disturbing is a heist of this magnitude, and what is necessary to move so many valuable books, is hardly a job one person can handle. Mr. De Caro was not going home and posting them on eBay. He evidently had an international network of people who were selling these tomes. Some were clearly associated with the endeavor, others may have been unwitting accomplices, or perhaps witless accomplices who looked the other way despite the warning sirens these transactions should have set off. “I know nothing,” as Sargent Schultz used to say.


Actually, it gets even more disturbing. De Caro needed help getting all of these books out of an alarmed library at night. Police believe one of his accomplices was none other than the curator and a priest, Father Sandro Marsano. It is alleged that Father Marsano disabled the alarm so that De Caro could make off with the books. The Priest explained that he thought De Caro was engaged in a temporary removal of books so he could fix up the library. That would explain his removing them under the cover of dark and mentioning it to no one else. Either Father Marsano was incredibly naïve, or he did not take a vow of honesty.


Sometimes, these stories have a happy ending. Everything is recovered and heritage is restored. That will not be the case here. Too many books have scattered far and wide. They have been found in places as diverse as New York, London, Munich, and Tokyo. There is no hope all will ever be recovered. Hopefully, the major item taken, the only known copy of a Galileo work, will be found. Many books will not. There is much blame to go around, a healthy part of that blame going to those charged with protecting the nation's cultural heritage.