The Gutenberg of clear thinking traced to Poughkeepsie 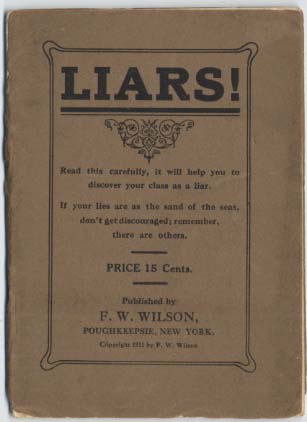 Gutenberg on the Hudson

The engaging book L I A R S published by F. W. Wilson of Poughkeepsie in 1911 is a remarkable condemnation and defense of lying.  The author, whose name is not disclosed perhaps for reasons of personal safety, has possibly created an entirely original work but seems at first blush to owe something to earlier authors.  If so, he may have began his book[let] on lies with a lie.  I hope not.  In particular an article in the Atlantic Monthly, Vol. XI February 1863 relentlessly comes up as a best, if not perfect, match in Google search for the article’s first paragraph.  For me it’s a concern because this book has made me aware that life is a cesspool and I am in it.  Perhaps Mr. Wilson is the unnamed author and true to his subject, demure.  It’s a shame for this book reaches into the empyrean to deliver perspective on both personal and business relations and the current presidential election and its author deserves their due.  For this honor I nominate Mr. Wilson.

For those who do not yet have a copy of this Gutenberg in the cradle a link is provided at the end of this article to the full text, all 4,544 words of it.  It is a slim work, grand in comparison to the 272 words in the Gettysburg Address and brief when juxtaposed to War and Peace that in its original Russian and French editions is a svelte 460,000 words while the English version that has tortured American students for generations languorously proceeds to its conclusion north of 560,000.  The author of the Poughkeepsie masterpiece gets in, gets started, gets done and is on his way home before the Little Princess, in Tolstoi’s third chapter utters, at the 1% mark.


“’Charming,’ sticking the needle into her work as if to testify that the interest and fascination of the story prevented her from going on with it.”


Whew that was close.  For Tolstoi’s captives there would be mountains more of words to plow while for acolytes of the Poughkeepsie Shakespeare only bows to be taken.  Brevity is the soul of wit.

More to the point War and Peace, in ponderous detail, details the French invasion of Russia and its impact on Russian society, a small event that without snow becomes mud.  Mr. Wilson by comparison, with rapier sharp prose details the thunderous characteristic that separates men from all other living things, the ability of obfuscate, mislead and lie.  A dog will like you or not, with mankind all the shades of warmth, need, desire and calculation converge to make the simple calculus of “what does he want and what does he mean” endlessly more complex.  Mr. Wilson, with the precise insertion of the surgeon’s scalpel cuts right to the chase – thus saving other potential Tolstois from writer’s cramp and his and their readers from blindness.

Plunging in Mr. Wilson allows that “all men are liars” and I cannot, in all modesty disagree.  Personal experience suggests that the line between truth and fiction is a distinction least clearly seen in the present, later obscured by time, forgiven by inheritors, forgotten by the disinterested and retained only by the few who coax grudges to life and water them daily.  You’ve no doubt heard of the seven deadly sins.  Make that eight.

In his work the Poughkeepsie seer sets out to help the shy and near-sighted to see their errors and then grades them by purpose and motive.  For many readers a fair examination will clarify the reasons why they won’t be going to heaven, something they already knew but may have forgotten.  The author will remind them.