Another Internet Scam Seeks to Lure the Unsuspecting 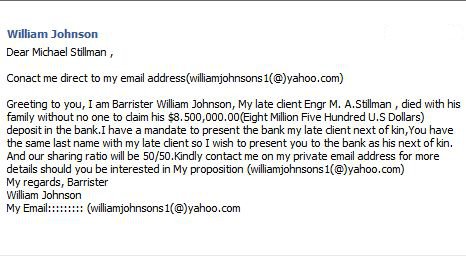 The message looked personal, but was just another scam.

Periodically, we report on a latest internet scam, as anyone who reads this article is, quite obviously, an internet user, and thereby a potential victim. Sure, you might think we all know enough not be drawn in, but the very fact that we still get these appeals in our email accounts is proof to the contrary. We would not get these solicitations if they never worked. The spammers continually think up new ways to get us to drop our natural wariness, and our guards, one more time.

This latest email attempt came as a surprise as it was sent to me personally, by name. I hadn't seen this before. Usually, it comes to “my dear beloved friend” or some such boilerplate salutation which shows the sender does not know me any more than the millions of other people who received the message. Something sent to me personally, however, seems to warrant more attention than a typical spam.


The sender, one “William Johnson,” notified me that his client, the late “M.A. Stillman,” had died, apparently without heirs. Mr. Johnson, as a caring tribute to his late client, wished to steal his money, and figured since I had the same last name, I could be presented to the bank as his next of kin. In return for participating in the fraud, Mr. Johnson agreed to share the legacy 50-50 with me. This would be no small prize, since M.A.'s bank account contained a cool $8.5 million dollars.


Where M.A. lived, and this money was located, was not revealed. However, I guessed England. I reached that conclusion based on Mr. Johnson calling himself “barrister.” In America, we don't refer to lawyers as “barristers.” We call them “ambulance chasers,” and various other names far worse and unprintable. It is primarily politicians who refer to lawyers so contemptuously, which is really quite ironic. In America, the only group that shows up in polls as being regarded more lowly than lawyers is politicians. Lawyers at least have the hope of some day rising to the level of used car salesmen. For politicians, this is the impossible dream, a goal too far to reach. I digress.


Perhaps I might have been a bit more intrigued by the “barrister's” offer if his English had been a little more polished. One would expect someone who graduated law school in England to speak English better than the typical Nigerian dictator's widow. Eliza Doolittle would have been embarrassed by Mr. Johnson's grammar. As the learned barrister explained, my namesake “died with his family without no one to claim his $8,500,000.” Don't they teach about double negatives in English schools? Barrister Johnson haphazardly ends sentences with commas, leaves no spaces between sentences, and various other grammatical mistakes. He asks me to “conact” him. Wouldn't a real barrister have his secretary proofread his letters offering $8 million deals before sending them out? It's enough to make one wonder if Mr. Johnson truly is a barrister. At least it made me wonder. Mr. “Johnson” is obviously into committing fraud against someone with my last name, but it looks to me like I am the intended victim, not the mythical “M.A. Stillman.” No thanks.


So, the lesson here is no matter how personal the message may be addressed, if it doesn't look right, it almost certainly isn't. It just isn't safe to walk the streets of the internet anymore without extreme caution.