Web Courtesy - A Reflection of Self 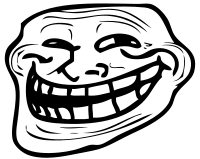 The "trollface," first appearing in 2008, is often used to indicate trolling in Internet culture.

I write this article on web courtesy based on my own experiences online. They include instant message chats, chat rooms, discussion forums (as a user, moderator, and administrator, at varying times), as a tech support aide for AE, and most recently and consistently, as a reader of articles and news, where user comments are usually allowed, and often abused. I have frequented the Internet since 1995, and am online in some way everyday. This is simply commentary on what I have observed, and participated in, over the last 17 years. I also want to note, I am not a psychologist, and base my own analysis off common sense and experience.

Mankind possesses something called the human condition, which encompasses everything separating us from animals, and which are not specific to gender, race, or class. Normally, Wikipedia is frowned upon as a quotable source, since anyone can add to it, but in an article about courtesy on the web, I feel it is a prime example of how powerful something can be when people work together on the Internet. So, I draw from it for my information on the human condition. It begins its definition by calling it features that are inescapably human. This boils down, for me, to one word: fallibility. To be human is to err. When people go online, they bring this condition and fallibility with them. My first observation, hence, is that when I read a comment I don't agree with, or even offends me, I try to remember that no one on the planet is perfect (though some may argue this!). I have no idea what went through the person's mind as they typed whatever has left a bitter taste in my mouth. I have no idea what may, or may not, have just occurred in their life. Maybe their dog just died, or some other unusual event has transpired, and one way for them to express their sadness, grief, or anger, is to lash out on the Internet. My second observation is that the Internet is one of the safest places to "act out."


The Web is normally anonymous, and therefore people may act without fear of retribution or repercussion. Unfortunately, this leads to people doing just that, every single day. It has given birth to a new term for people who's online lives are defined by negative acts – what are known as "trolls." As defined by Wikipedia, trolls are people who post "inflammatory, extraneous, or off-topic messages in an online community." Trolls take from an otherwise positive, productive, and/or civil interaction, give nothing back in terms of direct contribution, but do their best to produce negativity and malice. It seems clear to me these are attempts to project their own emotional or mental state on other people. Happy folks don't want to bring down those around them; miserable people often do. We don't need psych degrees to see this. It's important for me to remember these things, and remember that trolls seek attention and anger, because when I don't, I'm likely to be provoked, to react in a negative way, which only makes things worse. By engaging an online troll, I have given power to them, because by responding, I'm admitting they have an effect on me. And that's exactly what they want. Misery loves company, and so do trolls.


In effect, I have been, and continue to just state the obvious. If I'm happy, and satisfied with life, I behave that way in the real world, and on the web. If I'm irritable, and looking for a fight, the Internet is a great place for that as I don't run the chance of getting punched in the face. And I would argue that for many people (I'm talking computer geeks), the Internet is the ONLY place they feel the safety to act out. A geek at a frat party would probably keep his mouth shut (I'm not going to get into analysis of masochism here), no matter how angry or sad he is. But on an internet discussion forum, there is no physical reality, and we are on a level playing field, for better or for worse.


So, to sum up: courtesy on the web is entirely about one's own personal state inside. It's impossible for me not to reflect mine. And when I see things that bother me, I ask myself, "What don't I like about this? And why?" It always ends up being a reflection on me. It's easier to just try to remember that the person on the other side is in the same boat of humanity, with their own problems, and that it has nothing to do with me unless I decide to make it so. I've heard resentment is like taking poison yourself and expecting the other to die. Responding to a troll reminds me of that, as negativity inside me is like poison, and it has no real effect on the troll who I allowed to place it there. Therefore, I recommend combatting the Internet troll with love, and tolerance, and compassion. That's not what they want to hear or read.


If this article were posted on a discussion forum, I would close with, "let the trolling begin!" Here, I prefer, "have a fantastic day, and may you find the material (if you're a collector), or buyers (if you're a dealer or auction house), you're looking for!"