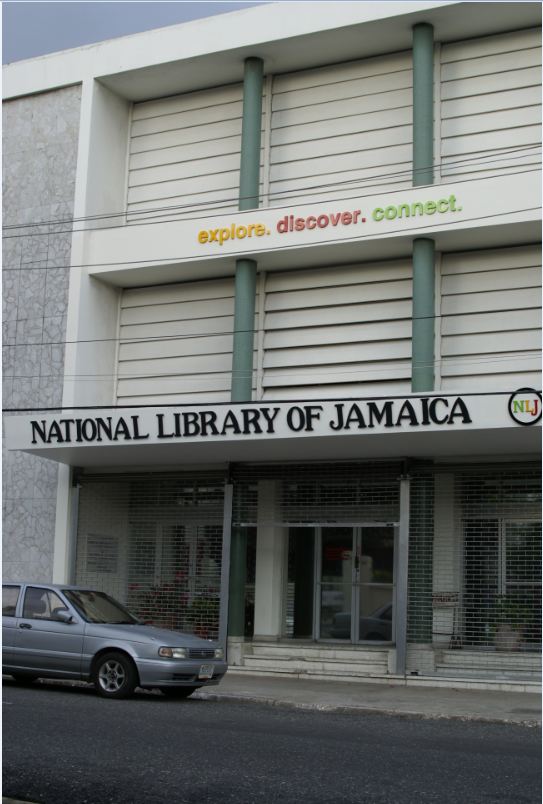 The National Library of Jamaica.

Back to Jamaica, to explore a new prestigious book from the National Library ! I had already been through a copy of Thomas Gage’s account of travels to America - that played a key role in the English capturing the island in 1655 (see here) -, and through my favorite Americana book, Esquemeling’s History of the Bucaniers - telling us about the period when Jamaica had become the capital of buccaneering, and Port Royal the « wickedest city on Earth » (see here), and was now awaiting for a highly respected book : « A Voyage to the Islands of Madera, Barbados, Nieves, S. Christophers and JAMAICA, with the Natural History of the Herbs and Trees, Four-footed Beasts, Fishes, Birds, Insects, Reptiles, &c. Of the last of those Islands », by Hans Sloane (London, 1707). It is a legendary body of work, a cornerstone of the history of the island. The employee of the National Library heavily dropped the thick in-folio book on the table in front of me, smiling with content. This was the first volume, published in 1707 - the second one, dedicated to zoology, did not see the light before 1725. I had never come across a physical copy of this book yet, and was deeply impressed at its charisma, its size and weight, and at the sum of knowledge it contains. Thousands of pages, more than two hundred « large copper-plates as big as the life », as the title-page reads, a gorgeous and folding « new map of Jamaica » I could not take my eyes off for a while… Meet Hans Sloane’s book, finally !


In Decembre 1687 the small fleet of the new Governor of Jamaica, the second Duke of Albermale, entered the bay of Caguay (later on Kingston). «General Monck, the first Duke of Albermale, wrote the historian W. Gardner, who never liked the second one, had left a unique son who not only did dissipate his wealth but also had affected his health in a licentious lifestyle. A colonial government seemed to be the best way to save him and James [II] could not refuse this privilege to the son of the man who had put the Stuarts back on the Throne. » The Duke was never too pleased with his new duties. He came several months after being appointed by the King, only to secure his share of the gold the English were retrieving from a Spanish galleon that had sunk close to Hispanola. The Monck family, yet, was no stranger to Jamaica. The first Duke of Albermale was the strongest supporter of the Governor of the island, Thomas Modyford, during the days of buccaneering – they were relatives. After the sack of Panama in 1671, the Spaniards officially complained to the Crown of England about an act of what they considered to be piracy. For politics’ sake, Modyford was sent to the Tower and Henry Morgan (who had plundered the town under a Commission of Modyford, himself backed by General Monck in England) soon followed to London, where he was forced to remain for three years’ time, until the heat started to cool off. He spent many a night drinking and gambling with the son of the Duke, the very same Monck who came as the new Governor of the island in 1687. The two men were glad to see each other again - the former buccaneer who had fallen into disgrace was even rehabilitated by the Duke a few months before his death.


The Duke’s wife suffered from mental disorder and needed constant care – the Duke thus asked a young and promising Irish-born physician to come along with them to Jamaica : Hans Sloane. A very active mind, deep into every scientific field of his time, Sloane had acquired the certainty that botany could not be learnt nor taught behind a desk any more. Scientists had to travel, to see for themselves and to explore the world they intended to describe. He was already a Fellow of the Royal Society when he left Portsmouth aboard the Duke’s fleet in Septembre 1687. After a short stay in Barbados, he reached Jamaica four months later where he remained for 15 months, until the Duke’s sudden death, urged his widow to go back to England. He had time enough to collect more than 700 specimens of plants, some live animals and artifacts. Back to London, he eventually published his book at his own expense, that earned him great respect and also the seat of President of the Royal Society.