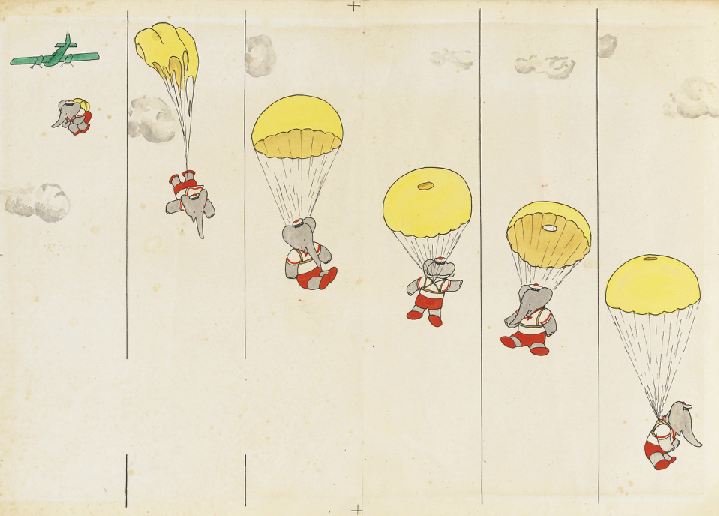 One great leap forward for Babar.

Comics have come of age. Your teachers may have looked at them with disdain; your mother threw them out the minute they began collecting the slightest bit of dust. This was not literature, not something to be confused with actual reading. While your mother may have thought them worthless, some recent prices paid for old comic books have already established she was wrong on that account. However, now comics have received the ultimate imprimatur of respectability. For the first time, 268 years after they were founded, Sotheby's has held a comics auction. And not just any Sotheby's. Sotheby's in France. That is the ultimate sign of not just monetary value, but class as well. Comics have arrived.

Not only was the auction in France, but the material was also French. No Batman and Robin, Mickey and Donald, Annie and Sandy. Instead, the important names were Tintin and Babar. Tintin never quite made it to the first level in America, but even in America's most Francophobia of times, the “freedom fries” era, kids still loved Babar. The chubby elephant's lime green outfits proved that even the French can have lapses in taste. Never mind. He is beloved all over the world, a rival in popularity to Mr. Disney's Mickey Mouse. Babar is one elephant not afraid of a mouse.


The auction was entitled Bande Dessinée, literally “band of drawings,” but that is the French equivalent of “comics.” Jean-Marc Thévenet, an expert in the comic arts, was brought on board to curate the sale. He explained, “the auction reflects our conviction that Comic Strips have become an art-form in their own right. In short, the sale aims to be a catalogue raisonné of the First One Hundred Years of Comic Strips!”


At the top of the price list was a strip from The Adventures of Tintin, one entitled The Shooting Star, published in Le Soir in 1941. It represents the beginning of this latest adventure in the life of the young Belgian reporter (Tintin) and his dog, Snowy. Here, they set out on a mission to find the shooting star, or meteor, that has crashed into the ocean. The mineral from which it is composed has amazing powers, so whoever gets there first will have something of extraordinary importance. The cartoonist, Georges Remi, better known by his pen name of Hergé, created this cartoon from Nazi occupied Belgium, so Tintin takes on more the role of a nonpolitical explorer, rather than a reporter, so as to avoid more controversial subjects. This original panel was published as the start of the serial in black and white, but the story would later become the first Tintin color comic book. The price, all in, when the hammer came down was €234,750 ($295,506 in U.S. currency).


While Hergé and Tintin were the dominant performers in this auction, we do have to tip our hat to Babar for a good effort. A board from Babar and his Cousin Arthur, from 1946, brought in €17,500 (US $22,029). The panel shows Babar jumping from an airplane (yes, he has a parachute – this was not the last Babar story). In a sequence of views we see the elephant in, what else, a jumpsuit, as he first leaps from the plane, and then in various stages of descent. By the way, the jumpsuit is red and white, Babar not yet graduating to his familiar lime green. This board was created by Laurent de Brunhoff, and it was his first Babar story. Babar was created by his father, Jean de Brunhoff, who died in 1937. His son did not pick up the tales until after the war, thus the nine year gap.


Overall, this auction was not a major success in that only 25 of 92 lots were sold. Those that sold did sell, on average, for more than the high of their estimate range, a sign that buyers were willing to pay up for what they wanted most. Total sales were €604,125 (US $760,473), while the estimate range of the items that sold was €513,500 - €585,000. The softness of overall sales likely reflects the current state of the comic book market in France. Comics have been selling at auction for several years in America, and the field, and number of collectors, is obviously much farther along now on the west side of the Atlantic. It has literally exploded in the past couple of years. We suspect that comic collecting is not yet as developed in France, comparable to where the market was in the U.S. several years ago. If the American experience repeats itself on the continent, we can expect to see more comics coming to auction, and more items being sold, in the years ahead. This is just the beginning.

Editor's Note:  A reader brought our attention to a couple of Sotheby's auction catalogues from the 1990s for comic books. While Sotheby's had described this as a first dedicated comics sale, they may have been referring to the type of strips herein featured, might have forgotten about earlier auctions, the French office might have been referring only to in France, or perhaps we just misunderstood something. Whatever the explanation, we appreciate the heads up.