It's 7 years in the Big House for Presidential Documents Thief 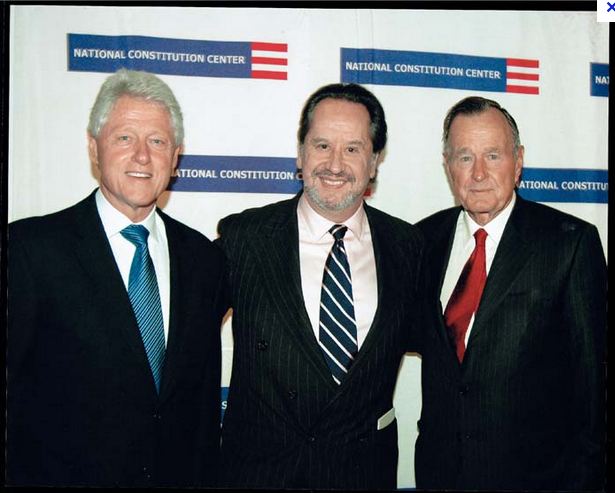 He was one of America's foremost collectors of presidential material as well as being an advisor to several U.S. Presidents on matters of protocol. Now he is going to jail for seven years. It is not a crime to collect presidential documents. It is a crime to steal them. Barry Landau stole them, lots of them. The count is at least 6,000 items, possibly 10,000. This by a man who was friendly with presidents and important institutions, including the National Archives. The question remains, how could he have pulled off so many thefts for so long at some of the most prestigious of institutions? For all the warnings about security, Landau still managed to conduct theft on a massive scale. Perhaps his reputation and connections made him the last man you would expect, but still... 10,000?

In an earlier interview, when Mr. Landau was still a respected collector, he said his interest in presidential collecting came after a chance encounter as a young man with President Eisenhower, and proceeded after meeting and developing a friendship with Alice Roosevelt Longworth, daughter of President Theodore Roosevelt. She was a long time hostess on the Washington scene and he undoubtedly learned much about presidential protocol from the great lady. Landau described himself as having “the ability to put other people at ease,” a skill he put to good use at first, bad use later.


It is amazing how people can assume they will never get caught. Perhaps if you commit 10,000 successful thefts, you can come to believe that. Eventually, though, your luck is bound to run out. Landau's downfall came on July 9, 2011, at the Maryland Historical Society in Baltimore. He made arrangements to visit their collection, arriving with a list of documents he wished to see, and an accomplice, a much younger man named Jason Savedoff. Savedoff, like the 63-year-old Landau, has pleaded guilty, but has not yet been sentenced.


Curators became suspicious of the behavior of the two and called police. They accessed a museum locker to which Savedoff held a key and discovered 79 historical documents within a computer bag in the locker. Sixty of these documents belonged to the Maryland Historical Society, including a land grant signed by President Lincoln, valued at over $100,000. It was now just a matter of time before the police would search Mr. Landau's apartment, discover thousands of stolen documents, and place him under arrest. One guilty plea later, on the 27th of June, he was sentenced to seven years in prison plus an additional three on probation. Even when freed, he will not be able to visit museums during that three year period without his probation officer's permission, which hopefully will not be granted.


According to the U.S. Attorney's office in Maryland, Landau and Savedoff wore specially designed sports coats and other outerwear with hidden pockets. Since they were taking primarily manuscripts and thinner documents, these were easier to conceal than would be books. After stealing documents, they would attempt to erase the record of it at the museum so it would not be missed. Where card catalogues were used, they would simply remove the card. The reality was that the institutions seldom were aware that items had been stolen. That is particularly important with one-of-a-kind manuscript documents. If you're selling or displaying a stolen book, it can always be a different copy, but if it's a handwritten presidential inaugural speech, and it is known to be missing, it is hard to claim you have a different copy. You don't want it to be posted to a stolen items list.


When agents raided Landau's apartment, they seized 10,000 items, over 6,000 of which have now been traced as stolen. Landau was evidently keeping many of the documents for his personal collection, as some would appear too unique and obvious to sell. Others were sold to unsuspecting customers. He was also ordered to reimburse three dealers who purchased documents from him in the amount of $46,525. This included $35,000 worth of “reading copies” of speeches delivered by Franklin Roosevelt. “Reading copies” are the ones the President used to deliver his speeches, and contain his personal annotations.


The amount repaid, however, is a small part of the value of what he stole. There were three other reading copies of Roosevelt speeches Landau kept in his own collection, valued at over $100,000 each. Among these was Roosevelt's 1937 inaugural address. The document is water stained, but this is one fault for which Landau cannot be blamed. It was raining the day Roosevelt gave his second inaugural and the papers became soaked.


Among the documents taken from the New York Historical Society was a letter from 1780 sent by Benjamin Franklin, in France, to John Paul Jones, America's first naval hero. It references the quantity of gunpowder being delivered by France to the U.S. Navy. The letter is estimated to be worth in the hundreds of thousands of dollars. Other documents taken from the New York Historical Society included letters by Washington, Hamilton, and Jay. From other institutions came letters from John Adams, Marie Antoinette, Karl Marx, and Sir Isaac Newton. It is not clear how some of these, Newton in particular, who died long before there was a U.S.A., pertain to American presidents.


U.S. Attorney Rod Rosenstein issued a statement saying, “The evidence proved that Barry H. Landau was a con artist who masqueraded as a presidential historian to gain people’s trust so he could steal their property. The revelation that Mr. Landau was a prolific thief sent a wake-up call to museums, libraries and other institutions that entrust valuable historical items to persons who claim to be engaged in academic research.” While he is right that this is a wake-up call, one wonders whether the call will be answered. Stories like this are all too common, and the volume of material Landau stole before anyone caught on is a testament to the limits of security. It is easy to jump on the institutions for laxness, and perhaps some piling on is deserved, but they work with limited staffs and resources, and the types of roadblocks needed to assure total security can make it difficult for legitimate researchers to conduct their work. Nevertheless, as this case and others make clear, more needs to be done.


Landau reportedly made a few noises in court about being ashamed and hoping to some day redeem himself, but his honorary membership in the presidents' club can be considered permanently revoked. He may, seven years hence, come back to talk once again about presidents past, but he will never be able to utter five of the most famous presidential words ever spoken - “I am not a crook.”