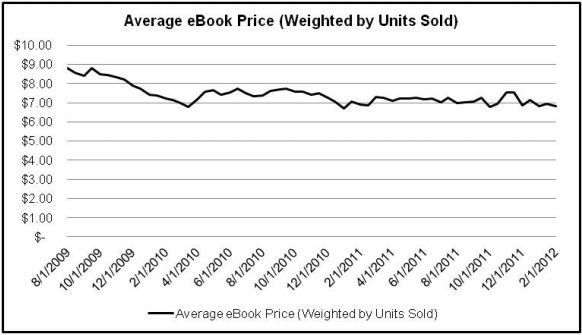 Graph which B&N says shows that agency prices have not increased cost of e-books.

Barnes & Noble has joined many in the publishing industry in the battle against Amazon over electronic book pricing. This battle bears many similarities to that of a generation ago which pitted Wal-Mart against Main Street. However, there are differences as well, and the outcome is not quite so certain this time.

Amazon reprises the role of Wal-Mart a generation ago. Amazon wants to sell e-books for less. It is a business plan as simple as that of Wal-Mart. Sell more merchandise than anyone else by charging less. Crush the competition by selling it so cheaply that no one else can match your price. Consumers may treat you with disdain for being so crass, for providing so little service, but they still flock to your store. Ultimately, we follow the cheapest price. It's like our feelings toward government. We like good schools, roads and bridges, parks, museums, all kinds if public services, but we prefer tax cuts.


Now, as previously noted, there are differences from the Wal-Mart vs. Main Street battle. When Amazon entered the e-book business, it was not trampling on someone else's turf. There was no Main Street. No one was there. Amazon wanted to make sure it stayed that way. Even without competition, they sold e-books cheaply, at low margins, at times even at a loss. The plan was to so dominate the e-book business that no one else would ever get a foothold. It worked like a charm. Amazon grabbed a 90% market share, selling most books for the low price of $9.99.


You might think this would make the publishers happy. Unlike Wal-Mart, which used its large orders to bludgeon suppliers into giving them lower wholesale prices, Amazon paid up, absorbing the costs of selling cheaply itself. The publishers were still not happy. They believed cheap e-books were hurting their sales of more expensive printed editions. They also feared cheap prices would lead consumers to believe that $9.99 was the fair price for a book, making it difficult for them to ever again sell books at higher prices. They wanted Amazon to charge more.

Into this mix came Apple, the computer/mobile phone giant, today the most valuable company in the world. Apple wanted to sell e-books too, but Apple, unlike Amazon, doesn't believe in using low margins to gain market share. Apple wants to be paid well for everything it sells. However, Apple did not want to be in a position where it was selling merchandise at a higher price than someone else. Most of what Apple sells is its proprietary products, so this is not a problem. E-books are not, and Apple did not want consumers to think they were overcharging. Since Apple still wanted to make healthy margins, that left only one solution to this dilemma. Get Amazon to raise their prices. Since the publishers, for their own reasons, also wanted Amazon to raise prices, Apple and the publishers now found themselves having a common interest.


According to a complaint filed by the U.S. Department of Justice, five publishers met with executives from Apple, and they hammered out a deal. Rather than use standard wholesale pricing for their e-books, they would switch to what is known as the “agency” model. The publishers would set the retail price, and the retailers, be it Apple or Amazon, would have to charge this amount. In return, they got a fixed commission (30%). This way, Apple could sell at as low a price as anyone else. They would not look bad. Of course, Amazon, being forced to sell at the same price, could not secure market share by being cheaper. It was like manufacturers requiring Wal-Mart to sell at the same price as Main Street. There goes the competitive advantage. Since the publishers' prices were generally $12.99 or $14.99, not Amazon's favored price of $9.99, it also meant that the price of e-books would increase for the 90% of customers who were buying from Amazon.


The Department of Justice cried “foul.” It determined this was a case of conspiracy and price fixing and took Apple and the five publishers involved to court. Three of the publishers quickly agreed to settle, discontinuing their agreements with Apple and the setting of retail prices. Those publishers were Hachette, HarperCollins, and Simon & Schuster. Two other publishers, Penguin and MacMillan, along with Apple, did not agree to settle. The court then opened the floor to others who wanted to comment on the case, which leads us to Barnes & Noble.


Barnes & Noble recently filed a brief attacking the government's action. Here is where we see shades of Wal-Mart vs. Main Street, as many of B&N's arguments are very similar to those of Main Street. The bricks and mortar retailer says the arrangement has increased competition. It cites a declining share of the e-book market for Amazon, from 90% to 60%, and notes that it now has been able to successfully enter the market as a competitor. Prior to this, Amazon's willingness to sell books even below cost made it virtually impossible for them to enter the business. B&N then goes on to tout some of the claimed advantages to the public, booksellers, and authors arising from their ability to compete, such as providing a showroom for new books. This is where people can learn about newly released titles. The argument very much resembles Main Street's claims that the small, local store provided explanations and service for products that would disappear if Wal-Mart were allowed to come to town and undercut them on price.


Barnes & Noble argues that the agreement has given consumers more choices as to where to buy e-books, undoubtedly true. “Barnes & Noble, Apple, independent booksellers, and others have emerged to provide consumers more choice in where and how they shop for e-books,” B&N accurately claims. They then say, “Under agency, publishers have engaged in vigorous competition on price, which, contrary to the superficial pricing analysis in the complaints before the Court, has resulted in lower ebook prices.” The accuracy of this claim is less obvious. They display a graph showing e-book prices either slipping or being flat for several years without citing the source of this information. Even if true, this would not mean that agency pricing has helped, or not driven prices higher than they would have been, as other factors could be involved as well.


Of course, some people will say rather than a Wal-Mart/Main Street comparison, Barnes & Noble should look in the mirror. A couple of decades ago, small book shop owners were making a similar contrast between giant, chain book retailer Barnes & Noble vs. small, locally owned book shops. B&N was far less concerned about concentration of book sales into the hands of one large retailer at that time. But, leaving that aside, are we better off defending Amazon's ability to sell books as cheaply as it wants, even if it drives out competitors who may offer more services? If we believe B&N's claim, the choice is obvious: “The end loser of this unnecessary and burdensome regulatory approach will be the American public, who will experience higher overall average e-book and hardback prices and less choice, both in how to obtain books and in what books are available.”


I believe everything B&N says except the one about higher prices. I find it very hard to believe that forcing Amazon to charge higher prices lowers the overall price of e-books. In the Wal-Mart case, this might have been somewhat believable, though that is not what happened. One could say that once Main Street shuttered its doors, Wal-Mart would have been free to raise prices and it would have been very difficult to reopen those shops, particularly since Wal-Mart could have reinstated temporary price cuts at any time to drive them back under. However, competition can be set up against an online seller such as Amazon, even if it holds 90% of the market, in a heartbeat if it raises prices. Setting up a competing website is an easy, relatively inexpensive proposition.


Ultimately, the decision in this case will not be based on whether a dominant, bargain basement Amazon, or a wider array of merchants who offer different features but who all charge more is better for consumers. It will be based on whether the parties in this case illegally conspired to place a restraint on trade. It is left for us to ponder the more difficult question of which is best for society.