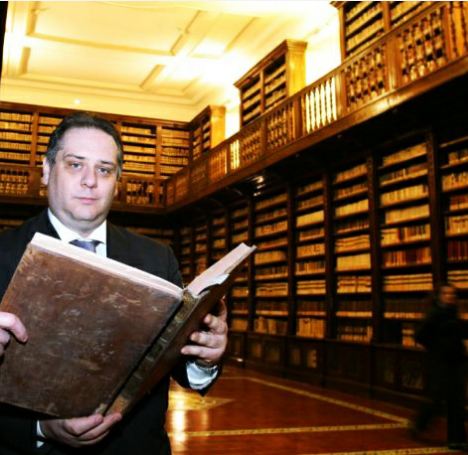 Details of a massive book theft from a very old Italian library have emerged over the past two months. It's a case that must be leaving scholars, and police, with their heads shaking. How could this happen?

Last April, Massimo Marino De Caro, director of the Girolamini Library, the oldest library in Naples, dating back to the late 16th century, reported 1,500 books were missing. Mr. De Caro is something of a story in himself. No one seems to be exactly sure how he got the job. He had no particular qualifying credentials as far as can be seen. What he did have on his resume was a number of shady dealings, including an affair involving Venezuelan oil and other intrigues. These aren't typical of the average librarian. He also appeared to be severely neglecting the library, almost as if he were preoccupied with something else. A petition had been presented with signatures of 2,000 librarians and academics questioning why he had been given the job. Some scholars had found the library in disarray, books lying on the floor gathering dust, the facilities not being properly maintained. Several of Mr. De Caro's assistants seemed to come from similarly questionable backgrounds. Why were they placed in charge of this ancient library and its collection of 160,000 books?


It was shortly after this petition was filed that Mr. De Caro “discovered” 1,500 books were missing. Workers then led police to security camera films. Lo and behold, surveillance tapes showed Mr. De Caro himself leaving the building with a large number of books. Evidently, he had not checked them out with his library card.


After the discovery of the evidence from the security cameras, Mr. De Caro was suspended from his position. Further searching led to a storage facility connected to Mr. De Caro containing about 1,000 books, 250 of them having the stamp of the Girolamini Library. In late May, the library director was arrested. Four other fellow librarians, or accomplices, depending on your point of view, were also arrested. Three of them were Argentinians, rather than Italians. Also implicated in the scheme has been the library's curator, Sandro Marsano, a priest.


Books believed to have come from the library have shown up in numerous other locales, either for storage or sale. Some 400-500 books were brought to the auction house of Schauer & Zisska. When the German auctioneers learned of the possible background, they immediately withdrew the lots. A couple dozen others were reported to have shown up at an English auction house. Estimates of books taken have now climbed to 2,200, and some may have shown up now at various places around the world. To say this theft, and the ensuing mess, is large would be an understatement. Tracking them all down and restoring the library to its prior position will probably be impossible. The ultimate recovery will most likely have to be described in terms of a percentage. Some older libraries don't receive a lot of visitors any more, and when the cats are away, you know what the rats can do.


A copy of the first edition of the Book of Mormon, or least what is left of it, was stolen from the shop of an 88-year-old bookseller in Mesa, Arizona, in late May. After a couple of weeks away, it was located. This is a tale with a better ending than the first, and yet many in the trade are still not feeling the love.


Helen Schlie, the older Arizona bookseller, specializing in Mormon material, has owned a copy of the first edition Book of Mormon since she and her husband purchased it from a man in need of cash back in the 1960s. Mrs. Schlie is a Mormon and obviously a devoted congregant. However, what she decided to do with her first edition a few years ago left many in the book selling trade, especially the Mormon book field, more than a little dismayed. The Book of Mormon is not a rarity. It was published in 1830 by church founder Joseph Smith in the rather astounding for its time run of 5,000 copies. Estimates are at least 500 copies survive. Nonetheless, it is a six figure book as Mormon material is highly collectible and 500 isn't anywhere near the number of people who would like more than just about anything to own a copy.


Mrs. Schlie had a way to help many more of them own one. It is the terribly controversial practice of slicing a book apart and selling off the pages individually. Car enthusiasts call it parting out. The general rule is if you have a seriously defective copy, particularly one with pages missing, it is acceptable to cut it apart. If the copy is compete, some people think cutting out the pages, which forever destroys the item as a book, is a sacrilege, particularly if it is a religious work. An article on the Washington Post website quoted one Utah based Mormon bookseller as saying the theft was “Divine intervention,” another said, “It’s incomprehensible how someone could use their religion to mask what is, to me, just out-and-out greed.” Tough words directed at a woman of 88, but like we said, some people consider breaking apart a book, and particularly one like the Book of Mormon, almost a crime. Mrs. Schlie, who put the pages in a nice frame and sold them for $2,500-$4,500, thought of it as a way of making a piece of the founding document of Mormonism available to many people for whom possessing such a connection was otherwise impossible.


Apparently, Mrs. Schlie was not too keen on security with her prized possession. She gladly showed it to anyone who walked in the door, and some people liked to have their picture taken with her book. She did not disguise where she kept the book, and on the night in question, she simply placed it in a fireproof box inside an unlocked filing cabinet. That was on a Friday evening, after she had shown the book to some browsers. When she looked to show it to some other visitors the following week, it was gone.


We next hear of the book a couple of weeks later when a dealer specializing in Mormon works in Dallas received a phone call. It was from Jay Linford of Herndon, Virginia, and he had some individual pages from the Book of Mormon for sale. The “unnamed dealer,” which the Dallas Observer has identified as Moon's LDS bookstore, was interested. The price was quite reasonable for its title page, so the owner made a purchase. However, he later heard about the theft in Arizona, viewed an image of its title page online, and realized this was the same title page he had purchased. He called Mrs. Schlie, who called the Mesa, Arizona, police, who visited the Dallas bookseller, and had him call Mr. Linford in Herndon. A few minutes later, detectives were at Linford's door with a search warrant. They found Mrs. Schlie's copy in Mr. Linford's apartment, just as they expected.


While the book will soon be returned to Mrs. Schlie, this story doesn't have an entirely happy ending. The identity of the thief turned out to be particularly heartbreaking for Mrs. Schlie. Jay Linford has been a Mormon bookseller too, and had founded a small business in Palmyra, New York, birthplace of the Mormon faith, printing replicas of important documents. Even sadder, he had worked for Mrs. Schlie at one time, and the two talked regularly on the phone. She had considered Mr. Linford almost like a grandson. He apparently had financial problems arising from his businesses and chose to resolve them on the back of an older lady who had complete faith in him. This is sad for Mrs. Schlie indeed. The loss of trust can be even more painful than the loss of a book, even a very special one.