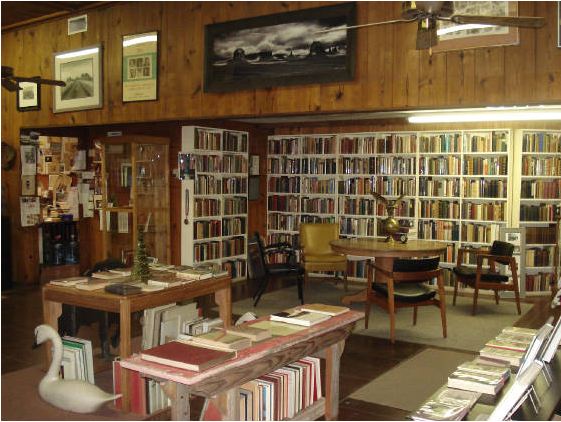 The huge auction at Larry McMurtry's Booked Up bookshop is set to go next month, and we are starting to get a look at the material that will be available. This is no small matter. In fact, it is a very large one, there being something in the area of 300,000 books to be auctioned over two days. Naturally, most will be sold in shelf lots, typically around 200 books per lot. There will also be 100 books sold individually, ones that are favorites of Mr. McMurtry, the bookseller and author whose works have been favorites of readers for most of the last half century.

Welcome to The Last Book Sale, taking place in Archer City, Texas, on August 10 and 11, 2012, from 10:00 a.m. until 7:00 p.m. each day. Larry McMurtry, who has been selling books almost as long as he has been writing them, will be paring down inventory. The bookshop is not closing, but the owner feels it is time to let some of his 450,000 books go. The result is that the books filling three of his four buildings will be sold over the course of those two days in August.


There will be around 1,400 shelf lots, which means it would be quite an undertaking to understand what is available on the day of the auction. Fortunately, the auctioneers, Addison & Sarova, have set up an extended preview time. You will be able to examine the lots starting a week in advance, from Friday, August 3, through Thursday, August 9, except for Sunday the 5th (closed). The buildings are open from 10: a.m. - 5:00 p.m.


This auction promises to provide a memorable weekend for bibliophiles. Larry McMurtry and Booked Up are legends in the field, the shop already drawing regular visitors from all over the world. Add to that an auction of 300,000 books, and a barbecue and concert Friday night, and this figures to be the event of the year, or many years, for those who love books. So, just what is available in an auction of 300,000 books? The easy answer is “everything,” but we asked auctioneer Michael Addison to give us a run down of what to expect. Not surprisingly, he can't give us a listing of all 300,000, but here is the quick tour of the three buildings whose contents will soon be finding new homes.


The auction will begin in Building #4, the largest of the buildings, with almost half of the shelf lots to be sold. The typical lot here will contain 10 shelves, or around 200 books. Most are 20th century printings, including many first editions, some signed. There are a good number of large illustrated books on these shelves. Categories are wide-ranging, including American history, ancient history, anthropology, architecture, art catalogues, books about books, cookbooks, dance, drama, economics and finance, film, journalism, linguistics and reference, medicine, music, mythology, pre-Columbian studies, science, sports, television, travel and transportation. There is also much fiction, but the categories are sufficiently blended that you may find a copy of McMurtry's Cadillac Jack in the travel section. The preview will be great fun for treasure seekers.


Also scattered around Building #4 is general stock. Mr. Addison said his favorites include the modern firsts, the large illustrated books, the selections of books about books, and some dealing with horse racing and bloodlines. However, there will be books not in any of the described categories as well, the number of volumes being so large. As to their value, Mr. Addison said, “If I had to put a general estimate of the retail value contained in each lot, I would say anywhere from $1,000 to $3,000 would be close.” That could come from 20 $100 books, or 100 $20 books. Very few, he estimated, are worth less than $10. Those are retail prices, and auction buyers don't expect to pay retail. “Retail values aside, this is an auction, and we know that bidders are looking for good deals, and they won't be disappointed. The books have to go!”


Next up will be the books in Building #3. This is the smallest of the three, about half the size of Building #4. It contains many 19th century and earlier printings. Literature, history, and fiction will be found here, along with some nice Victorian bindings, and works in translation. Lots here will generally be five or six shelves in total, with 100+ books each. Mr. Addison notes that despite the smaller lot sizes, the retail value is still good, and “the quality is great.” This building also houses an extensive collection of pamphlets, which will be of great interest to those looking for rare, short form, ephemeral material.


Finally comes Building #2. This is where, Mr. Addison says, “the quality of the stock is at its peak.” The size of the lots from this building may vary widely based on the value of the books. They could contain anything from one to eight shelves. Among the subjects found in Building #2 are fiction, poetry, history, auction catalogues, books about antiques, art books, and more. Among the most notable items are some large, illustrated art books and numerous first editions.


In selecting the lots, the auctioneer has attempted to keep values similar. The idea is to have solid value in each lot, while keeping individual lot prices from getting too high. That gives everyone a chance to bid for the books they want. Mr. Addison explains, “Knowing that many of the bidders will be dealers looking for value, our focus was on making each lot an attractive investment in terms of dollars.  I think this will be one of the best opportunities in quite some time for dealers to acquire new and quality stock.” That it certainly will be, as Mr. McMurtry focused on having good books in top condition, the type you would expect of a first rate shop.


While it seems likely that the greatest part of the shelf lots will go to fellow booksellers, 100 books will be offered as single item lots, and these will be ideal for collectors not looking to take home books in the hundreds. Mr. McMurtry selected these 100, not on the basis of being the most expensive or most valuable, but because they were 100 he particularly liked. It is an unexpected group. There are writers you know, such as Thomas Wolfe, Henry James, Winston Churchill, Thomas Carlyle, Leo Tolstoy, Gertrude Stein and Alice B. Toklas. Others may not jump out at you, but perhaps that will spur your interest. Those would include Brother Antoninus, Radhakamal Mukerjee, and Cherry Kearton. And, of course, who doesn't know Alfred Edward A’Courte Hudson's Selected Blood Studies on Swine?


Among the others, for those interested in America's natives, or “Indians,” there is Walter Dyk's important first-hand interview account, A Navajo Autobiography. Or, there is Constantine Rafinesque's Walom Olom, a later edition of the history of the Lenape or Delaware Indians, a document whose authenticity is subject to some dispute. A couple of items highlighted are Leonard Elmore's early western, The Bounty Hunters, the once banned The Ginger Man by J.P. Donleavy, and Alice B. Toklas' Autobiography, a signed copy.


Finally, there is one other group of books. There are many boxes Mr. McMurtry was sent by established and aspiring authors over the years for his review. They will be sold in just a couple of large lots. As Mr. Addison notes, “there is a little of everything here.”


For details about the auction, including how to get there, and where to stay, Addison & Sarova has provided what you need to know on their website. Here is the link: www.addisonsauction.com/thelastbooksale.html.


This link will take you to an earlier article about the sale, including an interview with Mr. McMurtry. Click here.


For the complete list of the “McMurtry 100,” and some introductory remarks from Larry McMurtry, click “next” below to go to the next page.