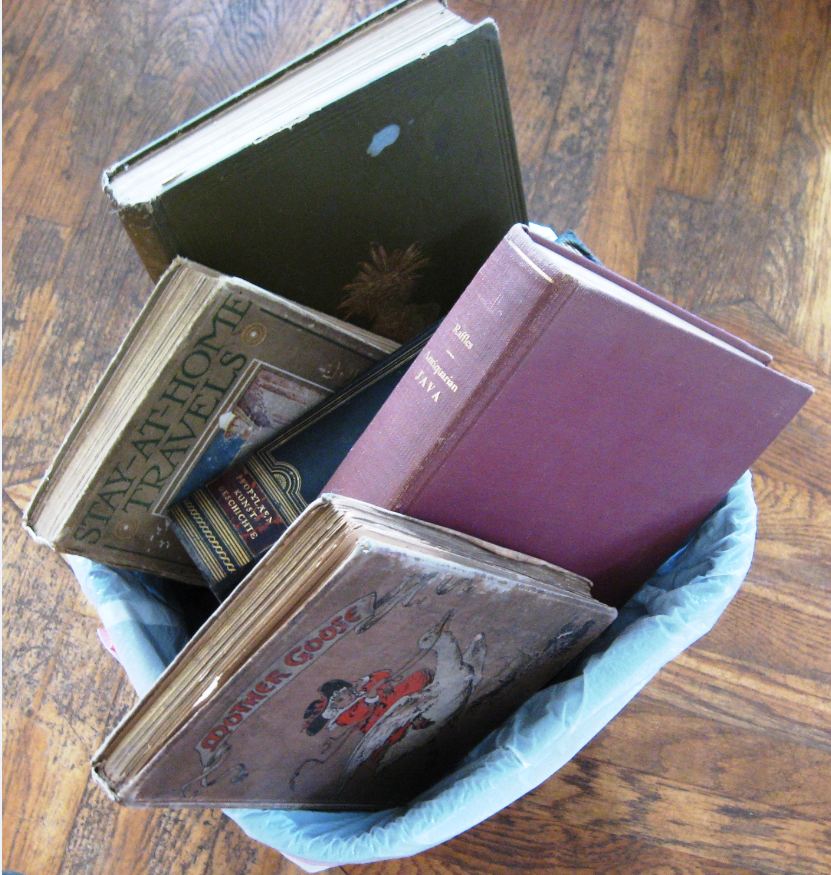 While I was working on this month’s AE story “Seller Beware” I posted some comments to an on-line book listserve describing my recent experience that went something like this: In the 1970s a little New England public library gave away a small collection of items related to Hawaii that had been donated to it at the beginning of the 20th century.


But, when I called them to verify that they had disposed of these items, and they found out the collection has come to market four decades later with a hefty price, suddenly what they disposed of “ to make space” were now valuable items that had been “inadvertently disposed of.”


Within 24 hours of my call they had retained an attorney and plan to try and “recover our materials.” In my email to the listserve I asked if any of my colleagues had run into similar situations?


Here are a series of shocking emails I received on the subject of what happens to books when one prominent academic library doesn’t want them anymore.


The writer is a veteran staffer at a big name American state university library. The text has been lightly edited to protect the identity of the whistle-blower.


“I know of one institutional library so afraid of this sort of thing they used to make midnight runs to "de-acquisition by dumpster" all the gifts and duplicates they culled in triple sealed boxes. Really amazing stuff, too!


Enough to make the collector or dealer cry.


Wouldn't even consider selling the material (I naively tried to arrange a third-party sale) lest the donor someday find out--which I guess is exactly what had happened just prior to this knee-jerk policy.


Better to accept the gift--and covertly trash it-- than decline or sell it.


To be fair -- the institution later reversed course and began "charitably" sending some boxes over-seas to any place conveniently far away enough they'd not be bothered for an explanation (like Hawaii? LOL)  This earned them "green points," and more importantly, I think, saved them tipping fees at the landfill.”

Tell me more I responded, and soon received this reply:


I was newly hired at XYZ University Library back in the year XXXX and I was stationed near the area where the gifts were sorted.


I would often browse the trucks of new gifts and donations that were awaiting selector decisions (catalog or toss) and since I had an appreciation for the material they sometimes consulted me.


I started asking questions about what became of the material the library culled and didn't want?


I was told that if it was bought with collection development money (state money) or was in any way identifiable as a gift from a donor it was to be destroyed, because they couldn't sell it or give it away --- the dean had recently been chewed out by a wealthy donor who had found a book-plated book s/he had donated at the local book sale.


Throw Them Out – Just In Case

This translated for a good while into a policy to throw most books out - just in case.


The books were boxed in unmarked boxes until trash day, and then disposed of at night and staff was forbidden to fish them out.


Still makes me angry, though nowadays, more boxes are thankfully going to the XYZ book sale (new administration). Even so, there are still stacks of unmarked boxes waiting for the trash that I try not to think about every time I pass by.


I know that all books weeded from the stacks continue to be destroyed and they actually go so far as to physically destroy them first by having student workers rip the covers off!


Librarians in my experience are not collectors.


And duplicates?  They never checked for condition -- they'd throw out a mint first edition or vintage paperback if they had a ratty later printing already on the shelf.

I transferred to another department and have been making a valiant attempt, albeit a quiet lonely one, to upgrade the collection in this regard by paying attention to printings, states, and condition whenever I receive a choice book that is a duplicate.