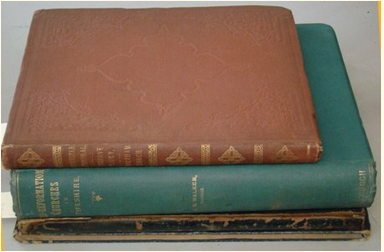 An intense and very defined collection of English Church Architecture books, some of them folios with plates, will be sold without reserve at Carlsen Gallery in Freehold, New York on June 3rd.  Many of the most desirable items date to the first half of the 19th century.  Altogether there are 59 lots containing 448 books, the material one of the collections of the late Charles Grant Ellis of Kingston, New York, a collector who was also an expert on ancient oriental carpets.

This material is focused on English church history, a narrow subject rarely found in such a concentration.  For the specialist, be they a collector, dealer or institution, this is an unusual possibility, the chance to acquire hundreds of volumes on the subject for what may potentially be very appealing prices.


While a few lots contain only a few volumes the average lot contains 8 books.  All the lots, together, is a deep and detailed personal collection.  The material will probably be purchased by dealers but a collector could from scratch, in a single sitting acquire, reassemble the collection for their personal use.  The condition of the material, which is generally fair, has the feel of a working or research library.


Here are some examples of the lots.


Lot 604.  Sections and Specimens of the Architecture & Ornaments … St. Stephen’s Chapel.  The most recent copy at auction, in the AED, is 1967.  Estimated current value $544.  + another dozen books