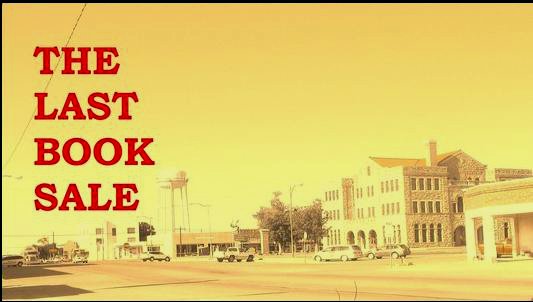 Keep your eyes open for an enormous book auction in a very small town this summer. On August 10 and 11, Addison & Sarova Auctioneers will be conducting an on-site sale of inventory from Larry McMurtry's Booked Up store in Archer City, Texas. Before anyone gets disheartened over Mr. McMurtry leaving the business, he isn't. As he explains, he is “just downsizing.” At the age of 75, he believes it's time to share the stock, although even after reducing it by two-thirds, he will still have one of the larger inventories in the book trade.

Currently, the Booked Up inventory is housed in four large buildings. The first building contains about 140,000 titles, the remaining three buildings around 100,000 each. It is only the stock in buildings 2-4 that will be put up for sale. Mr. McMurtry will continue to operate the business from the main location.


Mr. McMurtry is almost as much of a legend in the book selling field as he is among the reading and viewing public for his novels and screenplays. The auction's title, The Last Book Sale, is a play on the overlapping careers, reminiscent of The Last Picture Show, one of Mr. McMurtry's novels set in “Thalia,” a town not unlike Archer City. Had Mr. McMurtry returned to Thalia/Archer City a bit sooner, the young folk never would have wanted to leave. There would have been plenty of jobs for Duane and Sonny managing those 450,000 titles. Jacy, still looking beautiful as Cybil Shepherd, would be helping customers find the perfect book.


Larry McMurtry has been selling books almost as long as he has been writing them. Forty-one years, he points out. The original store was in Georgetown, but in 1986, he opened up a second store in Archer City, his hometown. Later, the Georgetown store closed. He explains that operating a book shop in Georgetown had become too costly. It's no surprise property is less expensive in Archer City.


Now, a small, rural town in North Texas does not sound like an ideal location for a book store, particularly one handling close to half a million volumes. The closest city, as his readers will recall, is Wichita Falls. Since Booked Up holds four to five times as many books as the population of Wichita Falls, a wider audience than that was always required. Fortunately, he points out, “people like to travel.” Travel they do. Customers come from all across America, Europe, and as far away as Australia and even China. Some are regulars. Undoubtedly, it is Mr. McMurtry's reputation that plays the major role in drawing customers from so far, though he gives the credit to his “long-time great staff.”


A few years back, there were reports on the newswires that Mr. McMurtry was closing the Archer City store. The story was that competition from the online sites was making it impossible to run a traditional bookstore. He said that he considered the idea for “about 20 minutes,” but was never serious about locking the doors. He explains, “I don't pay much attention to Amazon or AbeBooks.” His focus is on traditional bookselling, and he remains committed to the concept. In fact, it is his hope that many of the large lots of books offered at his sale find their way into the hands of young booksellers. “Young dealers have a chance to get some good stock.” He purchased the inventory of 26 bookshops and hundreds of private collections along the way, and is hopeful he can provide a starting point for some of the next generation. He believes this sale will offer an indication of how committed that next generation of booksellers is.


As with competition from online sellers, Mr. McMurtry is not terrible concerned about competition from electronic books either. They have their place, but he does not believe they will replace the printed word.


With some 300,000 – 350,000 books going up for auction, most, naturally, will be sold as shelf lots. This explains why Mr. McMurtry considers the auction a great opportunity for young booksellers. Asked whether most books are collectible or reading copies, he emphatically states, “most of what we have is collectible.” This is not to say that it is all expensive material too good for reading. No one has 350,000 books appropriate for the rare book rooms. What he means is that the condition of his books, and the interest of their content, be they more recent or old, is at a high level. “We purge twice a year,” he explains, removing books whose condition or interest is unsuitable for the shop. It is not so much that every book is a great book as it is that they make a point not to have “bad” books. “We are picky.”


In terms of fields, with the quantity being offered, you would expect a wide variety of material to be available. “We have good holdings in just about anything you want to name,” he points out.


The almost half a million books at the store are not all of the books Larry McMurtry owns. He also has a personal collection, which he estimates at around 28,000 volumes. It represents 55 years of collecting. He describes it as a “general humanistic library,” with a good deal of reference material. “I have used it. It educates me,” he explains. Mr. McMurtry has received many of his books in his role as a reviewer over the years. As to what he plans long term for his personal collection, that is not a decision he is ready to make at this time.


Mr. McMurtry has set aside just 100 books to be auctioned off as individual lots. These are not necessarily the 100 “best,” if best means the most expensive. They are just a sampling of items he finds interesting, available for those not looking to purchase entire shelves. He rejected the idea of pulling the best books off of the shelves to be sold separately. The plan is to make sure the shelf lots contain plenty of valuable books.


For those interested in what promises to be one of the greatest events in the book selling field in years, Addison & Sarova is providing detailed information on their website. While the sale itself will be held on Friday and Saturday, August 10 and 11, viewing begins on Friday, August 3. Books can be viewed everyday except Sunday, from 10:00 a.m. - 5:00 p.m., until the sale. Those interested in the shelf lots should stop by in advance to see what books are on those shelves.


The sale itself promises to be an exciting event for all. Snacks and drinks will be provided to bidders during the sale (Texas is quite warm in August), and there will be a one-hour break for lunch. The auction will be conducted from 10:00 a.m. - 7:00 p.m. each day. On Friday (August 10), approximately 930 lots will be sold, including the “McMurtry 100” single book lots. On Saturday, another 615 shelf lots will be sold, along with a large sign. That is the Goodspeed's sign. Years ago, Mr. McMurtry picked up the sign that hung on the legendary Goodspeed's shop in Boston. Goodspeed's career roughly paralleled the Twentieth Century.


The Addison & Sarova website also provides information about which airports to use (Wichita Falls is about 25 minutes away, Dallas 2 hours), where to stay, where to rent a car, even where to rent a truck.


The link to “The Last Book Sale” on the Addison & Sarova website is found here: addisonsauction.com/thelastbooksale.html.