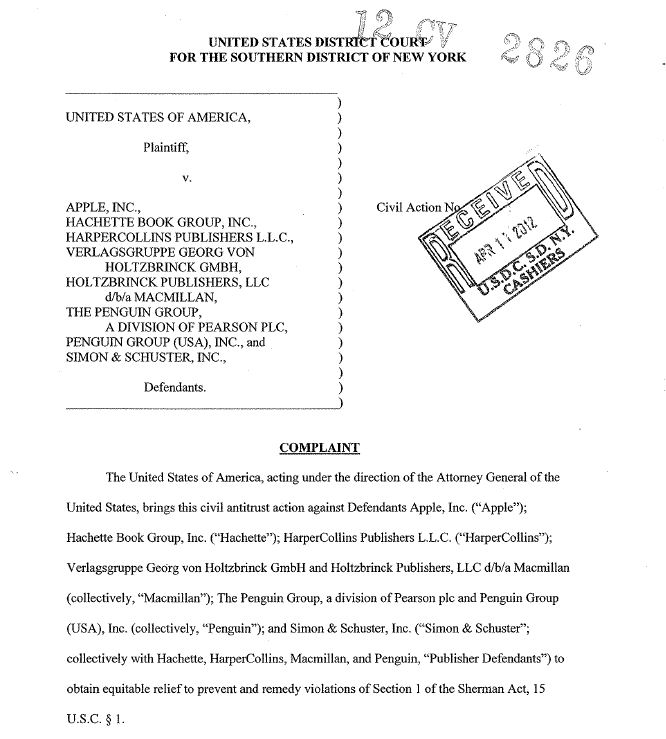 The Department of Justice sued Apple and five publishers for price fixing e-books.

The long rumored lawsuit by the U.S. Department of Justice against the world's most valuable company, Apple, and five book publishers for conspiracy to fix prices, was finally filed last month. The basic claim is that the companies conspired to force Amazon to raise its prices on electronic books. As a result, books that generally were being sold for $9.99 each had their prices raised to $12.99 or $14.99.

When Amazon began offering e-books in 2007, it offered them at a price substantially lower than printed copies. Their $9.99 price left the company little room for profit. Sometimes, the price resulted in a loss. However, Amazon was more concerned with building a business than making a short-term profit. The low book prices helped spur sales of its e-book reader, the Kindle, and made Amazon the overwhelming choice for those who purchased e-books. Amazon held an estimated 90% of the market.


According to the Department of Justice complaint, the five publishers (Hachette, HarperCollins, MacMillan, Penguin, and Simon & Schuster) “feared that lower retail prices for e-books might lead eventually to lower wholesale prices for e-books, lower prices for print books, and other consequences the publishers hoped to avoid.” Each feared consumers would come to expect a $9.99 price point, and wanted to disabuse them of such expectations as soon as possible. However, they “concluded that unilateral efforts to move Amazon away from its practice of offering low retail prices would not work, and they thereafter conspired to raise retail e-book prices and to otherwise limit competition in the sale of e-books.”


Just as the publishers were facing this price conundrum, Apple let it be known that it would be releasing its tablet computer, the iPad, which doubles as an electronic reader, and was considering selling e-books too. According to the complaint, Apple believed it could “trounce Amazon by opening up its own e-book store.” However, Apple was not looking for loss leaders or low margin businesses. Anyone who has ever purchased an Apple product realizes this. So, when Apple and the publishers discussed the former's interest in selling their e-books, “Apple learned that the Publisher Defendants shared a common objective with Apple to limit e-book retail price competition.” The parties also realized that the publishers wanted the price of e-books to be substantially higher than $9.99. As a result of these discussion, the DOJ continues, “Defendants reached an agreement whereby retail price competition would cease, retail e-book prices would increase significantly, and Apple would be guaranteed a 30% 'commission' on each e-book it sold.”


The DOJ then claims the parties, to effectuate their price fixing conspiracy, changed the model by which electronic books were sold. Instead of the “wholesale model,” by which publishers sold their e-books at a wholesale price, and the retailers sold them for whatever they wished, the publishers adopted an “agency model.” Under this model, the retailers acted as “agents” for the publishers. The publishers set the price, and their “agents,” the retailers, all had to sell their books for the same set price. There would be no price competition. The retailers would receive a fixed percentage commission on each e-book they sold. The publishers would get their wish – higher retail prices for e-books – and Apple would have its demand fulfilled, that no one would be permitted to undercut their retail price. Apple bought into this plan, according to the complaint, knowing it “would result in higher prices to consumers.”


The complaint concludes that once the publishers reached their agency agreement with Apple, the publishers limited price competition among themselves, and e-books that previously sold for $9.99 now sold for $12.99 and $14.99. As a result, consumers have been forced “to pay tens of millions of dollars more for e-books than they otherwise would have paid.” The DOJ asked the court to declare this practice illegal and prevent further “injury to consumers” by the parties.


The DOJ cites numerous meetings and telephone conversations by the publishers, both among themselves and with Apple, during which the scheme was allegedly hatched. Within a three day period in January 2010, all five publishers signed agreements with Apple, and the agency agreements all went into effect on the same day, April 3, 2010, the release date of the iPad.


When Macmillan led the way in enforcing the agency model on Amazon, the latter responded by discontinuing the sale of their books. However, when the other four backed up Macmillan with the same terms, the complaint says Amazon was forced to back down. The five represented almost half of Amazon's e-book business. The publishers had succeeded in enforcing the terms of its agreement with Apple on Amazon. Amazon had to raise prices to consumers.


Almost immediately after filing the claim, the Department of Justice announced that three of the publishers – Hachette, HarperCollins, and Simon & Schuster – had reached a settlement with them. The settlement would require terminating their agreements with Apple and refraining from further limiting the prices at which retailers may sell their e-books. However, Apple and the other two publishers have indicated they plan to fight the charges. Apple described the charges as “simply not true,” and says, to the contrary, they have “broken Amazon's monopolistic grip” on the e-book field. It compared the publishers' setting the prices on their iBookstore to “apps” developers setting their prices on Apple's App Store.


Meanwhile, the parties are facing litigation in several other venues. Fifteen states have reportedly already reached an agreement with the three publishers which will require a substantial cash payment from them. A private class action suit may affect residents of other states. The European Commission is investigating the claims, and reportedly has received settlement offers from Apple and four of the publishers (Penguin being the lone holdout). A class action suit has been brought in Canada, and Australia is reportedly considering action.