The Latest Million Dollar Work on Paper – A Baseball Card 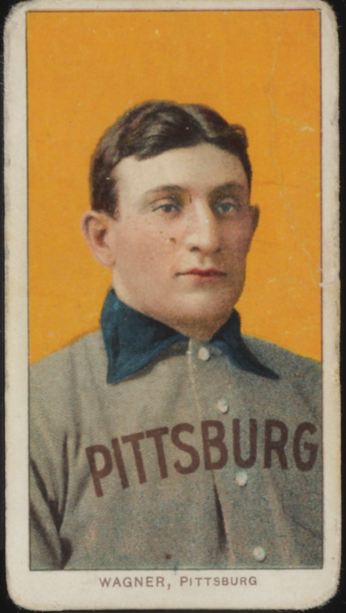 He was not a dominant home run hitter like Babe Ruth. He was never as ornery as Ty Cobb. He was never called “Mr. October” like Reggie Jackson, did not collect as many hits as Pete Rose or home runs as Hank Aaron. His name today is probably remembered only by baseball aficionados. Nevertheless, he is the king of baseball cards. If you could have just one baseball card, it would be a Honus Wagner, one published by the American Tobacco Company between 1909 and 1911. If nothing else, you could sell it and buy all of the other cards you ever wanted.

Honus Wagner is not as well remembered today as those other names because he played so long ago. It probably doesn't help that he played virtually his entire career in Pittsburgh either. Johannes Peter “Honus” Wagner dominated his era, which ran from the late 19th century until 1917, and would have been one of the greatest to play the game in any era. He won eight batting titles, and is generally recognized as the greatest shortstop to play the game, a critical defensive position not noted for great hitters. Still, it is not his greatness that makes a Honus Wagner card more valuable than a Ruth or a Cobb. It is its rarity, though even that may sound odd to a book collector. It isn't all that rare. Its rarity is more akin to a Shakespeare First Folio, not overwhelmingly rare, but extremely desirable. Two hundred of the baseball cards were printed, and of them, around 60 are known to still exist. Obviously, a lot more than 60 people want them. How else to explain it selling for $1.2 million, a relatively “cheap” price reflecting its less than perfect condition?


The print run of 200 was short for cards inserted in cigarette packs. American Tobacco printed some up without securing Wagner's permission. When asked, he declined. Some have suggested Wagner did not want to encourage smoking, but as a tobacco chewer, like most ballplayers of his era, it seems dubious that he was making a statement about good health. More likely, he was not offered sufficient compensation by American Tobacco. Wagner had endorsed various products in the past, so his reluctance seems more likely attributable to good business sense. And, while Wagner had good business sense, and was one of the highest paid ballplayers of his era, in his entire career he did not earn as much as the Houston seller made from selling this one, 1 1/2” x 2 1/2” Honus Wagner baseball card. Such is the difference between investors and working stiffs.


Only five known Honus Wagner cards are graded higher than the one sold at Goodwin's, with several others being of comparable condition. One can only imagine what one of those graded even higher would command. Actually, one doesn't have to imagine. The highest rated Honus Wagner card known to exist was sold in 2011 to Ken Kendrick, owner of the Arizona Diamondbacks baseball team. Its price was $2.8 million. That card was purchased 20 years earlier by hockey legend Wayne Gretzky and the then owner of the Los Angeles Kings for $451,000. In hindsight, that price was a bargain.


While nothing can touch a Honus Wagner card, many other baseball cards were sold at the Goodwin auction for outstanding prices. Runner-up was a 1909 Eddie Plank card, which sold for $330,000. Plank played in the same era as Wagner, but he was a pitcher, racking up 326 wins (11th all time) during his career.


This auction is just another reminder of the growth in pricing of non-traditional works on paper, ephemeral printed works often of a more recent vintage than antiquarian books. These are items with which recent generations grew up. Lately, we have seen comic books exceed $1 million in price at auction. Comic books were a part of the youthful lives of the generation that today, at its wealthiest, can afford to pay these prices. The same generation that read comic books as children, flipped baseball cards with their friends. It's no wonder they are still flipping for baseball cards, though in a different sense. Those who collect and conduct business in the works on paper field should take notice. Great value can now be found in ephemeral paper items that a few decades ago would have been considered insignificant.