Chronicle of a “Fort-Rare” Book... 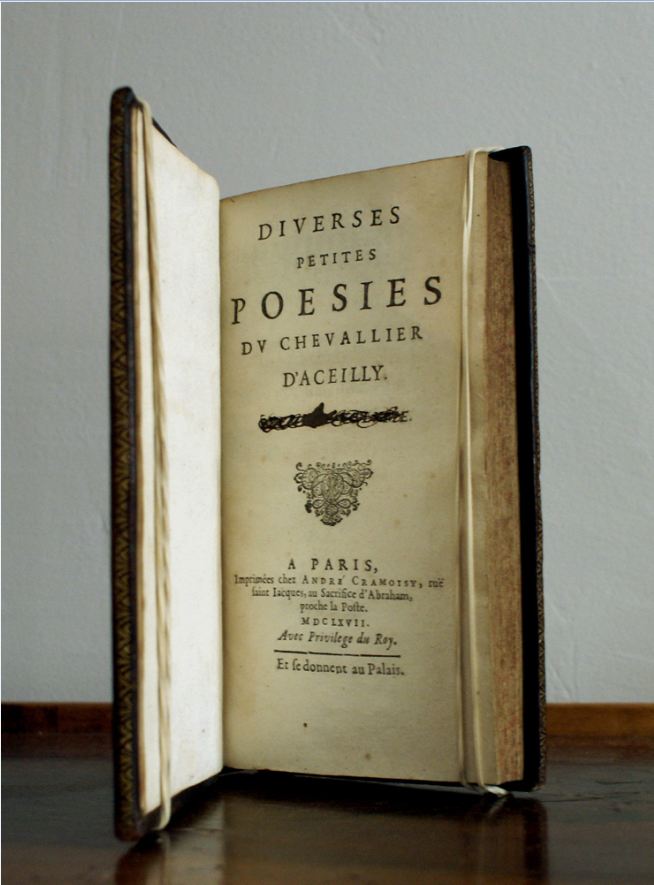 Voltaire wrote that the discovery of the New World was probably the most important event of our globe, and he would surely say that the internet revolution equals it. This New virtual World affects every aspect of our lives – including the most important one, tracking down old books. Thanks to digitalized libraries, free access to the catalogues of booksellers from all over the world and the descriptions of auction sales, one hardly needs to leave his home in order to conduct some research on a specific book. This I experienced lately, trying to “corner” a French book of poetry said to be “fort-rare”, very rare, and happening to be a complex riddle in itself. Ready... Google... Sent.


Rare, scare, very scarce… These adjectives often follow a book description but what does it really mean (apart from the fact that it might be expensive, I mean) ? It is well-known, and widely deplored, that almost no records have been kept of the amount of books printed in the 17th or 18th century. It is said that 4,000 copies of the Encyclopédie of D’Alembert were printed but we have no clue of the figures for a vast majority of books – mostly regarding those of a relative popularity like the one I am about to talk : Diverses Petites Poésies du Chevalier d’Aceilly. The first edition, Cramoisy, 1667, 1 vol. in-12, was noted as very scarce in David Clément’s “hard to find books” listing, as soon as 1750 : “ Mr De Cailly had his poems printed under the anagram of D’Aceilly. They are short and quite nice. This book has become fort-rare (very rare) but was reprinted with the travel of Mr Bachaumont and La Chapelle, Amsterdam – 1708.” Three years later, the German catalogue established by Widekind even stated that this book was “impossible to find”. When Charles Nodier, a very famous French writer and publisher of the 19th century , decided to reprint it, he couldn’t find a copy of this first edition, as confessed in the preface of his 1825 edition (Paris, Delangle). He probably copied the poems from “ the excellent Recueil de Pièces Choisies by La Monnoye (La Haye, 1714 – 2 vol. In-12).” He later found a few copies, as testified in a handwritten note he left behind : “ Why is the first edition of these charming poems, the rarest of all our little classics ? Here is the very little known reason : De Cailly who had a lot of copies (...) wrote Premier Volume (Volume the first) on the frontispiece – nothing could have been more disastrous for the book [most buyers probably thought the book was incomplete as such, editor’s note]. At the bottom of the same frontispiece, he added Et se donnent au Palais (Given at Le Palais); everybody took his word for it. People refused to give money for what was given away. Realizing his mistake, D’Aceilly tried to correct it but ended up doing another one. He had all the frontispieces of his books scrapped, which only brought disgrace to the books that were pulp soon after. (...) In forty years’ time, I have come across 5 copies only, two with their frontispieces, and three without them. I had never seen this first edition when I put out mine.” Nodier had apparently taken this book and its author out of darkness. But when a copy of the fort-rare first edition recently appeared on the auction sales website Ebay.fr, all became... very blurry.


Rare does not mean good. Many books have become rare just because they were not good – they did not sell, so only a few copies have been around. The poems of D’Aceilly are not just fort-rares, they are also “ fort-good”. I discovered them a few years ago, as I was absolutely not looking for them. The travel book Voyage de La Chapelle is a best-seller of the 17th century, relating a travel to the French region of Provence. Described as an entertaining reading, it was gently criticized as over-estimated by Voltaire. Voltaire is not always right so I decided to make my own opinion. A humble edition, Amsterdam, 1751, in-12, a very nice copy, cost me 40 euros. Of the travel of Mr La Chapelle, I can not say much, I forgot about it – Voltaire is always right. But I was very impressed by the Diverses Poésies du Chevalier D’Aceilly added to the voyage (for some reason, from the edition of 1708 onwards, the poems of D’Aceilly have regularly been added to this travel.). I had never heard about the author either; but his poems soon found their way to my night stand where they remained for weeks. “D’Aceilly wit soon made him famous both in town and at Court and he made friends with a lot of persons of merit, wrote Briasson in his Bibliothèque Poétique (Paris, 1745 – 4 vol. in-12). On the recommandation of Mr Colbert, Louis XIV awarded him the cross of the Knights of Saint Michel. Of his numerous epigrams only a few are mediocre and the vast majority are remarkable by their naïve style. Satisfied with his condition, he was running away from what others would ardently seek. Happy was he to favour a peaceful and confortable life over pride and ambition ! He was from one of the most dignified families of Orléans, which is still proud of his ancestor. No one knows the exact date of his death.” Nodier said he died in 1673, aged 69. “The witty remarks of this poet, continued Nodier in his preface, sometimes a bit rude, remind us of the libertine philosophy all classical ages have permitted, but are never obscene. To end up, he fights ridiculousness with acridity but never attacks people...” In his own words, D’Aceilly explained he did not intend to print his works : “ I dared not to submit my poems to universal judgement and it took me years to make up my mind.” The book was printed with care, using a different headpiece for each page and some simple but very nice initial letters. D’Aceilly’s verses are well written, their rythms are stirring. He apllied the French “ préciosité ”, or courtesy, of the time to some ordinary (Nodier said “rude”) topics. Here are four epigrams of his (for all I know, D’Aceilly has never been translated into English, which is a shame, so I did translate those myself, caring not so much about rimes nor feet) :

When you talk about Lanssay,

And I have nothing to say,

Don’t be offended as you seem,

That’s all the good I know of him.

To Luc did give the pox,

Janeton charged him for sure,

Her teeth so bright has kept,

Most of the time they’ve spent

Hidden in a casket.

When mother quarrels you,

Vile girl, said she to you,

You are no good,

Her words are rude,

Your mother knows you well.