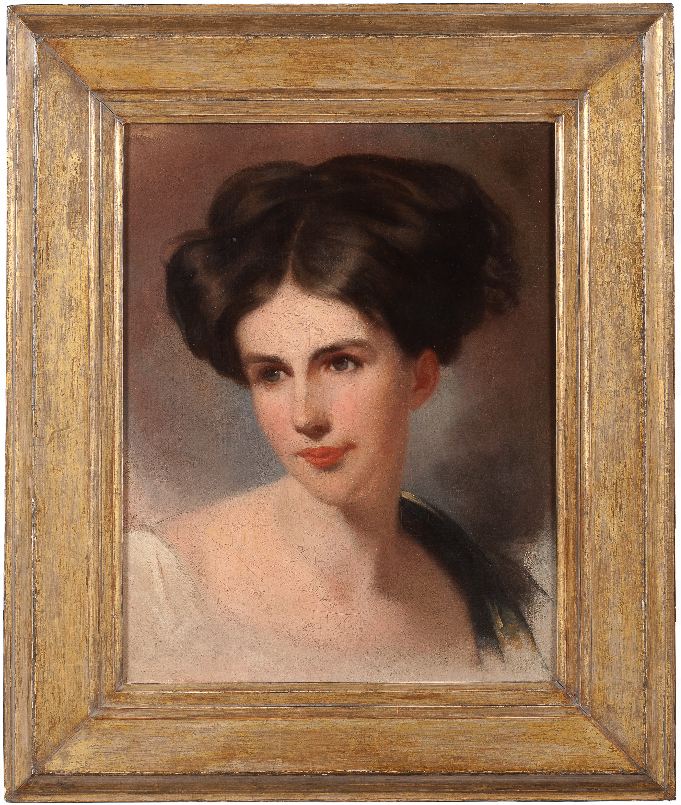 On a bright sunny day in 1831, or perhaps a cloudy one, we do not know, Benjamin and Maria Gratz sat for portraits. The painter was Thomas Sully, one of the foremost American portrait artists of the 19th century. He painted many notables, including Thomas Jefferson, Lafayette, and Queen Victoria. If the Gratzs were not quite as well known as those individuals, they were nonetheless part of a prominent and remarkable family.

Benjamin's father, Michael, and his uncle were Jewish immigrants to America before the Revolution. They settled in Philadelphia, where they developed successful mercantile and business interests. The brothers were involved early in the patriot cause. They boycotted British merchandise subject to the hated Stamp Act of 1765, and by the time revolution broke out, they swore their allegiance to the new, would-be nation. After the war, the family's business interests would continue to grow and prosper. Benjamin was one of Michael's 12 children, most of whom became involved in the Philadelphia businesses.


Benjamin was an exception. Michael Gratz had purchased a sizable amount of land on the frontier, and it was Benjamin who went off to the wilderness to manage it. He settled in Lexington, Kentucky, and quickly became one of the most important of community leaders. Among his close ties was the orator and “Great Compromiser,” Kentucky's Henry Clay (one of Benjamin's daughters later married Henry Clay's grandson). At some point, Benjamin met and married Maria Gist, from a prominent family herself. It was reportedly a most successful and loving marriage, and the couple was beloved by many of the leaders of their community.


In 1831, on a visit to Philadelphia, the Gratzs discovered that Benjamin's sister, Rebecca, had had her portrait painted by Sully. Rebecca Gratz is a story herself. She devoted her life to worthy causes. She was very active in providing aid for poor women and children, and founding an orphanage in Philadelphia (Benjamin would do the same in Lexington). She was also active in various Jewish causes, for which she is still known today. It is said that she was the model for Rebecca in Ivanhoe, her attributes conveyed to author Walter Scott by their mutual friend, Washington Irving. Benjamin and Maria liked the painting of Rebecca, and commissioned Sully to paint theirs as well. When the visit ended, they returned to Lexington, portraits in hand.


What exactly happened to the portraits over the years is uncertain, though they remained in the family. Maria died in 1841, while Benjamin later remarried and lived for many more years. Somewhere along the way, their portraits became separated.


Fast forward a century. Dr. A.S.W. Rosenbach, the noted 20th century bookseller, and his brother, Philip, collected Gratz family items, books and manuscripts, naturally, along with furniture, silver, ceramics, and portraits. They were also descendants of the Gratz family. After the Rosenbach brothers died, their Gratz family collection was one of the many items left to the Rosenbach Museum and Library. Since then, descendants of the original family have left more heirlooms to the Rosenbach. One of those gifts was the portrait of Benjamin Gratz, along with a second Sully portrait of Rebecca, bequeathed in 1970 by a granddaughter from his second wife, Henrietta Gratz Clay. Then, in 1984, the museum was notified by another descendant, Fanny Gratz, that there was also a portrait of Maria, though she knew not where it was. All she had was a photograph of what she called a “crayon copy” of the original portrait. Despite scouring auction records and other sources over the years, Rosenbach curators were never able to locate the missing portrait of Maria Gratz.


In June of 2011, still with no leads, Rosenbach curator Judith Guston tried a “shot in the dark.” She asked Susan Sklaroff of the Rebecca Gratz & 19th-Century America blog to post a request for readers to search their attics, friends' homes, and libraries to see if they could locate the painting. To everyone's surprise, she received a call just three weeks later. It came from Maria Gratz Roberts, a great-great-great granddaughter of Benjamin and Maria. It had been sitting in her house for decades. She had no idea anyone was looking for it. Evidently, the portraits must have at some point, probably early on, been separated, as one came to the Rosenbach through the family of Maria, while the others came through the family of Benjamin's second wife.


Though she had lived with the painting all of her life, Maria Gratz Roberts believed it belonged at the Rosenbach with the other portraits and Gratz family heirlooms. She donated the painting, along with a chair Benjamin had brought home from Philadelphia, to the Rosenbach. Once again, Benjamin and Maria are together, at least in portrait. It's a happy ending to a long tale. Dr. Rosenbach, something of a matchmaker himself, between books and their collectors, would undoubtedly be pleased. Families belong together.