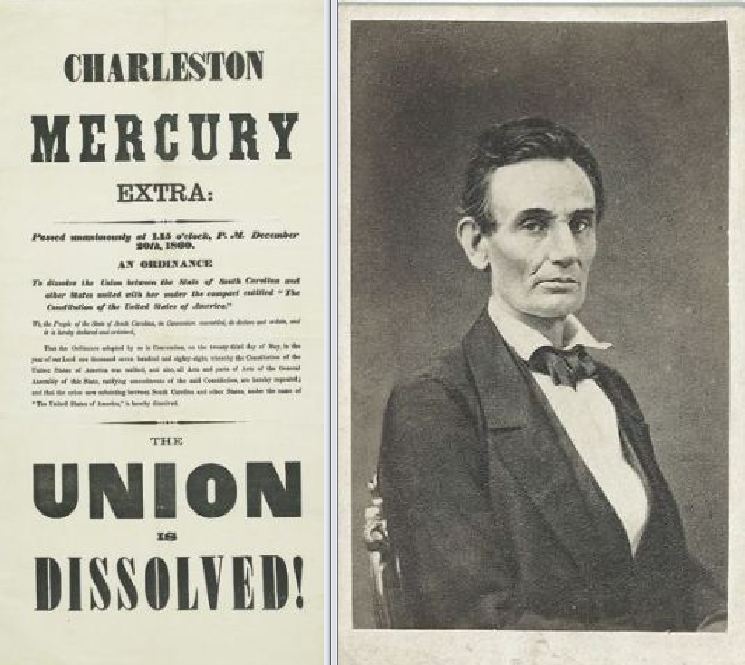 Union Dissolved, not quite, and a beardless Lincoln (1859).

The second auction of material from the collection of Eric Caren is scheduled to take place at Swann Galleries in New York on March 15. Mr. Caren is the notable collector who used a broad-based brush in developing his collection. His aim was to document every important event in history from the 16th century through the 1970s on paper. This auction contains documents dating from 1567-1988. The collection includes books, manuscripts, newspapers, autographs, photographs, posters and ephemera. The bulk of the material can be classified as Americana, though there are lots pertaining to English history, and a few from continental Europe and Africa as well. The appropriate title for this wide-ranging auction is How History Unfolds on Paper.

At the top of the estimates is Admiranda Narratio Fida Tamen, de Commodis et Incolarum Ritibus Virginiae, a 1590 first Latin edition of Theodor de Bry's description of Virginia, promoting the doomed colony at Roanoke. It is estimated at $60,000-$90,000. A first edition of A Briefe Relation of the Discovery and Plantation of New England, published in 1622, is estimated at $40,000-$60,000.


More recently, there are files of press photographs, captions on the back, covering film stars, baseball, and major news events. Posters from the 1960s and 1970s document the psychedelic era and the Vietnam War protests. The most recent item is a signed campaign poster from Jesse Jackson's 1988 presidential campaign.


The auction will take place on Thursday March 15, starting at 1:30 p.m. The items will be on display the preceding Saturday, and Monday through Wednesday. For more information on the sale, or to obtain a catalogue, you may visit Swann's online at www.swanngalleries.com.


To view the material in this auction, click on the following link, and then select the link for Swann Galleries sale number 2273: click here.