A New Book from David Batterham Recalls 35 Years Among Booksellers 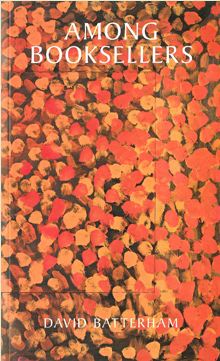 For those who sell (or buy) books, and are fascinated by others' adventures in the book trade, a new title was recently published by the English bookseller David Batterham. Though Mr. Batterham obviously has some well-heeled customers in England, he seems to have operated under the radar for much of his career. He sold via catalogue, rather than having a shop, common today but not so much so decades ago. An internet search for him reveals virtually nothing beyond the couple of books he has written. Indeed, he doesn't maintain a website, something common to every important (and unimportant) bookseller before 1990, but most unusual today. Mr. Batterham has been in the trade for some 40 years now, and evidently holds to traditional ways.

His book is entitled Among Booksellers; Tales told in Letters to Howard Hodgkin. Howard Hodgkin is an artist and long time friend of Mr. Batterham. Over 35 years of travelling the world buying books, Mr. Batterham wrote letters back home to his friend describing his adventures. According to the publisher, “He was looking for Trade Catalogues, Fashion Magazines and other illustrated journals but his colleagues interest him almost as much, seen in their homes and shops. The visitable bookseller, a vanishing breed, is here immortalised. Part diary, part memoir, some anecdotes and reflections; intended to amuse rather than inform.” We should note here in conjunction with these publisher's comments that this book is self published.


While Mr. Batterham did not maintain a shop, interestingly he primarily purchased from them. He would travel the world, including France, Spain, Denmark, Holland, Finland, and America, meeting with booksellers. He understood what books could be sold for higher prices to his customers in England, and would bring those home. The result of this type of purchasing was that he came to know many booksellers of the day. His book, being a collection of contemporary private letters, rather than later recollections, reveals his observations of his fellow booksellers more accurately and honestly than a filtered later account might offer.


According to a recent review in The Guardian by Simon Hoggart, “It is a strange book, but beguiling – you meet the weird people who inhabit the world of antique bookselling. And there are old crones serving terrible meals in French hotels, crab-like people who try to cheat him but halve their prices when he insists, the discovery of amazing volumes he can sell in London for 10 times what he paid. I expected to toss it aside, but couldn't put it down.”


A quote from writer and critic Margaret Drabble, provided by the publisher, states that the book is, “An extraordinary picture of a strange eccentric world of dealing and collecting with its chance encounters, crazed characters, its obsessions and its loneliness.” Another publisher's quote, “the funniest book I have read in years,” from Richard Burton confuses me a bit. I know of two Richard Burtons, the famed English explorer, and the noted British actor. Both have been dead for a very long time. Apparently, there are a couple of contemporary Richard Burtons involved with writing and I guess the quote comes from one of them.


If you would like to obtain a copy of this book, and it is hard to imagine why anyone involved in the book trade would not, it may be ordered directly from bookseller David Batterham, at 36 Alexander St., London, UK W2 5NU. The price is £9.95. Or, you might want to contact him first for shipping information at david.batterham@virgin.net. Special terms are available on orders of four or more copies if you would like to resell them. In the U.S., you may also purchase it from Oak Knoll Books for £14.50 (including shipping), or if you prefer to use the local currency, $17.50. Oak Knoll may be found online at www.oakknoll.com or via email at oakknoll@oakknoll.com.