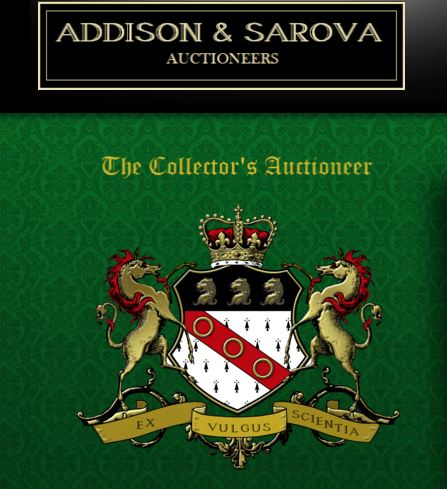 The American Southeast will soon have its own book auction house with the opening of Addison & Sarova. Their first auction will be held later this month. The auctions will be held in historic Macon, Georgia, a quick 45 minutes down I-75 from Atlanta, and with interstate access to Florida, the Carolinas, and other points throughout the South. Book auctions are common in the Northeast, along the belt from Boston to Washington, but in the South, books have been buried among antiques and a myriad of other offerings at the typical general auction.

The owner and operator of Addison & Sarova is Michael Addison, a bookseller and auctioneer, and all-around bibliophile of longstanding. Mr. Addison was an English literature major in college who made his way to book selling the typical way – first as a collector. Ten years ago, he turned his passion into a profession by entering the book trade. Addison not only sold books, but provided services as a bookbinder, conservator and restorer of old books. Like other booksellers, Addison would look to auctions both as a source of material of interest for his customers, and as means of making quick sales when a little extra cash flow was needed. However, as he explains, “the lack of a specialized auction house in the Southeast was frustrating. We have many auction houses, but they deal mostly with general antiques and estates. There were no rare book auctions that I could find, so I would have to travel to New York or California if I wanted to attend an auction. I would have to rely upon absentee bidding or online bidding most of the time.”


Meanwhile, Mr. Addison said he was often approached by customers wanting to sell their books. He set up a separate website to assist sellers, providing value estimates based on auction records. Where logical for his business, he might buy the books, but at other times he would refer the owners to an appropriate auction house. This meant either shipping the books to a location far away, or mixing them in with other goods in a general auction. To Mr. Addison, the need was obvious. With his own years of experience with auctions, and generous advice and help from some specialists at other houses, he made the leap to opening the South's first dedicated book auction house.


The first auction will be held on Saturday, March 17, from 12:00 - 4:00 pm. There will be a preview on Friday March 16 from 10:00 am – 5:00 pm. The location is the Sidney Lanier Cottage at 935 High Street, Macon. The cottage was the birthplace of Southern poet Sidney Lanier. Addison has plans to expand his offices and storage space, but expects to continue to hold auctions in historic locations downtown. He notes that Macon has numerous historic places that can be rented for a day, and wants his auctions to be “events” in fine locations, rather than ordinary auctions. It's a way to draw bidders from greater distances to the auctions. There is added incentive to attend this first auction as it coincides with the large annual Friends of the Library book sale and the Cherry Blossom Festival. Nonetheless, those who cannot attend in person will be able to bid. Bidding is available both by telephone and online, or an absentee bid may be faxed or mailed in. The material knows no regional bias, so it will be of interest to collectors throughout the country and around the world.


Addison currently plans on two book auctions per year, but is open to expanding that number as consignments pick up. That is likely to occur as more Southerners become aware that there is now a book auction house in their part of the country. Consignments can range from a book or two up to complete collections. Most books will be sold individually, and Addison looks for a minimum in the $200-$250 range. He feels that having a minimum lower than the large houses will enable more sellers and buyers to participate, while still keeping the quality high. Some lower valued books may be sold in “shelf” sales, but this will be a small minority of lots.


While Addison's expertise is in books, he has a couple of colleagues who specialize in art and jewelry. As a result, there will be auctions in these fields as well. However, these will be separate auctions, allowing book collectors to participate in dedicated books sales.


The first auction figures to have around 250 items presented. Addison noted that it is difficult to categorize the material because it is so varied. There is a signed, limited edition from illustrator Arthur Rackham, two first issue Oz books from L. Frank Baum, several books from western artist Charles Russell, several more from the private Derrydale Press, and numerous selections from the library of Soterios Gardiakos. Gardiakos is a Greek-born American sculptor, and his collection includes numerous works of Greek interest. There are many first editions, including signed ones from Larry McMurtry, Saul Alinsky (recently reemerged in the public eye through less than complimentary presidential comparisons by fellow Georgian Newt Gingrich), and others. There are books of photography, some of which could be considered risqué. There are several works in numismatics. Addison estimates the auction will breakdown around 50-50 between early printed works and modern, mostly first editions.


To learn more about Addison & Sarova, get directions to attend the first auction, place bids from afar, or consign books for their next sale, you can visit their website at www.addisonsauction.com. You may also reach them at 478-787-BOOK or customerservice@addisonauction.com.