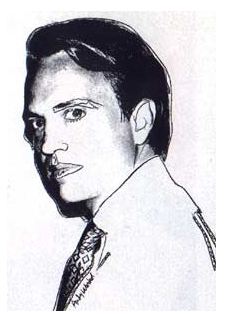 There are many paths to becoming a book collector, but only a few to collecting at the highest level. One of those is to be born to a wealthy family. Carter Burden was such a man. He was a great-great-great grandson of Commodore Cornelius Vanderbilt, the railroad/steamship shipping tycoon. Vanderbilt was one of the wealthiest men in American history, a fortune estimated to be worth something like $150 billion in current dollars. Of course, that has been diluted over the generations, but you can dilute $150 billion many times and still have a lot left over.

Burden was born Shirley Carter Burden, Jr., in Beverley Hills in 1941. The family moved to New York, and when Burden entered politics in the 1960s, he dropped the “Shirley” from his name. One can't help but be reminded of the classic “Don't call me Shirley” line from Airplane. Through much of the 1960s, Burden was known primarily for parties and high living. According to his New York Times obituary, he and his first wife threw “spectacular parties,” with guests including the likes of Andy Warhol, Truman Capote, Norman Mailer, and Robert and Edward Kennedy. Their names constantly showed up in gossip columns. However, by 1966, “they had begun to turn away from frivolity.” In particular, Robert Kennedy had a deep impact. Though born of wealth and privilege, Carter Burden turned to progressive causes, helping those not having the advantages he possessed.


Carter Burden ran for New York City Council in 1969 and won handily. Attempts at other offices were not successful, but he served on the council until 1977, a very popular figure in his upscale Manhattan district. Meanwhile, he developed his business interests. He may have been born to wealth, but that does not mean he did not do well on his own. He at one time owned the Village Voice and after he sold that, founded a conglomeration of many radio stations. His great-great-great grandfather would have been proud. In 1977, five years after his divorce, he remarried Susan Lombaer. They were still married in 1996 when Burden died at the age of 54.


Among Burden's passions were art and books. Burden has been quoted as saying, “You can never be too thin, too rich, or have too many books.” His art collection included names like Picasso and Matisse; his books names such as Hemingway, Fitzgerald, and Faulkner. According to the Times, the collection “he assembled in the last 17 years was regarded as one of the finest in the world.” When he died, many of his books were given to the Morgan Library, reportedly 30,000 books and other papers worth as much as $10 million. Others remained in the large Fifth Avenue home of his widow, lining her bookshelves. That is where they were in 2009 when Timothy Smith, an electronics installer, began to work in her home.


At some point, Mr. Smith decided to do more than just install electronics in Mrs. Burden's house. He also thought it would be nice if he helped clear out some of the clutter on the bookshelves. At first Smith claimed Mrs. Burden had given him permission to clear some of the books left to “rot” in the basement. Supposedly, she thought it was all junk, even though they included a signed F. Scott Fitzgerald said to be worth $500,000. Later, he adjusted his story to say the maid had given him permission to cart the stuff away. That's more authority than the typical maid has, but Mr. Smith was grasping for an explanation other than the obvious one. Finally, facing the possibility of up to 25 years in a house even bigger than that of Mrs. Burden, Smith decided it would be wise to cop a plea. On February 16 last, he returned to court to hear his sentence.


The plea was a good choice. Judge Charles Solomon sentenced him to 1-3 years in prison, which is quite a bit less than 25. Still, Mr. Smith could not leave well enough alone. At sentencing, despite his plea, Smith once again maintained that he took the books in good faith, that he believed he had permission. Pressed by the Judge whether he was denying the truth of his guilty plea, he said that he took them in the presence of someone who gave him permission, evidently that poor maid. Smith was treading on thin ice here. Deny the truth of your guilty plea and the Judge can throw it out, send you to trial, and in this defendant's case, put him back at risk of a 25-year sentence. Fortunately for Mr. Smith, there are too many cases on the docket in New York and the courts have to dispose of them as expeditiously as possible. The Judge cut him off, pronounced sentence, and sent Mr. Smith on his way.