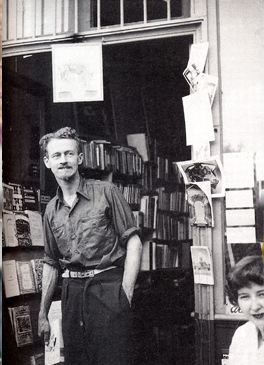 George Whitman, many years ago.

To last in the book selling field for a long time, you have to have an at least workable business model, and a dedication to the field of books. To last in the field a very long time, you also need to be granted a long lifespan. George Whitman had all three. An American by birth who opened his shop in Paris, and was not all that young a man when he started, mind you, Whitman lasted in the trade for 60 years. His magic was longevity. Whitman died in Paris on December 14, 2011, just two days after his 98th birthday.

According to the bookseller's website, George Whitman was born in Orange, New Jersey, in 1913, but moved to Salem, Massachusetts, when still young. After high school, he attended Boston College, graduated in 1935, bummed his way through Central America, made his way to Hawaii, then San Francisco where he worked as a cable car conductor, and back to Massachusetts where he attended Harvard. He was called into service during the war, where he saw much of Europe in a medical unit, and then returned to the U.S. to run a small bookstore in Taunton, Massachusetts. Next, he traveled back to Europe, and took up what would prove to be permanent residence in Paris in 1948. In 1951, he opened his bookshop, Le Mistral, named after a girlfriend. However, that name would soon be changed to the one for which he would be known – Shakespeare and Company.


That was not an original name. Shakespeare and Company was a famous Paris bookshop dating back to the 'teens. It was most noted as being the original publisher of James Joyce's novel Ulysses. Proprietor Sylvia Beach was willing to risk publishing the book after all others Joyce approached declined, fearing censorship. France was more open, so Beach took the chance. However, the original Shakespeare and Company was forced to close down during the war, and although Sylvia Beach lived until 1962, it never reopened. Whitman was inspired by Ms. Beach, and evidently more so than by his first love, as he quickly renamed his bookshop in honor of the original. He would take the honor one step further in 1981 when he named his only daughter “Sylvia,” also after Ms. Beach.


Over the succeeding 60 years, the second incarnation of Shakespeare and Company would develop its own reputation, also as a second home to writers and various other interesting and unusual people who made their way through its doors. Whitman was a good friend of Lawrence Ferlinghetti, who encouraged him to open the bookshop. Henry Miller, Anais Nin, and Allen Ginsburg were among the many notables to pass through his shop. In 2006, George Whitman was honored with an award as an Officier des Arts et Lettres by the French Minister of Culture.


A few years ago, George Whitman turned over operation of the bookshop to his daughter, Sylvia. He continued to live upstairs over the shop, and served as something of a bookseller emeritus, virtually to the end of his life. Shakespeare and Company continues to operate, now in its 61st year, under the management of George's daughter. Whitman was buried in Paris' Lachaise Cemetery, in good company, with Balzac, Apollinaire, and Wilde.