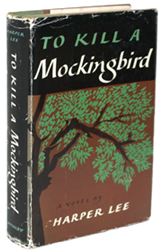 Harper Lee's To Kill a Mockingbird.

AbeBooks has released their list of the Top 10 highest price paid for books on their website, and the list may be more telling for what prices were paid than what is on it. AbeBooks, even as the leading book listing site, has never been a source for the highest prices. You may see books listed for hundreds of thousands of dollars, but if those books are sold, they are sold outside of the site. Few people will press a “buy” button for a couple hundred thousand dollars without discussing the purchase with the seller first. The big sales are made either directly with the dealer, or at auction, where a well-known auction house provides the description and its own promise of accuracy and authenticity. Indeed, we have never seen a book sell on AbeBooks that would even come close to qualifying for the AE Top 500 list of prices at auction.

Nevertheless, we are seeing price movement at the top on AbeBooks that is hard to ignore. People are paying prices on Abe unheard of in the past. This past year, the top price paid on AbeBooks was over $50,000. This is different. It is also something of an aberration, being more than double the price of number 2. However, when we went back two years to compare to the Abe Top 10 of 2009, what we found is that that year's number 1 item sold for $17,000, which would have only tied for number 7 in 2011. The number 2 item from 2009 would not have even made it to the Top 10 for 2011.


Clearly something is happening here. It isn't that prices are rising quickly, as AE's Trends in Book Auction Prices charts reveal that the market has been, at best, flat over the past two years. Evidently, buyers are becoming more comfortable buying fairly expensive items on AbeBooks. No, they may not be ready to push the “buy” button for a First Folio or a folio edition of Birds of America yet, but the confidence level is rising. Abe is inching its way further into the business of selling higher priced books, more so than ever before.


9. An Authentic Account of an Embassy from the King of Great Britain to the Emperor of China, George Staunton's account of a late 18th century mission to China. $15,800.


7. An Authentic Account of an Embassy from the King of Great Britain to the Emperor of China, by George Staunton. If this sounds remarkably like #9, it is, except this is a second edition, and it was signed by Staunton. $17,000.


5. Fourteen pages of manuscript notes about Thomas Carlyle written by John Ruskin. These were used for a book Ruskin was preparing. $18,750.


1. Oh the irony! Number 1 on the list of highest prices paid was written by a man who despised capitalism and the great wealth it would take to spend over $50,000 on a book. It is Das Kapital, Kritik der politischen Oekonomie, by Karl Marx. What could be a more fitting example of the death of Communism? $51,739.