Internet Giants Amazon and eBay in a Tax War 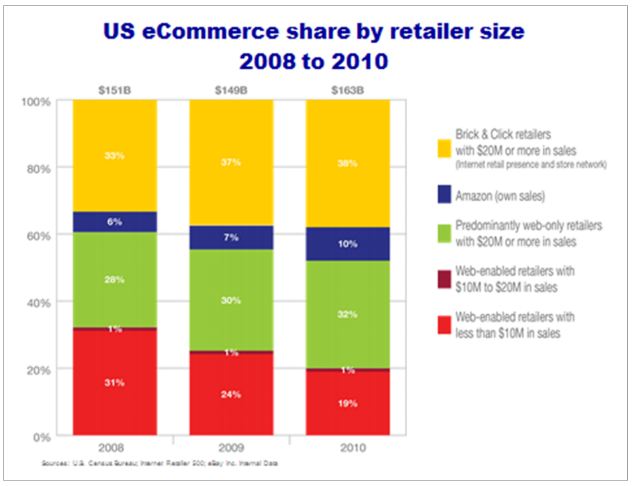 A graph presented by eBay intended to show that it is large retailers, not sales taxes, that hurt.

Two internet behemoths, and two of the largest booksellers in the world, went at it in testimony before the House Judiciary Committee recently. The subject was the collection of out of state sales tax by internet retailers. And here is the surprising thing – each was focused not on their own business interests, but on those of you, the small bookseller or other merchant. You may have found them at times heavy handed and too quick to raise their fees, but on this issue, they are both fighting for you. Oddly, though, they reach totally different conclusions as to what is in your best interests. Those conclusions are as different as are their own personal interests. It's funny how things happen that way.

The issue is whether an online business must collect sales tax on items sold to out of state customers. Right now, the U.S. Constitution, as interpreted by the Supreme Court, says that a state can only require an out of state retailer to collect sales tax from customers within their state if that retailer has some connection to that state, like a store or warehouse located within its boundaries. However, that court has implied that if the federal government passed a law allowing states to demand out of state retailers collect a state's sales tax, regardless of whether they had any presence, then they could be forced to to do so. Naturally, most states would love to have the federal government pass such a law, as they could collect a lot more sales tax money that way. Many consumers probably disagree.


However, we will leave aside the interests of government and consumers, and instead, as Amazon and eBay did in their testimony, focus on the interests of booksellers and other retailers, big and small. Amazon came out strongly for a federal law requiring internet retailers to collect state sales taxes, counterintuitive to their long stonewalling of sales tax collection. Ebay came out just as strongly opposed.


Amazon's position is the more surprising. In his testimony, Amazon's Vice-President for Global Public Policy, Paul Misener, stated that the internet retailer has long supported such federal rules, and that may be the case. However, as states in the past have tried to get Amazon to collect their sales tax, no company has been more adamant in its refusal. The company has closed warehouses in Texas, let go “agents” in other states when those states asserted those were sufficient connections to force Amazon to collect their sales tax. In Tennessee, it demanded the state promise not to find a connection before it agreed to open warehouses and hire workers in that state. In California, up until a few weeks ago, Amazon threatened to put an initiative on the ballot to prevent state officials from requiring sales tax collections on out of state retailers on the basis of such connections. No one has played hardball like Amazon on this issue, so why are they now asking Congress to pass a law that would require them to collect sales tax?


Before attempting to answer this question, let's look at what Amazon said. Mr. Misener stated that passing such legislation would serve the purposes of “protecting states’ rights, addressing the states’ needs, and leveling the playing field for all sellers.” On that last concern, Mr. Misener repeated the argument that so-called “Main Street” retailers have been arguing for years – that they are at a disadvantage to online sellers because they must charge their customers sales tax while the online retailers do not. Tax-free prices are cheaper than taxed ones, hence a competitive advantage. “Fairness among sellers should be created and maintained. Sellers should compete on a level playing field,” Mr. Misener asserted. Then he added, “Congress should not exempt too many sellers from collection, for these sellers will obtain a lasting un-level playing field versus Main Street and other retailers.”


So, going back to the question why Amazon is doing this, many “Main Street” shops might be dubious of their motives. Main Street booksellers have long complained that Amazon was the epitome of the unlevel playing field, using their size and lack of overhead by not having a physical presence on Main Street to undercut and eventually drive them out of business. There has long been the refrain that Amazon, in effect, uses their stores as a showroom. Customers come in to look at the merchandise on Main Street, make their selection, and then go home and order the merchandise for less from Amazon.


Well, not to be suspicious, but behind Amazon's words, they may now see their self-interest coinciding with that of “Main Street” retailers. Amazon has opened up distribution centers in several states to reduce their costs, and they wish to open them in more. They have what may (or may not) be considered “agents” willing to support their site in every state. Meanwhile, the states are pursuing them more aggressively than ever before. Just a few weeks back, Amazon threw in the towel in its dispute with California and agreed to begin collecting California sales tax next September. California has Amazon's largest customer base, and they want to be able to open warehouses close to their customers. The changing situation is forcing Amazon to collect sales taxes in more and more locations, in effect putting them at a competitive disadvantage to smaller internet retailers with a location in just one state. They are starting to feel the pain “Main Street” merchants have felt for years.