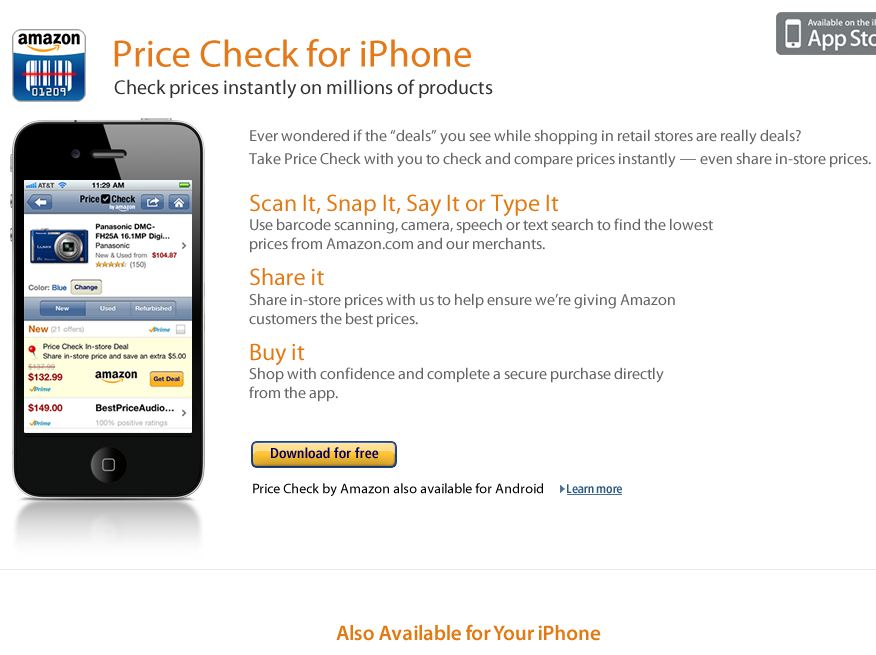 Even as Amazon has begun to pacify “Main Street” retailers with their support for the Main Street Fairness Act concerning sales taxes (see article in this month's AE Monthly), the giant online bookseller and general retailer thoroughly antagonized the bricks and mortar crowd with a recent pre-Christmas offer. Any goodwill recently achieved quickly evaporated. Meanwhile, eBay, which has taken the other side to “Main Street” on the sales tax issue, rushed to local retailers' defense in this latest uproar.

This controversy has arisen over one of Amazon's “apps,” those ubiquitous pieces of software one downloads to smart phones and tablet computers. Amazon – and they aren't the only one – has designed an app that allows you to do comparison price checks. That concept is not so bad. In fact, it's nice to be able to search for the best price. However, what upsets Main Street merchants is that they encourage it to be used in their stores. In other words, you take your smart phone into the store, scan the bar code or otherwise describe the item you see there (by typing, speaking, or taking a picture). It then sends the information to Amazon, which immediately responds with the Amazon price. If the Amazon price is lower, which most often is probably the case, especially if it is a state where Amazon does not collect sales taxes, you can order it directly from them.


To Main Street merchants, this is dirty pool. The consumer is, in effect, using the Main Street shop as Amazon's showroom. They can look over or try out the item, even use the store's salesmen to explain its benefits and features. Then, the consumer turns around, presses a few buttons, and buys the item from Amazon – right there! The Main Street merchant pays for the displays and expertise, but receives nothing in return, not even a thank you from Amazon.


Now, if this wasn't bad enough, they felt Amazon was really rubbing it in their face when Amazon announced a special offer for December 10. On that day, Amazon announced, “...the simple act of price checking while shopping in physical retail stores will get customers an additional 5% discount (up to $5) off Amazon’s price on up to three qualifying products in eligible categories...” Ouch. Check the price while shopping in someone' else's retail store and you get an extra discount. Get even more people to price check while there, and maybe even send some people to Main Street who have no intention of buying there because it enables them to get an added Amazon discount. As Amazon so tactfully noted, “Amazon anticipates December 10th will be one of the biggest days of the year for Price Check.” Local merchants may not have shared Amazon's enthusiasm.


As if this was not enough said, Sam Hall, Director of Amazon Mobile, added, “The ability to check prices on your mobile phone when you’re in a physical retail store is changing the way people shop. Price transparency means that you can save money on the products you want and that’s a great thing for customers.” As yet, we have not noticed Amazon promoting transparency in the other direction, posting others' deals, or service and timing advantages offered by local retailers, next to items for sale on their website, but perhaps that is coming.


Amazon also encouraged their price checkers to send them the prices they found in stores. Mr. Hall explained, “We scour online and in-store advertisements from other retailers, every day, year-round. Now, we are enabling customers to use the Price Check app to share in-store prices while they search for the best deals. This is a powerful opportunity for customers to get involved and ensures Amazon customers get the best possible prices.”


We should point out that booksellers were not the target of this promotion. The categories were electronics, toys, music, sporting goods, and DVDs (though some booksellers sell music and DVDs). Nonetheless, the principle here, and its potential use against booksellers, elicited a sharp response from the American Booksellers Association. ABA CEO Oren Teicher published an open letter to Amazon CEO Jeff Bezos, saying, among other things, “We could call your $5 bounty to app-users a cheesy marketing move and leave it at that. In fact, it is the latest in a series of steps to expand your market at the expense of cities and towns nationwide, stripping them of their unique character and the financial wherewithal to pay for essential needs like schools, fire and police departments, and libraries.” The ABA has been in a long war of words directed at Amazon over the issue of sales taxes, and while pleased with the firm's decision to begin collecting those taxes in California next year, it was “outraged” by this latest action.