A Follow Up – Probate Court Examining Expenses of Wealthy Heiress 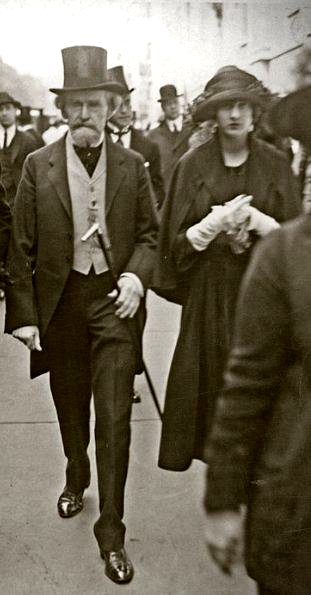 Huguette Clark and her father at New York's Easter Parade in 1922.

This month we have an update on the case of Huguette Clark, the wealthy heiress who left the bulk of her estate, including her library and works of art, to a museum to be created to display her collection. They will be housed in Santa Barbara, California, in her 21,000 square-foot mansion, that will now become home to the museum. Ms. Clark was 104 years old when she died in May.

Huguette Clark was the last of seven children of Montana “Copper King” William Andrews Clark, once said to be second in wealth only to John D. Rockefeller. Her father was 67 years old when she was born in 1906 to the second of his two wives. He was already immensely wealthy when she was born, and she grew up in an enormous mansion he built in New York. Huguette was intensely close to her mother and older sister, Andrée, but evidently not to her four surviving half siblings from her father's first marriage. Sadly, her sister died in 1919 at age 16, a devastating blow to young Huguette. Her father died in 1925, but in 1928, at the age of 22, Huguette married William Gower, a law student who had worked for her father. The marriage was unhappy and brief. Later it was claimed the marriage was never consummated. We don't know, but the two were soon separated, and two years later divorced. She never remarried.


After that, the shy Huguette went into almost complete seclusion. There are no known photographs of her after 1930, though she lived another 80 years. She did go to social events on occasion with her mother, but by the 1950s, as her mother's health deteriorated, those became fewer, and after her mother died in 1963, she became a total recluse. By that time, all but one of her half siblings had been dead at least two and a half decades, and there seems to have been little if any contact with the one who survived to the 1970s. Nor did she have much contact with her half nephews and nieces, and grand nephews and nieces. In her final years, she apparently rejected any attempts at contact from them, or at least her advisors did. She totally withdrew into her private world, having contact only with a few advisors and caretakers, some of whom may have appreciated the shy and generous woman, others of whom may have more appreciated her money.


When she died, Ms. Clark was worth an estimated $400 million. That sounds like a lot, but her father left her around $60 million in 1925. Adjusting for inflation, that would be closer to a billion dollars today. She, or her advisors, did not manage her wealth particularly well. She owned the estate in Santa Barbara which will become the museum, but she had not visited it since the 1950s. In 1952, she also purchased another estate, closer to her New York home in Connecticut. She never even visited the place. Nevertheless, the estates have been maintained by caretakers and help in pristine condition all of these years. She also owned a 42-room apartment in New York, where she and her mother moved after her father's death. Even that she had not seen since 1988. Reportedly, she only inhabited a small corner of the apartment anyway. In 1988, Ms. Clark decided she needed to go to the hospital. She never returned. She remained in various hospital rooms the final 23 years of her life, though not suffering from any serious illness. She was just more comfortable in the small, protected surroundings.


When anyone with money dies, you can expect there will be conflicts, perhaps contesting of the will. When someone who makes Howard Hughes look like a social butterfly dies, you can expect all kinds of questions to be raised. Were the few people who had access to Ms. Clark, and managed her affairs, carrying out her wishes, or carrying out their own? They had exclusive access to a very elderly, very eccentric lady, who for her own psychological reasons, would be unlikely to ever contact a family member or other outsider on her own. Such a person would be a prime target for manipulation, but whether she was manipulated, or her wishes faithfully carried out, is something a court will have to decide.


The Probate Court demanded a complete accounting of money spent on Ms. Clark's behalf over the last 15 years of her life. She, or her representatives, spent a lot. The wife of her doctor received substantial payments over the years to manage some of her affairs, but she was also very friendly to Ms. Clark. The woman, like Ms. Clark, spoke French, and the reclusive heiress liked to speak in French, believing that would make her conversations more private. However, this woman died shortly before Ms. Clark, at the youthful age of 89.


The largest beneficiary (other than the museum) is her nurse, and also friend, Hadassah Peri. She received substantial bonuses over the years, sufficient to buy several houses and expensive cars, and is to receive another $33.6 million through the will. That immediately sounds suspicious, but perhaps not. Ms. Peri came to Ms. Clark 20 years ago, sent by an agency. Ms. Peri regularly visited her and spoke with her on the phone, practically every day over the years. There is no reason to question whether Ms. Peri, a poor immigrant from the Philippines, was not also a friend. Ms. Clark obviously took to her, and may have thought of Ms. Peri's children as something of the grandchildren she never had. For all her eccentricity, everyone who ever did get to know her spoke of Ms. Clark as a kind, caring, and generous person. She was just inordinately shy. It is not surprising she would have lavished a few million dollars over the years on Ms. Peri, considering she had so much money and no one else to leave it to.