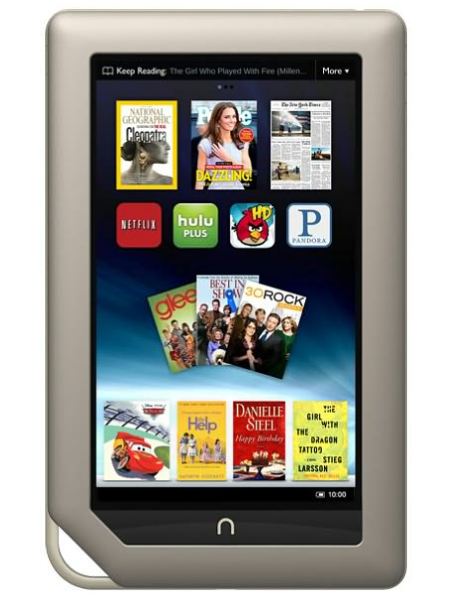 Last month we wrote about the enormous steps forward by the largest online bookseller, and now everything else seller, Amazon.com. Click here. Amazon is using its Kindle eBook reader to catapult itself into the tablet computer business. In other words, it is taking on market leader Apple and its incredibly successful iPad. This is no small competition over yet another electronic device. With a tablet computer comes the opportunity to sell content, potentially far more profitable over the long haul than a one-time sale of a device. While many others either do or could manufacture tablets, few companies have access to large amounts of content to sell. Apple does. And Amazon, with all of its electronic books for starters, is another that does. Amazon and Apple are headed into a fierce competition, and considering the size of the market, it is possible that both will succeed.

Now comes Barnes & Noble. B&N is an old-line chain of bookstores, a purveyor using a model very successful in 1990s, but dying in the new century. Its longtime closest competitor and look alike, Borders, recently succumbed to the model's old age, boarding up the last of its stores in September. Many observers and business analysts began a death watch for B&N, its future demise seemingly inevitable. Not quite yet. B&N's management, uncreative and behind the times for so long, made a last ditch effort when it introduced an electronic reader of its own, the Nook, last year to compete with Amazon's Kindle eReader. Now the Nook is morphing into a tablet computer as well. And, Barnes & Noble, with access to voluminous amounts of reading material to sell, is one of the few companies with content to to go along with its tablet. Can Barnes & Noble, dying bookseller of yesteryear, pull off this “Hail Mary” touchdown pass in the final seconds of the fourth quarter to win the game? Stay tuned.


Technologically ages ago (a few months), Amazon had just its pioneering and market leading eReader, the Kindle. Late to the game Barnes & Noble responded with its eReader, the Nook. Meanwhile, Apple controlled the market for tablets with its iPad. But then, B&N did something different. It introduced a Nook eReader that had some of the features of a tablet. It was a mongrel. Essentially an electronic reader, it could connect to the internet and do various tablet computer-like things. B&N actually beat Amazon to the punch. However, Amazon responded. A few weeks ago, it introduced the Kindle Fire, still part electronic reader, but more like a tablet computer. So, the ball was back in B&N's court. Once again, B&N lifted itself off the canvas with its Nook Tablet. This is more like a tablet than its earlier Nook. The question, now, is why would anyone buy a tablet from a weaker player, like B&N, when models can be purchased from powerhouses Apple and Amazon?


It is a matter of positioning. At $249, it is substantially cheaper than its Apple counterpart, though Amazon has slashed the Kindle Fire to $199. We will not go into technical specs. - speed, memory, weight, and such. Few would question the iPad is the best pure tablet. However, according to Barnes & Noble, their tablet is better designed for readers. The claim, which seems to have the backing of many commentators, is that it is easier to read eBooks on a Nook Tablet than on a Kindle Fire. As Amazon has moved to be more tablet than eReader-like, to take on Apple, B&N has tried to find a niche for people who want the best in eReaders, but with tablet-like features. And, while we always hear that books are dying, that pre-mortum pertains to printed books, not electronic ones. People are still readers, and if Amazon is going to shift away from readers to more generalists, B&N is attempting to jump into the void.


An example of this can be seen in sales by gender. B&N CEO William Lynch noted that 60% of the books and magazines in their stores are purchased by women. Men may want high tech gadgets that can do everything, but many women prefer simply to read a book or magazine. The Nook Tablet is designed to appeal to them (and men with similar priorities). Barnes & Noble has lots of books to offer Nook readers, as well as having the most extensive selection of electronic magazines and newspapers anywhere.


B&N has another advantage over Amazon. Their stores, long a costly a millstone hung around their neck, now offers B&N a place where tablet customers can seek help and instruction. Amazon cannot provide this. Whether Nook and content sales can justify the cost of B&N's stores remains to be seen, but Apple successfully operates a chain of retail outlets.


How did the experts react to Barnes & Noble's plan? Well, if the stock market reflects what those experts willing to put their money down believe, the reviews were positive. The value of the company's stock rose 50% in the ten days after the Nook Tablet was introduced. That sounds like a fairly strong endorsement to us.


Of Course, Mr. Lynch did not just hype the Nook Tablet. He was wildly optimistic about B&N's prospects in general. Though sales of printed books are declining, a trend he expects to continue, they are still a popular item, and the demise of Borders and many small independent retailers is expected to increase B&N's market share substantially. Meanwhile, sales of eBooks grow at a rapid pace, and B&N now believes it is poised to grab an increasing share of that market.


Finally, there is one ace in the hole that may take B&N from the edge of despair to success in the second decade of the 21st century. B&N does not have the financial strength to compete indefinitely with an Apple or an Amazon. It must grow its sales and profits rapidly if it is to avoid being crushed by its larger competitors. However, as noted before, there are others who might like to get in the tablet market, but lack the content to do so. Apple has quickly grown to be the second most valuable company in America (behind only Exxon-Mobil) and Amazon is biting at their heels. There is a most lucrative business here, and any large player in the field of technology (insert name here) might look at B&N as an entry, perhaps their only entry, to the field. As such, B&N is a potential takeover target. If that day arises, you can be sure Mr. Lynch will be asking top dollar for a company that once looked like it was heading down the same road to bankruptcy Borders followed earlier this year. Nothing is guaranteed, but there is finally a light visible at the end of Barnes & Noble's long tunnel.