The Library of America: Where the 19th Century Meets the 21st 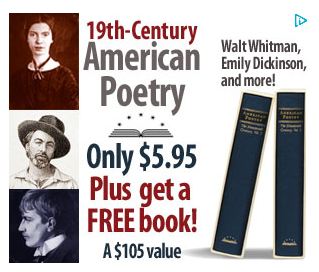 I have come to expect all types of goods to be advertised on the internet. Occasionally, one might even see something sort of book related, such as an electronic reader or some phenomenally popular new series. What I wasn't prepared for was the advertisement I saw recently while checking out the weather forecast. There it was – a collection of 19th century poetry, featuring Walt Whitman, Emily Dickinson, and “more.” Is there really a sufficient market for such classic literature to justify advertising on the internet? What's more, these weren't electronic versions of these texts or some other sort of 21st century technology. These were books – paper and ink, with old-fashioned hard covers.

In the days ahead, I discovered similar ads for collections of works by Mark Twain and James Fenimore Cooper. Who could be selling new print editions of these old classics to a mass-market audience today? The answer is... The Library of America. The Library of America is a surprising organization, a nonprofit publisher that has been operating somewhat below the radar for over three decades. It was formed in 1979 by various scholars and literary critics who were concerned about the availability of the works of America's greatest writers. Of course, those were the days before the availability of massive quantities of old books online, or electronic and online copies of books, generally offered free if published before 1923. Still, though circumstances have changed since 1979, the work of the Library of America goes on. Their role, somewhere between purveyor of text and publisher of fine editions, continues to fill the shelves of both longtime loyal followers and new clients, some of whom discovered the Library when checking out the day's weather.


The founders of the Library originally secured their funding from the National Endowment for the Humanities and the Ford Foundation. In 1982, their first book was published. Now, 225 titles later, the Library has an active publishing schedule set for next year. We asked Brian McCarthy, Associate Publisher of the Library of America, to tell us a bit more about the Library and its work, and how it reaches people in the second decade of the 21st century.


What makes the Library of America very different from any other publishers we have known is the multitude of roles they seek to fill. It started from a basic preservation role, that of preserving access to the great American literature of the past for today's generations. However, other roles include making this classic literature available at an affordable price, creating fine, collectible quality editions of these works, and selecting the most authoritative versions of these books to publish. Mr. McCarthy explained the multifaceted mission by noting, “From the beginning, our mission has always been about more than availability. It has been about presenting America’s best and most significant writing in the most authoritative possible texts and in a durable, affordable, aesthetically pleasing, and convenient format.” He then pointed out, “In addition, each and every item in a Library of America volume comes from the most reliable, authoritative source for that particular selection. Choosing an authoritative text involves studying the textual history of each work to determine which of its various versions is the most appropriate to reprint.”


Curating works at the Library of America is not limited to selecting the most accurate text among competing editions. It can also lead to compilations that are original works. Reporting Civil Rights: American Journalism 1941-1973, is a collection of articles, features, columns, and book excerpts gathered together “to present a compelling as-it-happened panorama of that turbulent era.” Abraham Lincoln: Speeches and Writings 1859 – 1865, published “555 letters, speeches, messages, proclamations, orders, memoranda, drafts, and fragments that together form a record of the Civil War as experienced by its most central figure.” Mr. McCarthy points out, “while a diligent researcher might locate a particular letter or speech on the Internet, there is no equivalent digital selection of Lincoln’s most essential writings from the war years.”


Purchases from the Library also reflect the varying missions behind their publishing. Mr. McCarthy explains, “Our readers use books for many reasons: as readers, as collectors, as scholars, as students. Many buy our books because they want to own a permanent collection of a favorite author; others buy our books for the quality of the bindings and their appearance in their personal libraries. Many customers might buy only one title or boxed set, but we have several thousand customers who own virtually all 225 titles in the series.”


Of those 225 titles, which were the biggest sellers? The top seller goes to Thomas Jefferson: Writings, with sales of 217,518 copies. It is followed by Mark Twain: Mississippi Writings; Abraham Lincoln: Speeches 1859-1865; Abraham Lincoln: Speeches 1832-1858; and Walt Whitman: Poetry & Prose. Each of these was originally published in the 1980s, but that does not imply that sales were greater years ago. These works have been available for going on three decades, so their sales totals are naturally higher than for more recently published works.