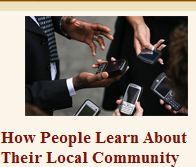 The role of newspapers in the community, and with it, perhaps, their long term viability, continues to diminish, a report recently released by the Pew Research Center revealed. They may find themselves in a position similar to the old-style large department stores, like Sears and Wards. They offered a multitude of products, but were not outstanding in any. Much of their business moved to specialty retailers who could fill a particular category better. We hear much about the decline of physical books these days, but the prospects for printed newspapers may be far more dire than printed books.

Earlier research had shown a significantly declining role for local newspapers in the reporting of national and international news. A Pew report released in January disclosed that newspapers had dropped from being one of the top two sources of such news for 50% of the population in 2003 to just 31% of the population in 2010. It is a steady, and likely inexorable decline, as printed newspapers can never again be timely in the internet age. Even television dropped from 80% to 66% over that time period, but the internet rose dramatically, climbing from 20% to 41%.


However, newspapers have always been a mainstay of local news, or at least so we thought. Most national and international news comes from sources like the AP, which can be accessed online, but there aren't such sources for local news. It has primarily been either the local newspaper or television. And, newspapers, which tend to provide more stories and greater, in-depth coverage, had a leg up on their rivals.


That advantage does still show in some ways. Despite its declining position, newspapers still lead as the primary local news source in 11 of 16 categories. The problem is that these are not the topics that are of the greatest interest to most people. Only one was a leading subject – crime – while others included such things as community events, art, government activity, zoning, and social services. Newspapers trailed in the top two categories – weather and breaking news – and the internet has been taking over such fields as evaluating local restaurants and other businesses.


Even more troubling for newspapers is the demographic breakdown of the responders. Newspapers fare far better with the 40 and up age bracket than the under 40s. For those over 40, the internet is one of the two primary resources for only 2 of 16 categories, but for those under 40, it is a leader in 15 of 16. There is an obvious trend here. Meanwhile other resources with a younger bent, though still small, are starting to make significant headway. Social media and smart phone apps are a couple of such newer sources.


Interestingly, the Pew report indicates that the websites of what they call “legacy media,” newspapers and television, are not major factors. Indeed, their numbers in this poll include the contributions of their websites, but those numbers are only in the single digits. This could be very troubling to newspapers that hope to survive by shifting their presentation from printed paper to online sites. The public may not follow them. Topics of either great interest, or significant niche appeal, may fall to topic-specific websites. You can go to a site that promotes restaurant reviews, weather forecasts, items for sale (what used to be the highly profitable classified section of newspapers has become Craigslist), and real estate listings, leaving newspapers to pay reporters to provide news about zoning ordinances. This is not a prescription for success. This is the reason for the Sears analogy – focused internet sites on a particular, popular topic may provide more information on that field, leaving newspapers a second-rate source on virtually everything with a significant following.


Perhaps of greatest concern was the way people responded to the question of what impact would it have on their ability to keep up with local news and information if their community newspaper disappeared. Fully 69% of the population said it would have no or only a minor impact on them (no – 39%; minor 30%). For young adults (18-29), that figure rises to 75%. Newspapers will have a harder time surviving if they do not fill a compelling need.


A disconcerting feature of this report is that the declining news source - newspapers – is a leader in more “hard” news categories, such as government, zoning, politics and schools. Those types of media, such as the internet, that are still growing lead in weather, restaurants, traffic reports and “lighter” fare. Meanwhile, less reliable internet sources, such as social media, compete for what was “harder” fare. There is much concern about the quality of education provided today. The shift in interest away from hard, verifiable news may be a symptom of this. Unfortunately, if sources of “hard” news dry up, it will no longer be available to coming generations even if they do develop an interest.


We could see more “cable-ification” of American news. Cable television once brought us a burst of information, including 24-hour news sources. However, in time, it appears that a lower common denominator rules, and cable “news” stations now pack their hours with opinionated talking heads, rather than real news. It's cheaper to produce, and we eat it up anyway. It's more entertaining. News radio has mostly been replaced by angry, shouting voices who care nothing about honest news, while cable television “hard” news is mostly limited to daytime hours. The voice least affected by these changes – newspapers – is becoming of less relevance and may one day disappear altogether. This cannot be good news.