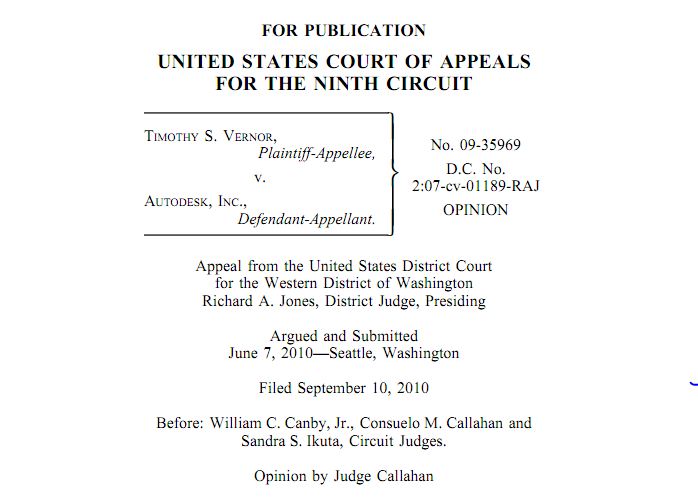 The Appeals Court came down on the side of restricting the sale of used items.

We recently received a message from a “Ken,” self-described “Overworked Lead Blogger” at Heroic Times, a blog website. You may have seen it too as he sent the message to numerous used and antiquarian book related sites. It has to do with a decision by the U.S. Court of Appeals for the 9th Circuit (west coast) that was effectively allowed to stand by the U.S. Supreme Court. The Supreme Court declined to hear an appeal of that decision, which is not quite the same as affirming it, but allows it to be almost the law of the land, and definitely the law on the west coast.

The case had to do with the reselling of computer software. The decision essentially prohibited people from reselling computer software where such is forbidden in the terms of the original “sale” (or perhaps “lease”). Computer software may not be a big item for sellers of used books, but Ken's concern is over what happens if book publishers start printing such prohibitions of resale in the books they publish. Can they now legally shut off the sale of used books going forward?


The issue of resale of copyrighted material goes back to a Supreme Court decision in 1908. Evidently, some publishers must have felt that since they held a copyright on a book, a purchaser of that book could not resell it to another without violating the copyright. The Supreme Court said no, developing something known as the “first-sale” doctrine. Essentially what it said is that once the copyright holder has made the “first sale” of a specific item, the buyer is free to do as he pleases with that item, including reselling it. He can't make copies of that book and resell them. That violates the copyright. However, he may resell the original copy for which he paid. A year later, Congress passed a statute that reaffirmed that court decision, and while it has been updated over the years, such as adding phonograph records, it basically maintains the “first-sale” doctrine as the law of the land.


Starting in the 1970s, and greatly expanding ever since, a new, ephemeral product began to be sold – computer software. It usually was placed on some type of physical object, like a floppy disk or later a CD, but it wasn't a physical object in quite the same way as a book. In fact, often it was meant to be copied, that is, copied from the disk or CD to a computer's hard drive. Makers of this software were concerned that the fact that people needed to copy the software to a hard drive to use it would allow them to share that software with their friends, who did not pay for it. You could buy one set, but then copy it onto an unlimited number of computers. Sure, you could share your books and records with your friends, but you couldn't both use them at the same time. With computer software, your friends could copy it to their computers and hundreds of people could use that one set of software at the same time. This, naturally, looked very unfair to the people who designed and sold software.


Their response was to create limitations – you could not resell the software to others. Since this appears a violation of the “first sale” rule, they came up with a better idea. They would not sell the software, or the disk on which it was placed. They would lease it. Now, it's more like the car or house you lease. You don't get to sell it when the lease is up. You have to return it to the owner.


What the software makers were attempting to accomplish was something of an end-run around the “first sale” rule. Since that only applies to sales, they would simply never sell software again. They would lease it. The protection they sought may well be appropriate for something as ephemeral as software, and maybe not. That isn't for us to say. What leasing would accomplish, if upheld, is effectively eliminate the consumer protection afforded by the “first-sale” doctrine. The transaction may essentially work like a sale – you keep the product, the lease never ends – but since it is called a “lease” rather than a “sale,” the manufacturer is able to skirt the protections of the “first-sale” doctrine.


This was how the trial court saw the “lease” - a sale disguised as a lease. At issue was a set of Autodesk software that an eBay merchant was offering for sale online. Autodesk argued that this product was only leased, not sold, so the possessor (as opposed to an owner) had no right to sell it. The trial court looked at the circumstances and decided this was really more like a sale, and so “first sale” applied. The transaction may have been described by Autodesk as a lease, but it smelled like a sale. There was no time limit on the lease, there were no ongoing payments like a typical lease (just an upfront price typical of a sale), and the “lessee” was never expected to return the disk or software to Autodesk when finished using it. It had all of the features of a sale, except that it was called a “lease.” The trial court ruled that the possessor/eBay merchant really was the owner and therefore had the right to sell the software/disk.


This decision was reversed by the 9th Circuit Court of Appeals. Along with the parties to this transaction itself, some heavyweights made arguments on appeal. The Software & Information Industry Association, which includes many of the largest software makers among its members, and the Motion Picture Association of America sided with Autodesk. Ebay and the American Library Association sided with the seller. While acknowledging that a sales-like nature of a transaction is a factor, the Appeals Court essentially concluded that where the language of the contract clearly stated that it was a lease, then a lease it was. So long as the manufacturer specified that it was only granting a license to use the product, specifically restricted the right to transfer the product, and imposed restrictions on the product's use, then the transaction will be recognized as a lease, not a sale. Effectively, it allows a manufacturer, so long as they place the right language in the fine print, to avoid the application of the “first-sale” rule and prohibit their customers from reselling their software when they no longer want it for themselves.

When the Supreme Court declined to hear the appeal, it let this ruling stand, and while it may decide to hear a similar case sometime in the future, and perhaps overturn it, that does not appear very likely.

So what does all this have to do with books? Well, more and more books are being offered as software now anyway. It is easy enough for those selling electronic books to “lease” them instead, saying the “lessee” has a right to keep their copy for life, never make any further payments, and never return it, but they are forbidden to transfer their electronic copy to anyone else. It would shut off the used electronic book trade. But, this is probably not Ken's major concern, since it's hard to imagine there will ever be a trade in collectible electronic books. The question is, why can't publishers place similar restrictions on printed books? They could simply print on each copy that it is available only for lease, and may not be transferred or sold to anyone else. Are words printed on paper somehow different from software imbedded in a disk in terms of the requirements of this decision? Not obviously. A lease is a lease by this decision, and it is not obvious why a publisher of printed books cannot avail itself of the benefits it provides any more than the software manufacturer.


Of course this would not apply to all of the old books out there now containing no such warnings, but books printed in the future could possess such limitations. Since most book buyers are probably not thinking of the eventual disposal/resale of their new books when they buy them, they just want to read them, they likely would accept the terms if a “lease” is all that is available. Years from now, the collector would be out of luck. The publisher could prevent the copy of the rare first edition, found in the attic of the long dead “lessee,” from ever being resold. The heirs could be forced to return it to the publisher, who would be the only one who could legally sell the book to a collector, and for a handsome price.


The court did add a note for those who are concerned about where this decision may lead. “These are serious contentions on both sides,” they pointed out, and “Congress is free, of course, to modify the first sale doctrine and the essential step defense if it deems these or other policy considerations to require a different approach.” That they are, but as the Google Books mess has shown, Congress is reluctant to do much of anything any more. It is Congress' job to debate the weighty issues and decide what is the right public policy, but there seems little indication that Congress will do much of anything that doesn't serve some lobbyist's special interest. Nor is there any guarantee that if they did, the Supreme Court wouldn't find a law designed to protect regular people “unconstitutional.” In 1908, when the “first-sale” doctrine first came down, Teddy Roosevelt was President, and the old Bull Moose made sure that government worked for all of the people. 1908 was a long time ago.