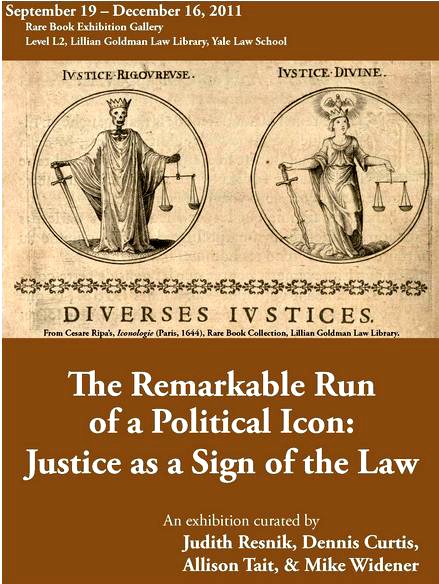 Blind justice is the focus of an exhibition taking place at the Yale University Law Library from now through December 16, 2011. The exhibition is entitled, The Remarkable Run of a Political Icon: Justice as a Sign of Law. We all know the symbol. A lady, representing justice, is seen with flowing gown, often a set of scales equally balanced in her hand. What is most distinctive, however, is the blindfold. Her eyes are covered, keeping out all sight. To her, all parties, rich and powerful, poor and humble, look the same. The blindfold has come to represent impartiality. She seeks no favors, sees no sides in a dispute, only justice.

It was not always so. As this exhibition reveals, a blindfolded Lady or Lord Justice goes back to the early days of printed books, the late 15th century. However, a blindfolded judge was not a symbol of impartiality then, but rather, of a not very bright judge. A person who couldn't or wouldn't see reality was not one in a position to make wise judgments. Indeed, the blindfolded person was a symbol of a fool. A 1497 edition of Sebastian Brant's Ship of Fools depicts a court jester, a fool, blindfolding Lady Justice, bringing her down to his level.


A 16th century work concerning the criminal law and municipal ordinances for the city of Bamburg takes the image a step further. In this book, a woodcut entitled The Fool Blindfolding Justice depicts four blindfolded judges, wearing jesters' caps, with the caption, “Out of bad habit these blind fools spend their lives passing judgments contrary to what is right.”


Still, it was during the 16th century that we began to see blind justice as representing honesty and impartiality, rather than stupidity and corruption. Andrea Alciati's 1582 Opera omnia shows the central figure at a tribunal as blindfolded, apparently representing fairness. Interestingly, his colleagues are without hands, to show they have received no bribes. This nice touch for showing honesty never caught on. Perhaps one Venus de Milo is enough.


By the 18th century, the modern interpretation of blind justice fully takes hold. The pieces displayed in this exhibition run from the negative of Brant's Ship of Fools in 1497 through 1788. By then, the images have reversed their meaning.


The exhibit is curated by Judith Resnik (Arthur Liman Professor of Law), Dennis Curtis (Clinical Professor of Law Emeritus), Allison Tait (Postdoctoral Associate) and Mike Widener (Rare Book Librarian). It will be held in the Rare Book Exhibition Gallery of the Lillian Goldman Law Library of the Yale Law School.

You may view items from the exhibit online by clicking this link.