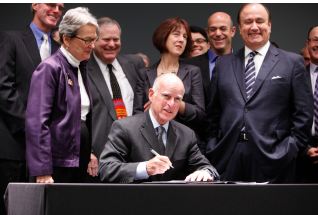 A long-running contentious and caustic battle over sales taxes between online retailer Amazon.com and the state of California came to a quick and unexpected resolution last month. Among those lined up against Amazon, the world's largest bookseller, in this epic struggle was the American Booksellers Association, a trade organization of independent, bricks and mortar bookstores. Considering the vehemence with which Amazon had fought a requirement that they collect sales taxes, it is surprising how suddenly they backed down, in return for a one-year delay.

California, like many states, has long sought to require out-of-state internet and catalogue retailers to collect sales taxes on sales made to customers within their state. However, a decades-old Supreme Court decision has prevented the imposition of a tax-collecting requirement on out-of-state retailers unless that retailer has some sort of “nexus” with the state. “Nexus” has generally been thought of as a physical presence within the state, such as a store, office or warehouse. While chain stores, such as Wal-Mart and Target, have to collect sales taxes even on their internet sales because they have physical stores in most if not all states, internet-only retailers like Amazon do not. As long as they avoid placing warehouses and the like in a state, they do not have to collect the local sales tax.


This has long been a major bone of contention for two parties – the states, who lose enormous amounts of tax money, and local retailers, who believe they are at a competitive disadvantage since they must collect sales tax. The issue has simmered below the surface for decades, but recent state and local budget crises around the nation have led states to aggressively pursue this lost revenue. Technically, local residents are supposed to pay sales tax anyway. There are laws on the books in every state that require residents to self-assess and pay a “use tax,” an amount equivalent to the sales tax, when they purchase from an out-of-state retailer that does not collect their local tax. The reality is, however, that very few people ever pay this tax, something in the 1% range.


Earlier this year, California began to ramp up the pressure on Amazon. It passed a bill stating that local “affiliates,” people with websites that direct traffic to Amazon.com, would be considered agents of Amazon, thereby creating “nexus” with the state. Amazon cried foul and immediately severed its relations with its California affiliates. It then threatened to go over the head of the legislature and appeal directly to the voters, through a voter initiative, to repeal the legislation. Meanwhile, Amazon also held out a carrot to California. It promised to build several warehouses in the state and hire thousands of workers if California would lay off on the tax collecting requirement. This approach had worked earlier in Tennessee. California was not biting. California wants its sales tax revenue, and was determined to make life miserable for Amazon unless it complied.


And so, Amazon blinked. California is a huge market for Amazon, apparently far and away its largest. Amazon did not want to lose its affiliates. Perhaps even more importantly, Amazon wants to get physical with the state. The offer of warehouses and jobs was not merely a ploy to get out of collecting sales taxes. Local warehouses enable the company to significantly reduce shipping costs, and provide the quicker delivery service needed to compete with local stores for impatient customers. Amazon felt a need to be in California, and perhaps also thought it saw the writing on the wall in terms of its ability to forever avoid collecting sales taxes. So, for a one-year reprieve, Amazon agreed to begin collecting sales taxes in California in 2012. Additionally, it agreed to cancel its plan to place a referendum repealing the law on the ballot.


That reprieve may appear somewhat costly for California. It is estimated the state will lose $200 million in sales tax collections over the next year, with municipalities losing a similarly large sum. However, the reality is that without an agreement, Amazon was unlikely to collect the tax anyway, so California may not have lost anything, and faced still more lost revenue a year from now if the case dragged on.


Once California and Amazon reached an understanding, the state legislature repealed the legislation that set in place the expanded definition of “nexus” designed to ensnare Amazon. Governor Jerry Brown enthusiastically signed the bill. The Governor pronounced, “This landmark legislation not only levels the playing field between online retailers and California’s brick-and-mortar businesses, it will also create tens of thousands of jobs and inject hundreds of millions of dollars back into critical services like education and public safety in future years.” Anyone who has followed California's recent financial issues realizes the state sorely needs both.


Meanwhile, Amazon echoed its support for the compromise. In a written statement, Amazon Vice President of Global Policy Paul Misener stated, “This bipartisan, win-win legislation will allow Amazon to bring thousands of jobs and hundreds of millions of investment dollars to California, and welcome back to work tens of thousands of California-based advertising affiliates." It is anticipated Amazon will be welcoming back its California affiliates almost immediately.